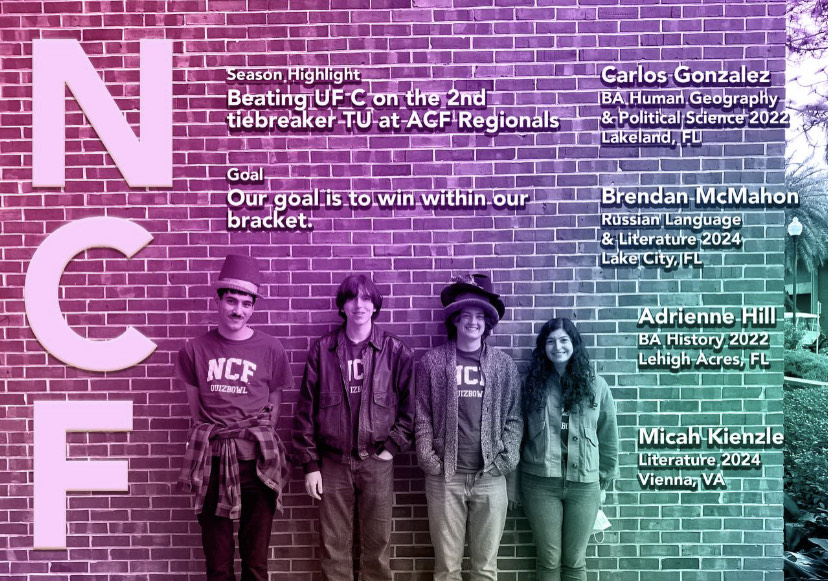 This year's national college tournament took place at the University of Minnesota from Apr. 9 to 10. Photo courtesy of Adrienne Hill.

On Apr. 10, the New College of Florida Quizbowl team continued its impressive legacy by competing on the national level, having already made it past regionals.

“Go ahead, go to the trophy cases at the back of Ham Center, and look for all the trophies Quizbowl has won over the years,” NCF Quizbowl President and thesis student Carlos Gonzalez iconically wrote in a Catalyst Op-Ed from 2020. “Yeah, there are a lot of them… we love to have fun at practices and demolish teams from other schools using the insights from practices.”

Members of the Quizbowl team sat down with the Catalyst to discuss the experience, the format of the competition and their hopes for the future.

“There are levels, tournaments, going from middle school all the way to college,” second-year competitor Brendan McMahon explained. “But it’s just about any sort of really academic topic, or sometimes contemporary culture, the geopolitics of any era, really just any sort of information with a lot of depth.”

“You have to buzz in to answer questions as they get asked,” third-year teammate Micah Kienzle added. “There’s one answer line, and they give progressively easier clues towards that answer line. And the team that buzzes correctly with the answer line then gets the points for that round.”

Kienzle then went on to describe the process of preparing for and competing in the prior regional event.

“We had been practicing for a minimum of two hours per night for all of the Independent study Period (ISP) for Regionals,” he continued. “So that effort paid off. We had the same record in regionals as another team coming out of the tournament, and the tournament director erroneously put us in third place. So we thought we had no chance of nationals after that. But there was a re-score. And then they also expanded the field going into nationals, and we were able to slip in. So it was very exciting for us to find out that we had qualified because we thought we had not, even though we did very well at regionals.”

McMahon and Kienzle then went on to tell of their experience at nationals.

“It was 12 straight hours of gameplay on Saturday, then playing Sunday as well,” McMahon explained. “So it was back-to-back playing. We got 50th place.”

“Overall, we were not winning a lot of games.” Kienzle wryly admitted. “We did technically beat the Massachusetts Institute of Technology (MIT). Their flights were canceled.”

“But what was really rewarding was when you get to the national level, the answer line that they’re looking for is something absurdly specific,” Kienzle continued. “And oftentimes, you hear the answer line, and you’ve never even heard of that concept, or that work or that author before.”

“So it’s very difficult content,” Kienzle concluded. “And being able to actually get a few solid buzzes is incredibly rewarding, particularly like one of our teammates thesis student Adrienne Hill, a student in history. She has been studying Nyerere in Tanzania. Very specific concept. So she was able to buzz and get the Ujamaa answer line. And I think that was a really great way for her to end her Quizbowl career.”