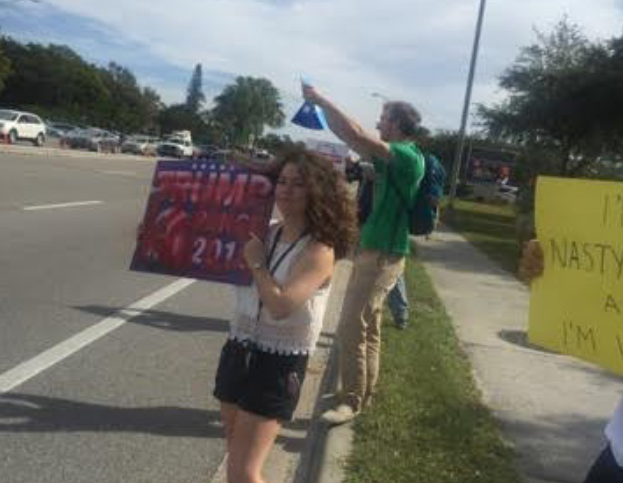 Erika Thompson borrowed red spray-paint to write the word ‘Rapist’ on a Donald Trump sign. It was left to dry and put in the back seat of her car on the way to a Donald Trump rally held in Sarasota the day before the Nov. 8 election.

The second-year Goldstein Resident Advisor (RA) and Counseling and Wellness Center (CWC) representative was just one of the many New College students who protested at the rally. The protesters lined up outside of the arena and waved signs to passing cars on Fruitville who either smiled and waved in solidarity or honked in disagreement.

Although the protesters were all residents from Sarasota, the vast majority were students from New College of Florida.

The night before, a thread had been started on the forum about the rally with the location and time of the event. Students quickly organized a time and place to make anti-Trump posters while others organized a carpool to get to the rally.

“It is important to me because I am a victim of child molestation,” second-year student Kayla Kisseado said about why she chose to protest at the rally. “[There are] over ten claims against Trump, a presidential candidate, its deplorable and outright disgusting. One of those suits was filed by a girl who was allegedly raped violently by Trump when she was thirteen. How is anybody okay with this?

“The only reason Trump became so popular is because finally all of the racist, sexist, xenophobic and other ideologies that have been engrained in the heads of those who think their white skin is superior can finally be said without consequence,” Kisseado continued. “I am terrified. I knew there was hate in this country, I have seen and experienced it. But this, this was out of left field. There is something seriously wrong here. I can’t say anything other than I am absolutely terrified of a Trump presidency.”

The protest was a mix of the constant sounds of cars honking and protesters screaming. At one point, a fight broke out between a student a Trump supporter, who had to be escorted by security.

“I wanted to support people who would not have been able to be there, if that makes sense,” second-year Carolyn Beer said. “I was actually able to handle [the rally] and wanted to be able to stand up against Trump. […] It was really intense and emotional, there was a lot of tension and anger. I don’t think I’ve ever experienced so much anger in people.”

However, many protesters were happy to have been able to participate in such a historical moment.

“[How I feel] looking back on it will depend on who wins the election but, no matter what happens, I think it’ll be a memory that I’m proud of,” Thompson said. “Even if you don’t like politics, it’s important because politics impact your life on a daily basis. Every voice is important and can make a difference.”