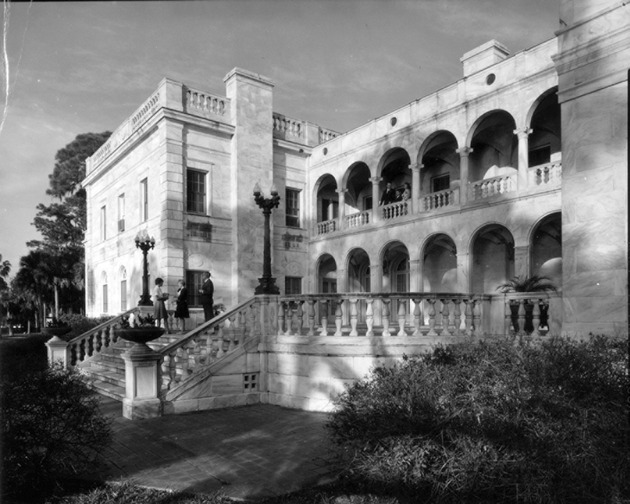 (All images obtained from NCF Digital Collections and Library Archives)

Recent struggles with housing selection have raised fundamental questions about the growth of New College and the quality of residential buildings on campus. Since its beginnings in the ‘60s, our college has evolved into what it is today. But what, in terms of buildings and campus layout, has changed? What is different? What has stayed the same?

In 1964, New College signed a 99-year lease for the land on the residential side of campus.

“All of this land that we occupy is owned by the airport,” Director of Physical Plant Alan Burr said, referring to the stretch of campus east of U.S. 41. “There was a lease agreement with the airport authority in 1964 so the college could operate on it.”

This contract means that New College pays rent to the Sarasota-Bradenton International Airport.

“Not the Fitness Center, just the pool,” Burr said.

In 2007, the college also bought the small strip of land that the Sarasota Classic Car Museum sits atop of.

“We collect rent off of the Sarasota Classic Car Museum,” Burr said.

Burr also pointed out that the college will have to renew the lease in 2063. There are essentially three options that would present themselves to New College.

First, the lease could be extended. Burr speculated, however, that the rate will surely go up because of the amount of improvements and developments that have been made on campus.

Second, New College could buy the land from the airport.

“It will come to a fair market value that both institutions will agree to, and then we’ll lobby the state to buy it for us so we can continue to operate on it,” Burr said.

Third, “we could walk away from it.” This decision would mean that the improvements that have been made on the residential side of campus would become part of the airport, and that the college would have to abandon its eastern side.

Because of this stipulation, recent growth plans have focused on expanding the western side of campus.

The overpass was not in the original campus design plans. Rather, construction started in 1984, followed by the Jane Bancroft Cook Library and the Harry Sudakoff Conference Center. Before the overpass was built, students crossed U.S. Highway 41 to get to the west side of campus.

Because the overpass goes over the state’s road, the Florida Department of Transportation (DOT) owns and operates the structure. The DOT is also liable for people that cross it and pass underneath it.

“Even though we built and paid for it, the actual owner and operator of the overpass is the Florida DOT,” Burr said. “They do an annual inspection of that bridge, just like every other bridge in the region.”

Crossing U.S. 41 daily created high levels of risk for students. There are multiple accounts of people being hit, or at least almost hit, by the oncoming traffic.

“The game Frogger was developed with New students dodging trucks in mind,” alum (‘72) Carolyn Hayes wrote in a Facebook comment.

“I was eventually hit by a car during my second year, when a woman ran a red light at the intersection. She took off, having thought she killed me as my prosthetic leg twisted around my body upon impact,” alum (‘95) Jennifer Latham Robinson wrote.

“There was a lot of concern when I was there about snowbird driving – lots of enormous cars being piloted by extremely elderly people,” alum (‘87) Troy Winfrey added.

The overpass was completed by 1986 and marked a significant shift in student life: the perilous days of frogger-like street crossing were over, though even today some students prefer to bike across U.S. 41.

In June, 1964, New College submitted a proposal to the James Foundation of New York in order to convert the Charles Ringling Mansion (what we know as College Hall) into a library. The proposal stated that “a fine beautiful building is available of community and area renow, richly laden with memories of another age which lovingly and intelligently graced the Sarasota Bay waterfront.” The use of College Hall as a library lasted until 1986, when construction of the Jane Bancroft Cook Library finished.

Before the Jane Bancroft Cook Library started being built in 1984, the area between U.S. 41 and Bay Shore Road was barren.

“The entire triangle of land between the Trail and Bayshore was just scrub with fire ants and sand spurs,” alum (‘71) Steve Jacobson commented.

There were many other buildings that ceased to exist before the early 2000s: the Pritzker Marine Research Center, the Keating Center, the Heiser building, ACE and the Anthropology and Archaeology labs, for example.

“I barely recognize the campus today – there were hardly any buildings on campus 30 years ago,” alum (‘84) Nancy Grossman wrote.

Before the 34,000 square-foot Heiser Natural Sciences Complex opened in 2000, students attended science classes in two small Butler buildings, each perpendicular to one another.

College Drive did not always exist either, and fire ants and sand spurs lined the land leading to College Hall and the bay.

The Academic Center (ACE) was completed between 2007-2011 and marks one of New College’s most ambitious construction undertakings. The building was awarded “Gold Leadership in Energy and Environmental Design (LEED)” by the U.S. Green Building Council for its sustainability.

Academic buildings continue to be developed on campus, but recent projects have helped cement the direction for growth on campus.

Dating back to 1965, the Pei dorms are the oldest residential spaces on campus. If there’s one thing that all New College students and alum share, it is knowledge and experience of these dorms. For a detailed account of the Pei dorms, read Catalyst reporter Cassandra Manz’s article “The History of Pei: Aging rooms desperate for renovations.”

In addition to Pei, B Dorm is one of New College’s first and most memorable residence halls. B Dorm, in addition to Palmer A, B, C and E, was built by 1970 and has always been known for its studious, quirky community spirit.

“I remember [an old Catalyst article from] 1972 maybe. Someone’s cat had crapped on the floor but nobody had cleaned it up, and in a somehow-very-B-Dorm way someone else had made a small sign that said “Cat S***” and stuck it into the cat crap,” Winfrey wrote.

Circa mid ‘90s, some students lived at the Viking, an old motel that was used as a resident space before they built the Palmer buildings.

“For some reason that place totally baffled me. You mean, students are staying in… hotel rooms?” alum (‘89) Cara Ziegel commented.

Dort was built in 1997 and Goldstein followed in 1998, adding new apartment-style buildings to the slowly growing campus.

Recently, a four-day long Growth Planning Charrette provided students and staff the opportunity to talk about the direction of campus planning and expansion. The most important discussions centered around the idea of a multi-purpose facility where the Counseling and Wellness Center and Palmer Buildings currently stand.

In addition, an expansion of the plaza between ACE and the library was proposed. Koski Plaza would stretch across Bay Shore Road and provide a more accessible space for pedestrians.

More housing would be built behind the proposed multi-purpose facility, in addition to a potential outdoor auditorium-style classroom near College Hall and the bay. The new housing, unfortunately, could result in the destruction of B Dorm.

The Growth Planning Charrette helped foster conversation about New College’s campus and the changes that could be made in the upcoming years. Our campus is and will always be changing. History will continue to be made on campus, even if it is at the expense of previous historically “New College” facilities.