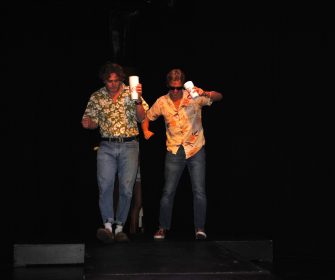 As the sun was setting, the Black Box Theater summoned all students to take a moment to watch their peers perform under blue and purple lights while they strutted the runway in an array of unique outfits.

A notable part of New College culture is reflected in the way students dress. There are a variety of styles students rock that are both trendy and original. However, stereotypes implemented to define the clothing styles at New College have caused students to question this aspect of the school’s culture. In an attempt to discover what those stereotypes are, a New College Fashion Show was held for the first time in the Black Box Theater on Saturday, Feb. 29 to celebrate the diversity of clothing students are drawn to wear.

The idea to host a Fashion Show came from third-year Tommy Finnan when he was told that he didn’t dress like a typical New College student.

“So it got me thinking, ‘Well, what does the typical New College student look like?’ and just by looking around you can tell right away that everyone dresses differently,” Finnan said.

“When I brought the idea up I didn’t think a lot of people would be that much behind it or support it, but I was very happy with the turn out,” Finnan said.

“For my first outfit, I wore a shirt that my dad designed in Jamaica and the jacket had floral patterns and plants on it,” Chin said. “The second one was a lot of blues and browns. Those are my two favorite colors to wear.”

When thesis student Maya Holt-Teza strutted down the runway, she displayed the heights of K-pop fashion.

“I basically wear very similar things on a daily basis, it’s comfy, it’s stylish and it’s not over the top,” Holt-Teza said. “Also, it follows the many trends that I like to see when I watch K-pop.”

Third-year Marcela Prado-Zapata shimmered down the catwalk two times to show everyone what type of clothing makes her feel confident.

“My outfits were really inspired by the things I like to wear on a daily basis and the things that kind of make me feel good,” Prado-Zapata said. “So my first outfit, it represented feeling good and it’s comfy, and then on the second outfit makes me feel good too.”

As students flaunted their outfits that were faintly dyed from the colored lights, supportive students clapped and hollered for them.

Some students also recognize the changes in styles as years pass by.

“During my first year the fashion was very one-note, a lot of people wore similar things to each other, and not that that’s wrong, but as we’ve gone on, I see so many looks nowadays and it’s really exciting,” Holt-Teza noted.

Clothing can also be an avenue through which to explore identity.

“I actually really like that New College fashion tends to be very experimental, but everyone takes that in their own direction which is cool,” Prado-Zapata said.

The styles students create to shape New College fashion on and off the runway can’t be tamed.

“It’s hard to describe, but I mean as long as you can express yourself without being pressured to be anything other than yourself, that’s what New College is about,” Finnan said. “So even if you’re expressing yourself through your clothing, that’s New College fashion.”

The first ever New College Fashion Show was a success. It has also inspired Finnan to think about making the show a recurring thing.