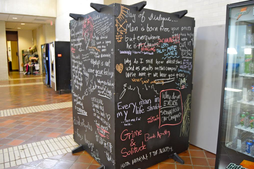 “Everyone has a place in the conversation” is the theme of the Day of Dialogue (DOD), an event that is meant to help students, staff, faculty and administration find ways to communicate better. This event will feature breakout groups on specific issues such as racism, sexism and dealing with trauma. Trained students will facilitate the event. Social justice worker, Micah Hobbes Frasier, will be the head facilitator. The event will be held in Sudakoff on April 4. All who are a part of the community are welcomed to participate.

“What is the organism that is New College?” Professor of Music Maribeth Clark asked. “What is it about it that we really appreciate and want to keep going? What can we identify as limiting?”

“Our goal for DOD is to come together with faculty and staff to learn tools for more effective conversations,” Paige Pellaton said. “We’re looking to teach ourselves some norms about hard conversations, about vocabulary, etc. We want to talk about the Forum, the substance use on campus, accessibility, racism and sexual assault.”

Pellaton said that she hoped many people would attend the DOD, and that since faculty and staff are encouraged to come, she hoped students would follow suit.

Other students such as second-year Miles Iton were also involved in the planning of the DOD.

“We are trying to plan the Day of Dialogue as different than any other past events we have held such as teach-ins,” Iton said. “It is a matter of the community talking within itself.”

Iton explained that the DOD was largely about figuring out how to have conversations. He said that the organizers want to figure out how to communicate, then go on to find solutions to on-campus problems the community can agree with.

“I want to be able to bring something to New College that helps us help each other,” Iton said. “I want us to be able to know how to have these dialogues with each other. How to agree, disagree and go about things in a way that is healthy and beneficial to all.”

Frasier will focus on body movement and considering differing ideas. Frasier has worked in social justice and has served as a doula. He works in somatic learning and according to his website, “helps interrupt, and transform trauma and violence in our families and communities.”  The website also states that “His work actively engages people in integrating new concepts and learning new skills, while also identifying and building on the strengths, resilience, and skills they already have.”

A major point of the DOD is to have hard conversations. The DOD seeks to tackle these conversations head on in a healthy way for both individuals and the community.

“The [goal] is to try to get to a place where we move from the intellectual framing to the more emotional,” Clark said.

Clark hopes that the event will allow for community members to express how campus happenings are affecting them emotionally. She thinks this is the first step to addressing issues as a community. Clark expressed said that she hopes participants will come away from the event understanding, or at least acknowledging, a new viewpoint.

“In general the hope is to reflect on the idea on how to have positive conversations,” Clark said. “To move to a place where we can actually listen to each other. In some ways, the content matter does not matter as much as the idea of process and conflict resolution.”

Since trauma is often inevitable, a portion of the event will be addressing how to move forward. This skill is important for communities and individuals.

“Resilience, building on resilience and imagining positive processes for the future and positive possibilities for the future.” Clark explained that she hoped that this event would not be solitary. She said she would like to see the Day of Dialogue continue and grow.

“We just want people to think this is good work to do and important work to do,” Clark said. “Whatever we start we keep going.”

Event discussions were decided in various was. A campus-wide survey was sent out asking what people were interested in discussing. Black chalk boxes were placed throughout campus where students could write what they would like to talk about. Neither of these ways of communication guarantee that community members would write anything positive, but they revealed many of the feelings NCF community members hold.

Professor of Philosophy April Flakne has been preparing her Diverse Dialogues philosophy seminary class for the Day of Dialogue since the start of the semester. She was asked if the class would like to be involved, since the content of the course deals heavily with the first amendment.

“[For those in the class], it will be a hands on exercise for us to apply things we have been thinking about philosophically and legally to regulating our community lives,” Flakne said.

Flakne said that the course addresses how law and justice sometimes clash with each other. The course also focuses on how that affects people, and even directly looks at how this affects the New College community specifically. Flakne hopes that this lens could lend some insight to the DOD.

“I had come up with the class as a way to address problems that were being expressed to the faculty,” Flakne said. “There was a sense that students were having trouble articulating what was going on.”

She described tension between how students were encouraged to express free speech and learn to be politically correct. Flakne explained that having students from her class approaching the DOD with a philosophical view on the horizon would be helpful for encouraging dialogue that is both expressive of the lives people are living and the issues they face, while working within an intellectual frame work. She believes this may lead to better discussion and understanding.

“The discussion leaders will be able to have a touchstone of intellectual background that can be reached,” Flakne said.

“I am a supporter of the DOD,” Flakne added. “But I do feel because of the disconnect between the students and faculty, what they do and don’t know about, that it is really important to do.”

Other goals of the DOD include providing faculty and staff with information on issues that are impacting students, and fostering an understanding of how dialogue shapes living spaces and institutions.

“What I am most interested in is how do people get to that place where they hear each other and let ideas and thoughts change them,” Flakne said.

She expressed that DOD was largely about the community being cognizant of communication and letting diverse perspectives be heard. Flake explained that the desired communication would be communication that the participants were aware of and accepting of.

“We are still in the process,” Clark said. “There are so many issues. One of the more important things is having a structure for the day and figuring out what we can work on in a more focused way.”