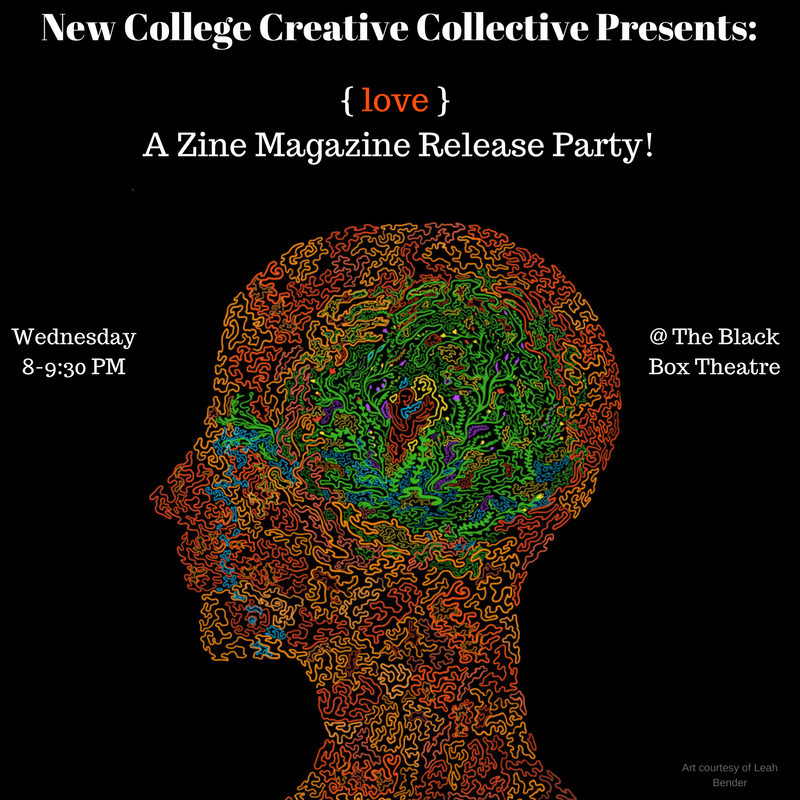 The New College Creative Collective (NCCC) was founded by Myles “Optimystic” Rodriguez and Thomas Ghebrezgi who were both first-year transfer students when they met in the Fall of 2016 during Orientation. Quite instantly, the two formed a collaborative union held together by their fondness of the arts and self-expression. Thus, the Collective was born and its first Creative Anthology is set to release in mid April.

The anthology is an artistic magazine encompassing as many forms of art as possible, whatever can be supplied by the New College student body. Over 20 pieces submitted by students will be included ranging from photography, digital art, sheet music and creative literature. Keeping the spirit of the school’s official unofficial mascot (the empty set), the magazine is titled { }: A Creative Anthology with the space between the two brackets being filled with the overall theme of the issue. For its first volume this is {Love}, a theme democratically voted upon by the club.

“We wanted to give students at New College that creative outlet. We want to give them a place to write, to express, to demonstrate all the different ideas or forms of art in a way that was legitimate,” Ghebrezgi said. Hinting at the fact that other nearby schools have such platforms for artistic expression like this he adds, “We’re a state school. We deserve this.”

The main objective goals for the group of artists is to provide a support system for all artists on campus to keep accountability of each other; making sure expected personal goals of creation are met. That collaboration amongst artists could be more easily facilitated, connecting talents via the Creative Collective. However, debatably, their most important objective is to enhance the creative curriculum on campus.

“People put so much time and energy into their creative projects so why not make that a part of the curriculum,” Rodriguez said.

Unsatisfied with the fact that most (of the limited) artistic classes revolve around simply learning the theory and history of the disciplines, Rodriguez and Ghebrezgi created the NCCC as a way to encourage the expansion of artist’s endeavors in this school. They are more concerned with the actual manifestation of and production of the self-expression, the kind of boundless, limitless formation of art that could ideally be incorporated into students’ Areas of Concentration.

Many difficulties were faced in trying to put this project together especially since the majority of those involved with its creation had little to no experience with organizing a publication of this magnitude. Allocating funding, setting effective meeting times for everyone, printing out posters and so on had the NCCC learning every step of the way. Still, a special shout out is given to second-year Araya Barnes who had first brought up to Rodriguez the idea of making an artistic magazine and, having had experience in the matter, they assisted tremendously in the fruition of the Anthology.

There will be 50 physical copies distributed at a release date party in April in the Black Box Theatre starting tentatively around 8 p.m. However, there will also be an online PDF version of the magazine for easy and wide accessibility to all students as well as a handful of copies that will be left around campus for the public.

The group meets Saturday evenings around 7 p.m. for whoever is interested. It is an extremely accepting club that believes all students of New College are already unsuspecting members according to the founders themselves. As for future endeavors, the NCCC will be working on having a class in tutorial form that would be solely dedicated to producing a literary magazine every mod, so two per year.

“[The Creative Anthology] made me excited about the creative and artistic potential of this school,” Ghebrezgi said.