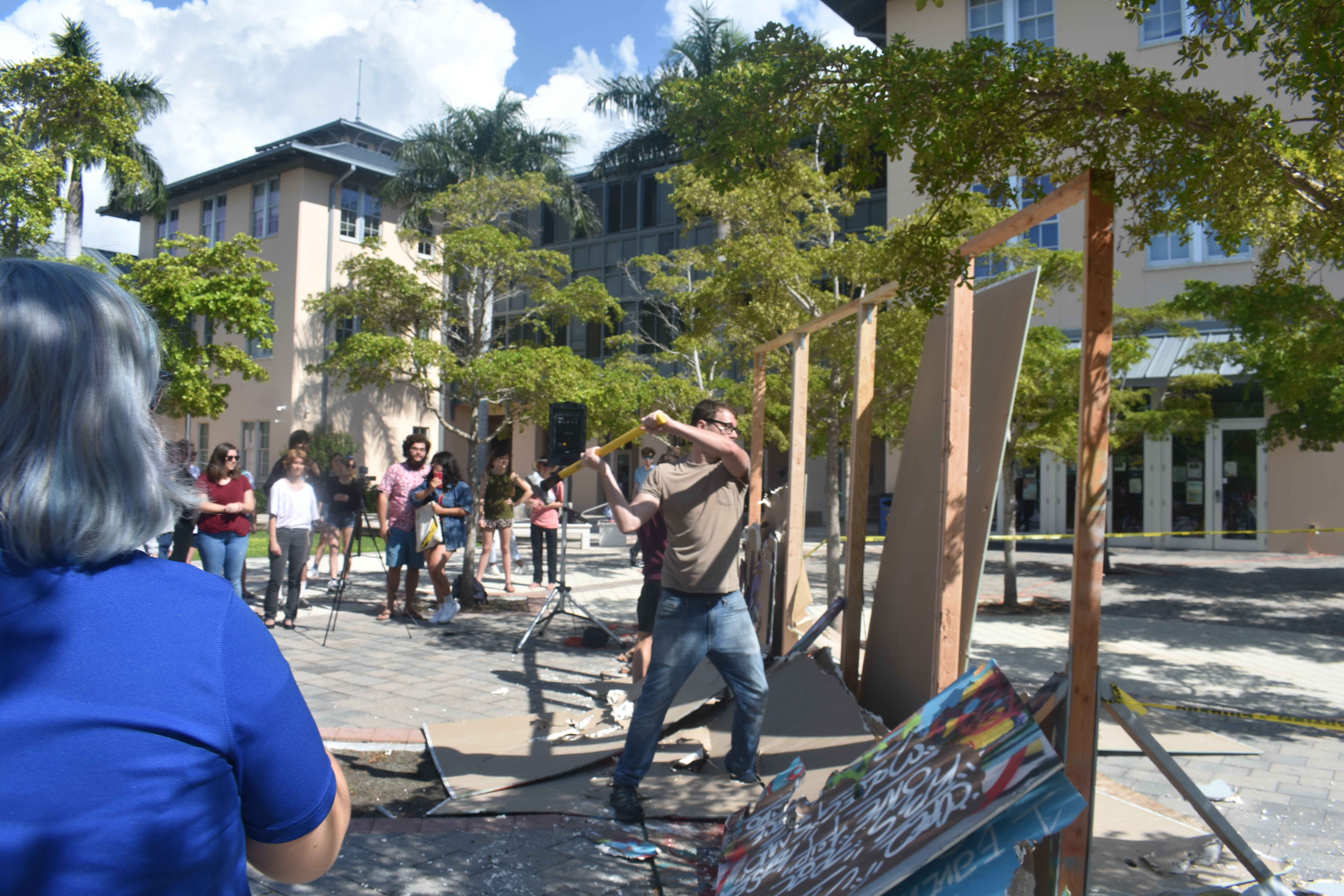 Students took turns striking the west side of the wall with a sledgehammers. Photo courtesy of Anna Lynn Winfrey

On Nov. 8, students took sledgehammers to the on-campus replica of the Berlin Wall that was erected in Koski Plaza as part of Professor of German Studies Lauren Hansen’s Berlin Wall in German Literature and Film course. The destruction of the replica honored the 30-year anniversary of the Iron Curtain splitting East and West Berlin being lifted.

Hansen’s class focused on the media impact of the Berlin Wall; the research manifesting in a 7-week art installation “The Berlin Wall,” to serve as an educational platform for the campus and what it meant to the people it stopped. Throughout the past few weeks, students tagged the wall with a colorful coalescence of public expression, honoring Berlin’s troubles with division, power, and obedience.

The replica was 8 feet tall and 16 feet wide, and was tactfully placed to have the plain gray side face east and the spray-painted side face west. It reflected the heavily-restricted East Berlin suffering from heavy censorship over artistic and intellectual expression and how, in contrast, West Berlin channeled art as a means of protesting the divide.

The theatre and literature scene of East Berlin through the German Democratic Republic’s existence was vibrant, but many creatives had their projects and livelihoods rejected on the basis of treason.

“That’s why on the west side you could walk right up and graffiti it,” Hansen said. “We’re kind of adhering to cardinal directions.”

In addition to exploring the state of Berlin in the 1950s and 1980s, the Berlin Wall in German Literature and Film course investigates how the wall divided Berlin in terms of wealth, culture and politics through cinema and literature. Hansen has taken the opportunity to host related events, using the advantageous location of the wall as a physical platform for student presentations, speeches and movie nights.

“A challenge with this project is I want to transfer the knowledge from the class to the wall out there, so that people know what it is,” Hansen said. “At this point, everybody knows that’s the Berlin Wall. But they should know more about it.”

Recap of the programming

Initially after the replica was erected, Hansen invited students to graffiti the west side of the wall on Sept. 11. The prompt was a personal interpretation of the statement, “If there were no walls, there would be…” Students responded colorfully, one writing, “No gods, no masters, no borders, no walls.”

During the fourth week, the featured theme was “democracy,” which was decided through a collaboration between the classes of Professor of Chinese Language and Culture Fang-Yu Li and Professor of Chinese Language and Culture Jing Zhang to raise awareness of the recent Hong Kong protests over the April bill suggesting extradition to Mainland China, a part of the rising requests for more civil liberties. The situation does not involve a physical wall, but the issues of civil unrest and division are reminiscent of Berlin’s past, “Even if it doesn’t include a wall, the Berlin Wall encapsulates a lot of these recurring ideas and themes,” Hansen said.

The spray-painting continued through week five. On Sept. 26, students gathered to watch “The Lives of Others,” a movie about a Stasi officer who becomes obsessed with the life of writer Georg Dreyman and his wife, actress Christa-Marie. The extent of the extreme surveillance methods and data collection are portrayed through the movie.

During the sixth week, the theme of “migration” expressed that both humans and animals have a right to free movement. This was introduced via Hansen’s email, “Thank you to Professor [of Philosophy and Environmental Studies] Delon’s Environmental Ethics class for coming up with this week’s theme to highlight how borders, especially a wall, impinge on humans’ and animals’ rights to mobility and disrupt ecosystems and migration patterns.” Thursday of the sixth week featured a reenactment of the 1987 Berlin Wall Speech by Ronald Reagan in West Berlin, which pressured Gorbachev to pacen the collapse of the divide. The speech was performed by second-year Noah Opalsky and introduced by Professor of History Brendan Goff on Oct. 3.

“Nunca Mas” was the theme for week seven, in collaboration with one of Professor of Political Science Amanda Fidalgo’s courses, named after the government report on the human rights abuses during the Dirty War in Argentina. Over 9,000 people were declared missing during the military dictatorship; those with dissenting opinions and those deemed as troublemakers disappeared under the regime. “This dictatorship and others were openly supported by the U.S. in a bid to ensure that Latin America didn’t become communist during the height of the Cold War,” Fidalgo explained.

During the weeks of October, the wall became even more heavily used during the sessions, as students relayed their designs, graffiti skills and frustrations. During the eighth week of Oct. 24, the theme of “Police State” was brought to the wall, reflecting the psychological impact of surveillance by the Stasi, East Germany’s secret police. Screenings of “Barbara” and “The Lives of Others” were shown at the plaza, maintaining the theme of police infringing the rights of citizens.

For the second to last week of the interactive exhibit, the idea of peaceful protest was explored during a collaboration with Professor of Religion Manuel Lopez Zafra’s religion class. Martin Luther King Jr., Gandhi and the Dalai Lama were spray-painted on the wall, and through email the context of the choice was explained. “The Protestant Church in East Germany had played a pivotal role in these peaceful protests, the most famous example being St. Nicholas church in Leipzig. It had been one of the few spaces where political dissidents could voice their dissatisfaction with the regime in East Germany. Having met weekly since 1982 for “peace prayers,” as they called them, the congregation finally took their meeting to the streets on Sept. 4, 1989, kicking off the so-called “Monday Demonstrations” that began to spread to other cities in East Germany. In Poland, Pope John Paul II’s visit in 1979 inspired the Solidarność (Solidarity) movement in the early 80s.”

After ten weeks, a series of events commemorated the anniversary week of lifting the Iron Curtain in 1987 Berlin. The final spray-painting session used the theme of unity. On Nov. 4, third-year Emma Sunderland and Catalyst Copy Editor Anna Lynn Winfrey recited East German author Christa Wolf’s Alexanderplatz speech. The speech caused Wolf to be “viewed as somewhat of a prophet by the East Berliners,” according to Sunderland.

“She wrote very tactfully about the government at the time in a way that wouldn’t anger politicians or get her work censored,” Sunderland said.

Wolf’s work takes a complex perspective on the politics of East Berlin, the voices against the wall mainly circulated were strictly capitalist or authoritarian.

“She was in favor of socialism, which many citizens were skeptical of, but she also wrote in a way that felt very personal to people which allowed them to be open to her ideas,” Sunderland said. “When she gave this speech in Alexanderplatz, nobody knew that the wall would fall only five days later. In retrospect, I believe that this made the speech all the more special. It gave the people hope.”

Wednesday morning’s last spray-painting session featured the theme of unity, and featured several people presenting on the topic of East German surveillance. The Stasi had over 200 employees and was heavily associated with the previous Russian secret police, the Cheka.

“64 percent of the people had lasting depression and trauma related to the surveillance, and it really had a psychological impact on Germany as a whole,” third-year Daisy Talbert said, using a poster to accompany the presentation. “It was considered a threat to individuality and freedom.”

Additionally, a six-minute deliberation of the New College Berlin Wall was featured on WUSF 89.7 on Nov. 4. In the last Thursday night movie screening, the wall hosted a movie showing of “Goodbye, Lenin!”

On the final day of the wall’s presence on campus, students gathered at 11:30 a.m. for the final presentations. Koski Plaza was both hot from sunlight and cold from the falling temperature.

“Who’s gonna be David Hasselhoff and get on that wall?” third-year Rigel Clapps asked.

Students were eager to see the demolition, excited by the opportunity to smash the wall, or really, anything, down. After three speeches were made by students and a guest speaker, Professor Hansen thanked all for participating in the installment. Two sledgehammers were passed around as all were encouraged to break down the wall.

The real “Day of Fate” (Schicksalstag)

A 2017 study from the University of Berlin suggests that approximately 327 people died attempting to cross from East Germany. The gap in quality of life in East Berlin and West Berlin was daunting for many enduring the change of a new regime many were dissatisfied with. After World War II, Germany was split into four occupied zones: France, Russia, America and Britain.

The Truman Administration distributed funds through the European Recovery Program “The Marshall Plan”; however, only countries outside the Soviet Union’s sphere of influence received credits essential to rebuilding the devastated cities and systems.

“While the West got a lot of financial assistance to help rebuild, the East oriented itself to the Soviet Union. It was in 1949 when the ideological divide really started, East versus West, and Germany was situated on the faultline,” Hansen said.

Stalin refused to accept any credits from the United States, in fear of economic interaction tempting the Eastern bloc away from the strict dogma of Soviet economic policies.

East Berliners were frustrated with the tumultuous, strict regime; the separation of friends, families and communities is featured in the movies shown during the programming, such as “The Lives of Others.”

In addition to suffering the greatest loss of life during the world’s deadliest war with an estimated 26 million dying, the Soviet Union faced challenges in adopting a controversial and unprecedented economic system.

The destroyed city of Berlin embodied the spirit of the crisis at the time, and the Berlin Wall signified a physical crack in the city, fracturing into two different worlds. The ruins are a reminder of a cruel 96-mile divide enforced by fear, conquered by rising resentment.

Today, the space has grown back into one whole Berlin; however, not all has been demolished. Artist Dmitri Vrubel’s “The Kiss of Death” depicts a kiss between General Secretary of the Communist Party Leonid Brezhnev and General Secretary of the Socialist Unity Party of Germany; two opposing leaders kiss each other surrounded by words and phrases both German and Russian. The mural, cited as the most famous work on the East Side Gallery, is painted on the 1.3 kilometer stretch of remaining wall that now serves as an artistic opportunity to promote peace and commemorate the mistakes made in the period; for 7 weeks, the platform of the Berlin Wall in the ACE Plaza brought the same space to life on campus.

Info sourced from National geographic’s instagram (i need to cite this prop) https://www.instagram.com/p/B4ps2fYnojB/