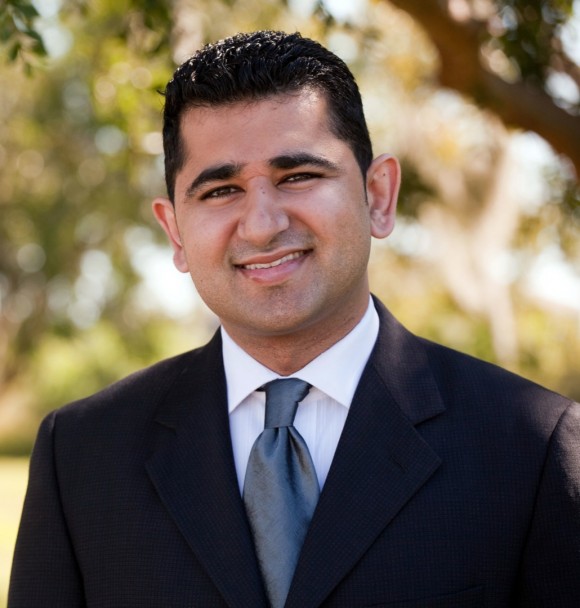 Election Day is right around the corner, and voters in Florida’s 67th state congressional district have the chance to elect a New College alum to the state House of Representatives.

Zeeshan Javed “Z.J.” Hafeez (’05) is a Democratic candidate seeking to represent a predominantly Republican district held by Speaker of the House Pro Tempore Ron Reagan (yes — that is his name), a Republican from Bradenton. The Catalyst first spoke with Hafeez in October 2009, where he detailed his plans for the election. Now with the big day fast approaching, Hafeez has been endorsed by both the Sarasota Herald-Tribune and Creative Loafing and is optimistic of his chances of victory.

“We really have been getting a lot of support,” he said. “Wherever we go, we are getting a great reception. The Democrats love us and are supporting us. It’s like a well-oiled machine now and we’ve raised over $100,000 — we have a 10-to-1 cash-on-hand advantage over our Republican opponent right now because he bankrupted himself in the primary.”

Unlike many other Democrats in Florida, Hafeez does not support Amendment 4, or as it is commonly called, “Hometown Democracy” (for an explanation of this and other amendments on this year’s ballot, visit http://ncfcatalyst.org/?p=519).

“I agree with Professor [of Political Science Keith] Fitzgerald’s analysis on this amendment,” he explained. “It is bad economically. It will hurt businesses in a bad economic time. It will cost the voters with all of the votes on everything. It is bad for democracy and our democratic process that is in place. We hire county commissioners and planning board members to make these decisions — we hire and elect them. We are taking away from their decision-making abilities. It also hasn’t worked in the past, like in St. Pete Beach. It’s just plain bad for Florida.”

When asked if the growth and development process in Florida needed to be reformed, Hafeez said that it did but that Amendment 4 wasn’t the way to do it.

Among other items on Hafeez’s agenda is to maintain a ban on offshore drilling in Florida and a plan to create a localized version of Teach for America in the Sunshine State, along with other educational reforms. “My ‘Teach for Florida’ proposal would partner recent Florida college grads with rural and disadvantaged schools under the supervision of local university education programs, allowing them to earn a master’s,” he said. “Education is my top priority because I believe it will reopen the door to the American Dream for all Floridians. The door of opportunity has been shut in their faces. I believe we should replace the FCAT [Florida Comprehensive Assessment Test] with end-of-the-year subject exams. We should be careful with changing class sizes. We should increase teacher pay and we should use merit pay only if it is based on end-of-the-year analyses that are comprehensive and localized, done by principals, administrators and peer-review with a system of narrative evaluations like New College instead of grading like the FCAT.”

“This is a very important year,” Hafeez said. “This is a very important campaign. This is an open seat and anything is possible. Professor Fitzgerald won an open seat in a Republican district through hard work and hard efforts and in 2008, the nation showed anything was possible. Hard work, determination and organized efforts elected an African-American man with the name Barack Hussein Obama — if this is possible in America, then anything is possible. A Z.J. Hafeez can be elected to represent the 67th district through the same hard work, determination and organized efforts and reopen the doors of opportunity and with the keys to the American Dream for the people of our community, district 67 and the great state of Florida. It’s a true New College story — we are the underdogs.”

Students wishing to get involved with Hafeez’s campaign may e-mail field@votezj.com or call 813-633-2010.