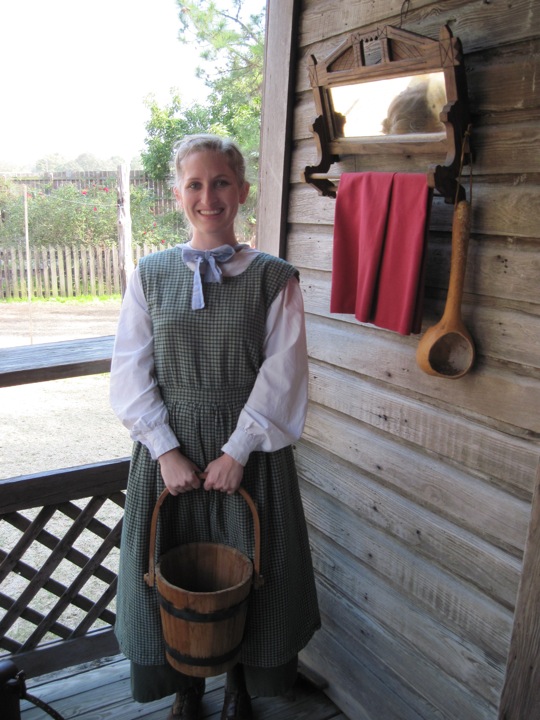 Alum Miranda Bailey (’06) thinks she has the best job ever. “It’s awesome,” she said. “I get to work on my embroidery, talk to visitors all day and hang out with some really cool people.” As Bailey swings back and forth in her rocking chair, a woman in costume spins cotton thread on a spinning wheel across the room. Just a few feet away, touch-screen monitors display images of early African-Americans. This exhibit is Bailey’s contribution to the Cracker Country living history museum. Located at the State Fairgrounds in Tampa, Cracker Country intends to preserve Florida’s rural heritage. Buildings dating from the late 1800s to early 1900s are scattered across the campus and interpreters in period clothing portray early life in Florida.

When Bailey started working at Cracker Country in January, she noticed that there could be more information about African-American Floridians.

“They had designed an exhibit with wall panels and posters about African-American sharecroppers, set to open at the State Fair this year,” she commented. “But there was only one page on the Cracker Country website and it was pretty bare.”

Bailey decided that African-American heritage needed a more prominent place in the history at Cracker Country. She began to research on the Internet and flipped through books the museum had on hand. This wasn’t Bailey’s first time researching early rural Florida life — her thesis focused on early citrus growing heritage and the inheritance of farmland from father to son. Working quickly with the State Fair deadline looming, she helped expand the first African American History exhibit to be shown at Cracker Country.

“I put together a touch-screen exhibit and worked on the website,” she said as she continued to work on her embroidery. “Hopefully with some more funding, we can put in something permanent. I think people are a little surprised by the touch-screen technology. You look around and see all of this history — and then there’s two computer screens sitting against the wall. I’m in a uniform instead of a costume.”

After visitors explored the touch-screen tour of African-American history, they were invited to evaluate the experience with a survey.

Working as a museum administration intern, Bailey shares the stories of early Floridians. It’s very different from her previous job as a museum attendant at the Ringling Museum. “I stood in the galleries,” she said. “I pretty much made sure that people didn’t touch anything.”

At Cracker Country, not only does Bailey get to mingle with cotton-spinners — she also meets chicken farmers, candle-makers, bee keepers, and broom-makers.

“It’s been really fun working with the people demonstrating old crafts and trades,” she said. “One of the people making corn shuck mops and brooms told me about an establishment like Cracker Country in north Florida. It completely focuses on the African-American experience. He said many of the activities they demonstrate are the same, but the materials they use are different because of the different resources available to African-Americans in that time period. He said there have been anthropologists up there on many occasions writing down stories and folk music.”

At the beginning of the fair, Bailey wore jeans and a light-blue polo with the Cracker Country logo. “I think things would have been different if I was wearing a costume,” she said. “Everybody else is wearing dresses and aprons and there I was wearing normal clothing.”

It wasn’t until the last few days of the State Fair (which ended on Feb. 21) that Bailey finally got her costume. Dressed in a simple green-plaid dress with a blue bow around her neck, Bailey blends right into the living history museum.

“After the fair is over school tours will start, so I’ll be helping out with that,” she said. “And now that I have a costume, I can do real docent duties! The other day they had me showing little kids old-fashioned toys. That was [lots] of fun!”

Bailey not only loves sharing her knowledge with Cracker Country’s visitors — she also enjoys hearing their stories.

“Working with the public reminded me why I love anthropology,” she said. “Some people came in and told incredible stories! One afternoon I was working in the Terry Store, which was built in Fort White, Florida in the late 1800s and sold goods until 1988. In 1992 it was moved to Cracker Country. A woman came in and told me that she shopped in the store with her grandmother when she was little before it moved to the fairgrounds. She and her husband stood in the middle of the room and gazed out the front door, and described to me what was outside the store when it was on U.S. 27.”

With the fair over, Bailey will have more time to add information to the African-American history exhibit.

“I didn’t have much time to write everything up and had to do everything really hurriedly [before the fair],” she said. “Hopefully after the fair I’ll have a little more time to do things more thoroughly. I want to have a list of informational resources on the website for further reading and a list of other African-American historical sties in Florida.”

If you are interested in visiting the living history museum, visit www.CrackerCountry.org to find a list of events. They are open to visitors on select Saturdays throughout the year. Further questions can be directed to Jennifer Becker, the Programs Supervisor, by calling 813-627-4225.