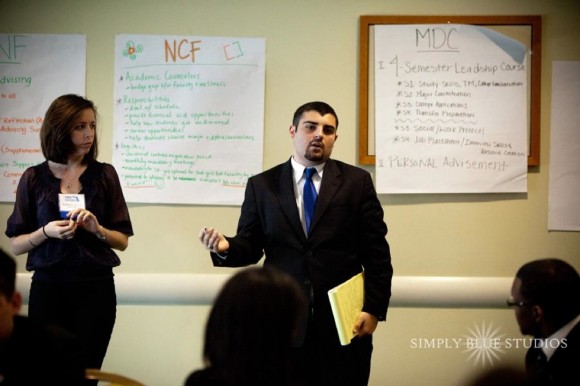 New College loses a considerable amount of students before their graduation year for numerous reasons. First-year Kyra Murrell, who plans to transfer to the University of West Florida (UWF) this upcoming academic year, will be one of those many. Murrell plans to get married this summer, and has decided that moving back home will be a more cost-efficient option. “I also feel that I would excel more academically at UWF because I want to major in chemistry, and they have a stronger program,” Murrell said. “Even if I wasn’t going to get married, I think I would still transfer to another school.  I have enjoyed my time at NCF and made some great friends, but I am interested in a campus with more people.  The small community was one of the reasons I chose the school, but I have learned that I am somewhat picky with the people I become friends with and I feel like there are only a couple people that I have really connected with here.”
According to the New College of Florida 2010-2011 Annual Report, the graduation rate in 2008 was 68 percent. The First Time in College retention rate for the class of Fall 2010 was 86 percent. By 2013, the first year retention rate is targeted to be 90 percent.
The New College Access Network (NCAN), an organization recently started on campus, aims to examine the issue of improving these rates, as well as other relevant educational policies within New College and the state as a whole. NCAN is a chapter of the Florida College Access Network (FCAN), a state-wide organization with the goal of improving graduation rates among all students, especially those that are underrepresented, low-income or first-generation students. Out of the nation’s 10 largest public university systems, the State University of Florida ranked fourth in graduation rates in 2010.

Second-year Anthony Serifsoy, along with a few other students, including members of the New College Student Alliance Cabinet, attended FCAN’s Florida Student Education Policy Conference this past February, where they discussed educational policies with other state colleges and how students can have a voice in the policy-making process.

“NCAN came about after we attended this conference,” Serifsoy said. “The University of Florida talked about their program, called Gators CAN, and called upon other schools to set up similar access networks within our campus. After the conference, I decided we should probably set one up here.”

NCAN shares many of the same goals as FCAN, but Serifsoy would like to utilize NCAN as an outlet for discussing and taking action in education policy, whether that be for internal or state-wide policies. Serifsoy is eager to begin working with FCAN and other chapters to start holding events where all schools can participate in the state policy and legislation formation.

“Our school doesn’t have a lot of outlets for this kind of student involvement,” he said. “Eventually, once these other organizations set up, we can actually link our programs together. By linking them together we can actually become a force in Tallahassee. Right now the student voice is fractured because all the different schools are saying some of the same things, but all of them have different things they want, and they’re approaching Tallahassee in different ways.  We have things like Rally in Tally, where students come forward, but it’s usually not any type of centralized action. It’s more of everyone just coming and talking about what they’re going to do. So the idea behind this is that we are going to grassroots-mobilize all the universities and schools in the state at once and really pressure Tallahassee to get some good change for students.”

NCAN will also be an opportunity for students to have a voice in educational policy concerns within New College. “One of the first plans of action of NCAN is this idea of a new advising structure, possibly,” Serifsoy said. “At the conference, we were asked to bring our own internal issue and we found that the advising system was something that may have hurt first-year retention.”

NCAN is currently refining the details for the proposal of a new advising structure for first-year students. “We plan to contact the Provost’s office soon and talk about that proposal with the intention of eventually bringing it to the student body,” he said. “Once we get it refined, we are going to try to take it to the faculty and see what the faculty thinks about it and hopefully get some policy changed done in the school. But I also want to stress that’s not the only mission. We are doing multiple things at once this is a year-and all next year long project and we’re also open to including any new ideas that anyone might have.”

NCAN has begun regular meetings where students are encouraged to bring up any issue. “I really want to give students who aren’t necessarily involved through student government an outlet to express and advocate any changes they feel like need to happen,” Serifsoy said. “I want student input that the whole point of this is that we are students and we represent the student body of New College and the greater student body in Florida as a whole.”