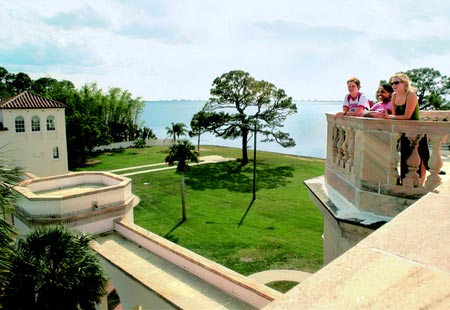 Recent rankings by various news sources and organizations have listed New College as one of the top liberal arts colleges in the United States.

In the past few months New College of Florida has received rave rankings and reviews from news and college ranking organizations such as  Mother Jones, the Fiske Guide to Colleges, and NBC’s Today. They praise NCF’s reasonable price, idyllic campus and top-notch academics.

In the Aug. 22nd edition of Parade, a Sunday newspaper supplement, NCF was described as possessing a “private college experience at a public-university price.” For its rankings, Parade asked High School counselors to recommend great colleges that “fly under the radar.” NCF appeared third on the list for small public schools along with the College of Charleston in South Carolina, The College of New Jersey, St. Mary’s College of Maryland, SUNY Geneseo in New York, the University of Mary Washington in Virginia and the University of North Carolina-Asheville.

NCF was featured in Mother Jones, a nonprofit magazine that focuses on political and social justice reporting. The article that highlights the college is titled “Mojo Mini College Guide” and lists schools that “will blow your mind, not your budget.”  Mother Jones describes NCF as a haven for “brainy beach bums” and as “The Sarah Lawrence of the South.” The magazine further praises NCF for its high per capita ratio of Fulbright Scholars and low cost.

On Aug. 18, Forbes ranked NCF as 15th among the country’s top public colleges and as 10th as a best buy college. This is the third consecutive time that NCF has been featured in Forbes’ rankings. Along with releasing its “Top Public College” and “Best Buy” list, Forbes stated that, “In the last 20 years tuition and fees at America’s four-year institutions have exploded, growing 91% beyond the rate of inflation.” Forbes’ statement reaffirms the value of NCF to its students and how fortunate the student body is to be immersed in an intimate, innovative academic environment without the hefty cost of private school.

The Fiske Guide to Colleges named NCF a “best buy school” on July 7th. The 45 schools featured in Fiske’s rankings are located across the U.S., Canada and the United Kingdom. NCF is one of 21 public colleges in the list and has been ranked a Fiske “best buy school” since 2003. Fiske is independent of college consulting or advertising and strives to help students find the best college to reach their goals and aspirations.

Last January, NCF was ranked third for best public value college on the NBC’s Today. On air, host Matt Lauer said that NCF is a, “love letter when it comes to financial aid. Tuition is low for in-state students, just under $5,000 per year, and it’s a deal for out-of-state students as well.” The school was one of only six best buy colleges featured on the show.

Bing Travel recently included NCF in its list of 18 Scenic Colleges and Universities. Bing attributes NCF’s beauty to its bayside location, historic 20’s era mansions and modern I.M. Pei buildings. The article states that NCF is the place for students searching for “a school with books, beauty and beach in a package deal.” A sun-dappled picture capturing the bay and a group of NCF students accompanies the article.

Though NCF is flattered by and appreciates its many rankings, Associate Director of Public Affairs Linda Joffe says, “We don’t want to be beholden to these rankings or to ever do things at NCF simply to appeal to rankings.” She explained that the first and foremost goal of the college is to foster an environment that encourages student-faculty collaboration and independent, inspired thinking.