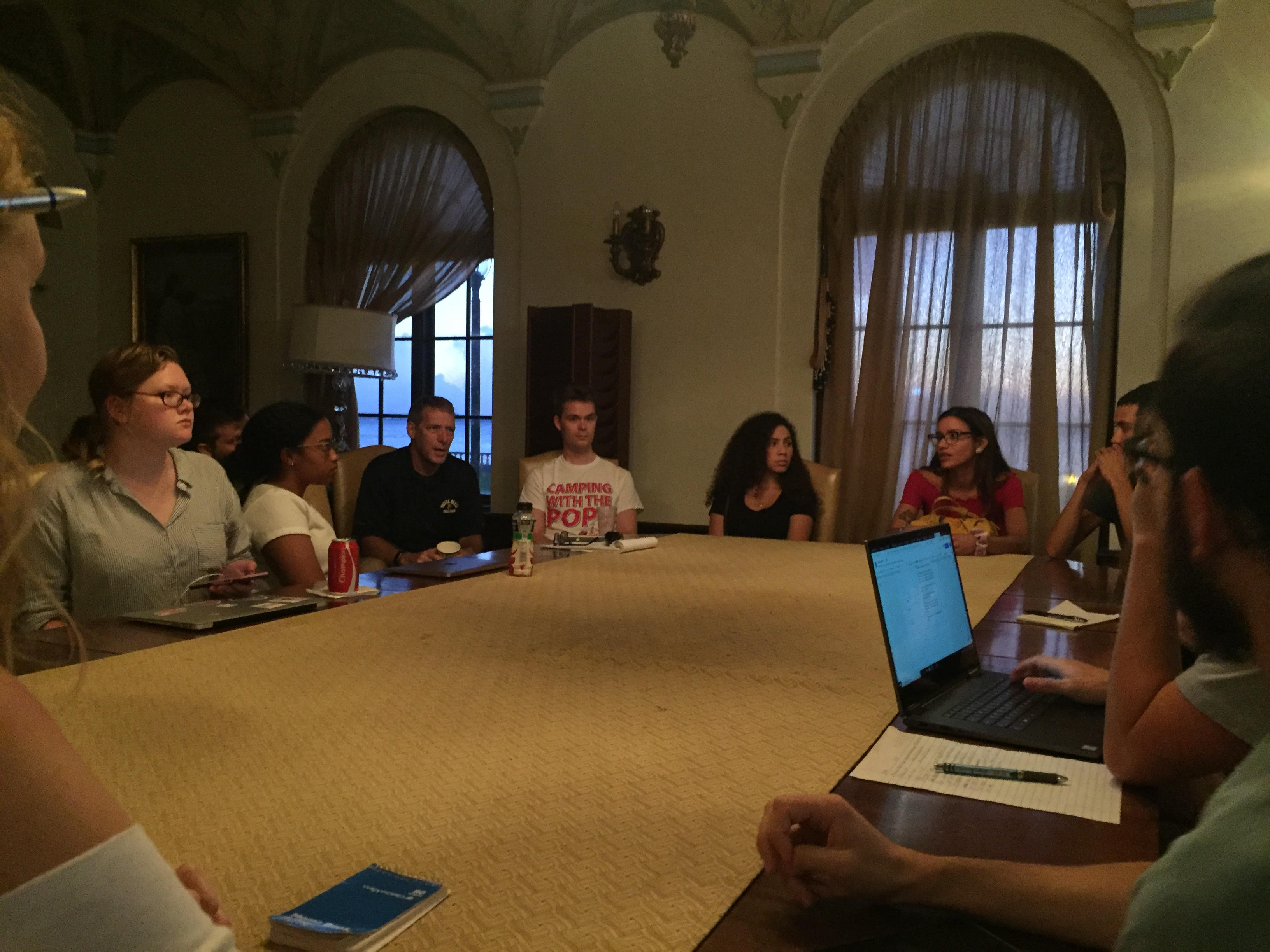 This year, New College introduced law resources available through courses, real-world experience, test preparation and networking opportunities. The emergence of the pre-law club, Novum Collegium Litigos, in combination with Constitutional Law I, an upper level seminar course, shows that the college is expanding the pathway for graduates to attend law school.

General Counsel David Fugett sponsors the Novum Collegium Litigos. “I had a sneaking suspicion that New College students might be interested in going to law school,” Fugett said. “I knew of some top-notch attorneys that had graduated from New College but there was no way to find out who was interested in a law degree. There was no organization, no professor, no staff member, no administrator, who knew how to get in touch with the students.”

Second-year Rhys Shanahan, President of the newly formed Novum Collegium Litigos, explained that the club aims to provide members with skills to participate in cases and understand the different fields of law and forms of litigation, as well as provide hands-on experience through competitions in the American Mock Trial and Moot Court competitions. In addition, Fugett is working to provide resources for the LSAT and bar exam and to create a network connecting students and alums who have experience with practicing law.

“I realized that New College is uniquely set up to be possibly the best undergraduate institution in the United States for students that want to go to law school,” Fugett said.

Fugett explained New College graduates have a combination of factors that set their applications apart. All graduates have pages of personalized and detailed narrative summaries from each professor they have worked with, as well as unique experience with at least three Independent Study Projects. Fugett emphasized that the most distinguishable factor is that all graduates have written, researched and defended a thesis.

According to Fugett, law schools are more interested in graduates who concentrate in areas they are passionate about.

Deans of Admissions from law schools like the University of Florida have contacted David Fugett, asking to meet with interested students.

“That was pretty much the opportunity I was looking for, was to meet with people like that and they’re already contacting us, we don’t even have to reach out to them,” Shanaham said.

Additionally, Shanahan and Fugett are working on getting New College approved to be a testing site for the LSAT and bar.

“The Law School Admissions Counsel has already reached out to approve New College a testing site and we have the space for it in Heiser,” Fugett said. “If you get a New College diploma, you’re going to get into law school.”

Law school does not always result in practicing law. The Constitutional Law course being taught this semester by new Professor of Political Science Michael Gorup explained that he takes a different approach when teaching the course.

“The way I approach the law is through the lens of political theory and political science and that is one of the distinctive features of how I design the constitutional law classes,” Gorup said. “It’s not focused on doctrine and the types of arguments you need to make in a courtroom but focused on analyzing the development of political institutional framework.”

For this exact reason, Gorup explained that the course is beneficial to all students, not only students focused in law.

“I felt like it will be a course interesting to students who want to go to law school and students who don’t,” Gorup said. “That’s not to say that [this course] is not useful for students interested in going to law school.”

“When you go to law school you have to take constitutional law and most likely the way you’re going to take it is as a base course general requirement, different than the way I’m teaching it, which is good honestly you don’t want to take the same course over again.”

The courses, clubs and resources pertaining to law continue to expand. According to alumni Jerald Martin Lentini, there was no foundation for a pre-law track but his time at New College was still insightful.

“New College, more than anything else, prepared me to be ignorant. There is a world of difference between someone who is ignorant and doesn’t know it, and someone who is ignorant but fully aware of that fact,” Lentini said. “A lawyer’s best asset is an awareness of her or his own ignorance, coupled with a willingness to do something about it.”