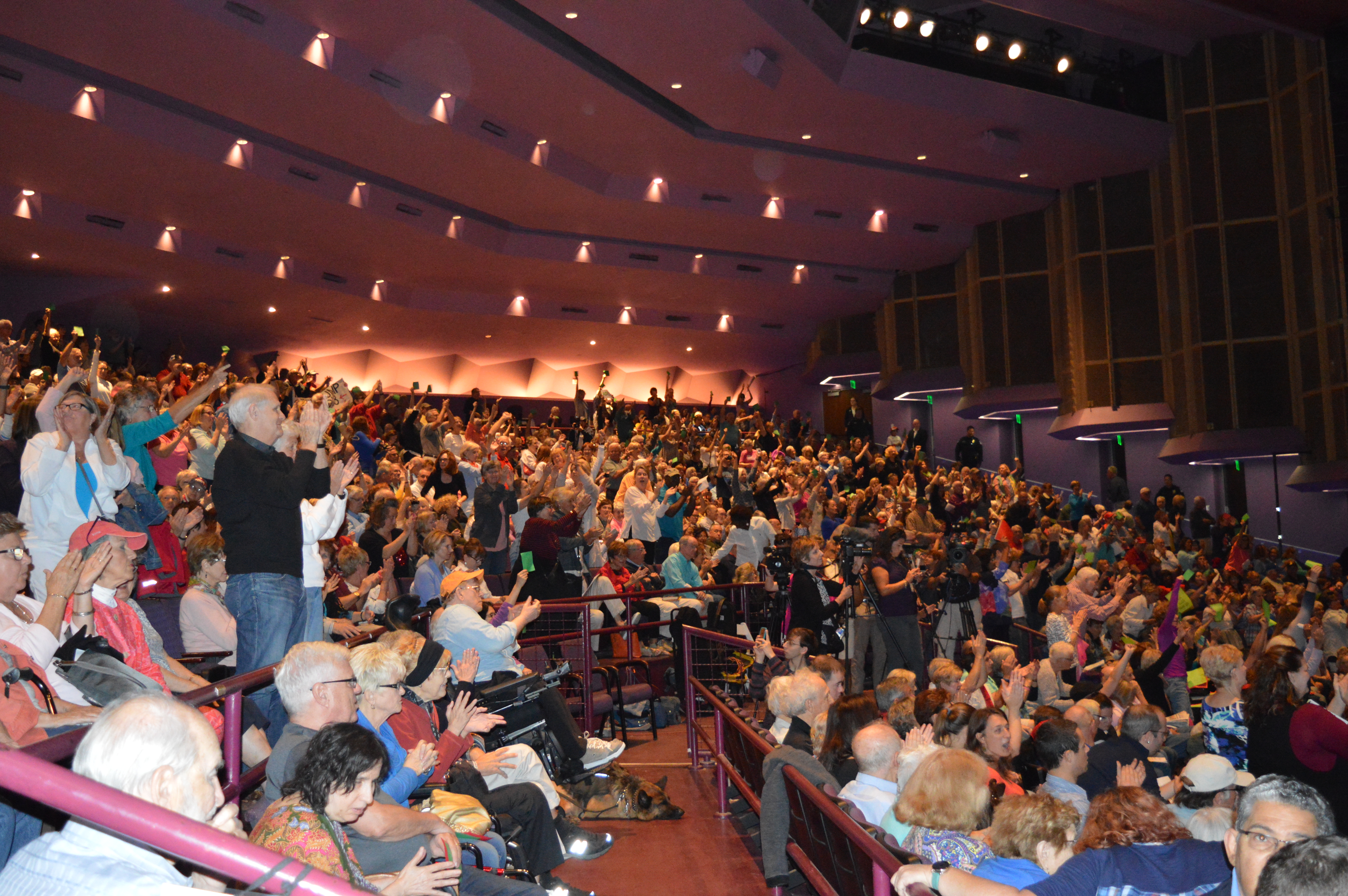 Nearly two thousand energized constituents made their way to the Van Wezel Performing Arts Hall in the early hours of March 18 to exercise a fundamental aspect of democracy – the right to voice their concerns at a town hall. Attendees eagerly lined up outside as early as 9:00 a.m. With 5,000 R.S.V.P.s, the 1,736 occupancy limit inside the Van Wezel was quickly filled and speakers were set up outside for the couple hundred who were turned away.

Buchanan’s 75th town hall event comes weeks after efforts by All of Us Sarasota, a local human rights oriented activist coalition, in which members marched into Buchanan’s Sarasota office to demand a town hall meeting.

Buchanan serves on the House Committee on Ways and Means as the Chair for the Oversight subcommittee. This committee has a wide jurisdiction over taxation and a number of other programs such as social security, medicare, unemployment benefits, Temporary Assistance for Needy Families and the federal welfare program.

Healthcare, climate change and Donald Trump’s continued refusal to release his taxes were all pressing concerns for the town hall attendees. For an hour and a half, Representative Buchanan’s constituents belabored him with pointed questions about his and President Donald Trump’s policies. Attendants shouted “Yes or no!” and “Answer the question!” while waving red cards to signify their disapproval. Despite this, Buchanan remained optimistic throughout the town hall. When one woman questioned if the town hall was as scary for him as it is for her,  Buchanan replied, “I’m enjoying it.”

“This is what democracy is all about,” Buchanan said in a private interview with the Catalyst. “Giving people the right to be heard, and me listening, primarily. That’s my goal, and looking to try to implement some of their ideas and thoughts, in terms of legislation, [into what] we’re working on in Washington.”

In the minutes leading up to 11 a.m., tension filled the air. Chants of “Healthcare for all!” erupted inside while outside the line was charged with friction, a precursor of what was to come.

Groups of Trump supporters and one lone anti-Trump protestor faced off across the road while people filed past between them waiting to get inside. Other protestors held signs supporting Planned Parenthood or the Affordable Care Act.

One group of Trump supporters waved a flag with the president’s face emblazoned on it, played “God Bless America” over a set of speakers (as well as a slew of other classic patriotic songs) and shouted things like “Spoils to the victors!” and “You lost, we won!” Like many of the president’s fans, they seemed intent on forcing opponents to accept the outcome of November 8.

The apparently lone anti-Trump protester held a sign that had “Trump Tillerson Pence Impeach Now” written on it in black and blue marker and was heard yelling “He’s a liar!” and “Where’s his tax returns?” At one point she screamed, “Anyone who’s with Trump is a fool!”

Back inside, a staff member came on stage to announce that there would be “two microphones, so as many people as possible can be heard.” Her comments were met with laughter, but quickly turned to booing when Buchanan walked on stage. Many of the first questions regarded healthcare.

Buchanan’s response was quickly drowned out in one of the loudest roars of the morning. Much of the crowd, concerned with House Republicans’ recent plan to repeal and replace the Affordable Care Act, chanted “pay your share,” for a solid 30 seconds.

Another woman in the crowd listed some of Florida’s greatest assets, “her beaches, her clean air and her clean water,” and asked whether Buchanan would join Representative Curbelo’s (R- FL) and other House Republican’s efforts to support climate change science.

Before Buchanan could respond, the crowd bellowed “Yes or no!” Although he kept his calm for most of the town hall, to this he replied, “You asked a question, I’m going to give you an answer.”

Not everyone inside was opposed to Buchanan and Trump. Although signs were technically not allowed in the venue, groups decked out in Trump merchandise were dispersed throughout the crowd and used every available opportunity to stand and wave the familiar Trump and Pence campaign signs. When one pro-Trump supporter got the opportunity to ask a question, she claimed that Republicans were not being given the microphone and that “everyone speaking is reading from a prepared text that has been given to them.”

Herds of attendees stood up and booed, expressing their dissent with the woman’s comments. Two people in the center of the hall then held up a six-foot sign that said, “Pivot from Trump or lose in 2018.”

The week of Feb. 20 was the first recess of the first congressional term under Donald Trump. At the start of the 2015 congressional term, Republican lawmakers held over 200 town hall meetings in just two months – a drastic difference compared to the mere 90 that have been scheduled for this year thus far.

Buchanan is not the only lawmaker to return home to a not-so-warm welcome. According to NPR, strong GOP backlash has been seen in town halls in “some deep red places, stretching from [New York Rep. Tom Reed’s] western New York district to Kentucky and Iowa.” Frustrated constituents have confronted their representatives over issues ranging from the Republican’s new health care bill to Trump’s taxes and his involvement with Russia. This was no different in Sarasota despite Trump having won the county in a comfortable margin.

When one man asked Buchanan if anything the president said or did embarrassed him, Buchanan conceded that he doesn’t agree with everything Trump says or does, but believes it’s “about the people,” not about Trump.

“You have to give somebody, Barack Obama or this President, a period of time, whatever that is […] It’s not that you can’t weigh in on things, but [you have to] see what he can do,” Buchanan said.

Information from this article was gathered from thinkprogress.org.