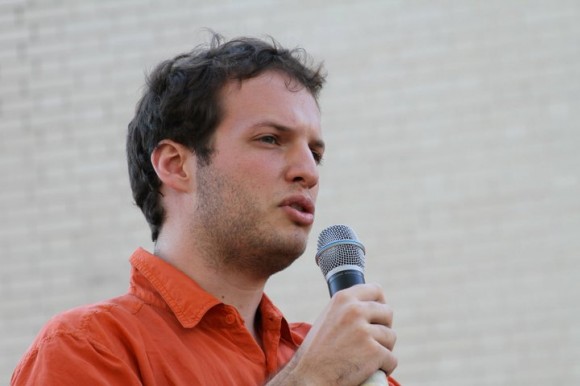 Decal Spoke on the issue of guest pass policy at the Oct. 6 Towne Meeting.

The campaign period for New College’s late fall elections was short this year: only seven days. Students will vote today on which of the candidates should lead the New College Student Alliance (NCSA) in 2011. TheCatalyst interviewed each of them in order to provide a fuller account of their platforms and views than may have been available on campaign posters or at the Midnite Debates.

Glaude asked Crispen to be his running-mate after the Towne Meeting of Oct. 20. Glaude, who has served as Fitness Center Representative for one year and started the New College basketball team, said that he’s “always thought about running.” Crispen pointed out that he and Glaude are “new, fresh  candidates; we’re new to the political scene here.”

As far as a platform is concerned, Glaude stated, “One thing that we both feel strongly about is helping with the academic program here. I feel like it would be really easy for us to coordinate with the administration [on] a better way of preparing students — all students, from your first year up until you graduate — for grad school.” He and Crispen agreed that this would mean such measures as preparing students more for creating Independent Study Projects and theses, and offering each one a free crack at the Graduate Record Examination.

They proposed the creation of an “Academic Club” especially for informing new students, but said also that they realize the Writing Resource Center is already addressing this issue to some extent, for instance through the help they are offering with resume writing.

The pair’s other primary stance is to raise the profile of the New College Zeitgeist, a Google Moderator account the NCSA set up to facilitate communication between them and the student body. Glaude said that he and Crispen would try to “really make students excited to use [the Zeitgeist], because it’s really their way of helping influence” political matters here at NCF.

Peckham and Long have worked together on both the Council on Student Affairs (CSA) and the Student Allocations Committee (SAC), which Peckham currently chairs, for most of this semester. As many readers know, Peckham’s involvement in campus politics goes back much further than that, including service on the Election Codes Review and Constitutional Review Committees, and the positions of Green Affairs Representative and Transit Coordinator.

Long has established a prodigious reputation for himself during his short time at New College, sitting on the Community Board and the Constitutional Review Committee and attending all Council on Green Affairs meetings, in addition to the positions mentioned above. He has also been an active volunteer during his youth here in Sarasota.

Both candidates said they had a presidential bid on their minds, and were impressed by the other’s drive, so Peckham approached Long when he learned that the latter may not spend the spring semester participating in Professor of Political Science and incumbent state legislator Keith Fitzgerald’s Capitol Semester program.

The two of them have a slew of proposals they wish to bring to the NCSA. “Faster internet,”  tackling the Wall times issue, “revitalizing the Four Winds,” adding a solar heater to the pool, extending life guard hours on the weekend, “sav[ing] the fitness center,” getting new furniture for Ham Center in a “matching campaign with the Foundation,” and “adding a tree house in one of the banyan trees” are all matters they have already been either involved in or are looking into, and intend to pursue as Co-presidents.

Much of their interview concerned the NCSA’s $280,000 current reserve fund. As Peckham explained, the sheer bulk of this accumulated budget surplus either means, “We’re not doing enough for students, or they’re paying us too much money.”

“People, especially within the NCSA, expect proactive stuff to come from either the students directly, or from the administration” Peckham continued. He went on to explain that the cabinet needs to be more active in proposing improvements to the campus and to student life.

Miller approached Ackerman because she “knew she was involved in the CSA and the ACLU, and [she’d] taken several classes with her and knew she was pretty solid.” Ackerman is co-founder and President of the New College American Civil Liberties Union, and Miller has been Student Court Prosecutor for one year and a Residential Advisor for two. She, like Peckham and Long, has also served on the Constitutional Review Committee.

Miller’s and Ackerman’s platform is extensive and available on Facebook as a “doc” on the group page “Crystal + Hannah NCSA Co-Presidents IN IT TO WIN IT & DO IT TO IT.” They ask that students vote for them today because, as Miller put it, “Having a kind of well-rounded position on a lot of different aspects of a student here’s life is important.” Ackerman added, “I think people have come to know us in a lot of different contexts. I’d like to think that would make them also maybe trust us a little more.”

Their proposals include the creation of a single comprehensive NCSA website, holding weekly open “courts” at the front of Hamilton Center, addressing Room Draw and fee assessment issues, improving relations both between students and the administration, and between older and younger students, and attempting to find a compromise in the Wall times debate that will allow Walls to run past 2 a.m.

In defense of their combined lack of experience compared to Peckham and Long, Miller argued, “People are here about four years and nobody can have more knowledge than that, and . . . everybody who has not been President before, it’s going to be a new experience for them.”

Decal, the current moderator of the student forum, is the only candidate running alone this year. He stated that he threw his cap into the ring “because of a long dissatisfaction with the way the school is run.” “I had been talking about my vision of New College for quite a while,” he said, “and then I got word of the candidates, and I was unsatisfied with all of them.”

Decal would change the NCSA more than any other candidate, he explained, by getting rid “of most of the legislation that codifies every aspect of student life.”  As he put it, “There’s no reason why we need 30 positions to govern 850 people.”

Decal also wants Walls to become much less formalized, and other responsibilities he claims have been “bestowed on Student Affairs” to be returned to the students themselves. “Wall sign-ups were people just requesting the [Equipment Technical Assistants] EQTAs for a Wall, and they would pick which ones they thought were the coolest ideas,” Decal explained, and went on to say that what put an end to this situation was that “we run to the administration for every single problem we have.”

Decal is arguably the least experienced in the NCSA of all the candidates other than Crispen. In reference to this fact, he stated, “I have been involved in this school in a less formal way. There are other ways of improving the community and everyone’s experience than going to cabinet meetings.”

All of the candidates but Decal emphasized that they would not attempt to lobby for any specific student’s inclusion in the cabinet. Glaude stated, “The student body will know which of their peers would be qualified more than I would.”

Long predicted, “we’re going to be very very big on the application process.” He explained, “we want a diverse cabinet. We want people with different ideas, different perspectives.” Peckham added that they want to try and bring “campus leaders like TM [Mawn], Chelsea [Dye], Jeremy Blackowiak” in as Temporary Advisors to the President “to give us the tenured opinion; what we need to be looking for.”

Miller and Ackerman also said that they would employ the Temporary Advisor to the President positions that were instituted last year, when newly elected Co-presidents Matt Broerman and Chelsea Dye were reviewing applications for their cabinet.