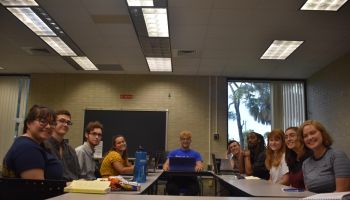 While considering the future of New College may feel a bit impossible in this current, chaotic moment, New College Student Alliance (NCSA) presidential candidates Sofia Lombardi, Izaya Garrett Miles and Rhys Shanahan have set their sights—regarding campus improvement, internal and external relations and student needs—significantly ahead. Although this year’s spring election has been postponed indefinitely due the spread of COVID-19 and the subsequent actions taken by administration to ensure students’ safety, Lombardi, Miles and Shanahan will be picking up their campaigning efforts as soon as the race eventually resumes. Take some time to learn a bit more about the upcoming candidates, their policies and their plans to make New College a better place for all members of the campus community.

First year and Catalyst staff writer Sofia Lombardi believes that a great deal of her strength as a candidate lies in her prior political experience. Lombardi has worked on four political campaigns since high school, during which she served as Vice President of her school’s Model UN club and participated in a variety of extracurricular student leadership activities. She marks her February trip to Tallahassee to protest HB 7087, the bill that intended to merge New College with the University of Florida, as a major turning point for her own personal political career.

“Organizing the trip to Tallahassee really helped me to see how much of an impact student activism can have on issues that matter, and I want to be in a position that can motivate others to do the same,” Lombardi said. “It showed me that I could be a leader at New College and that this would be a great time for me to step up. I feel that getting involved in political structures is one of the best ways to enact positive change.”

Along with increasing NCSA transparency, Lombardi emphasized her dedication to providing students with the best opportunities possible, stating that if elected, she would prioritize funneling more money into student research grants and services and would work to improve communication between students and administration.

“I want to prioritize the continuation of student activities and student life, amidst budget cuts, because despite serious limitations with the budget, I think we can make things work if we just look at it from a different perspective,” Lombardi stated. “But above all I really just want to work with the administration to work for the betterment of students. I think ensuring we have a more accessible platform to voice those concerns is very important.”

Catalyst staff writer, Student Allocations Committee (SAC) Secretary and second year Political Science and Economics AOC Izaya Garrett Miles is most concerned with cultivating a better campus climate overall, a task he feels he could succeed in during the academic year ahead.

“I believe that I can take a very nuanced look on the myriad issues that the NCSA has an influence on, and come up with novel compromises for difficult situations,” Miles stated.

Miles’ campaign is made up of two major components, which he calls “common sense” and “bottom-up community building.”

“I think our issues can broadly be defined into two categories: the kind where a level-headed leader can come in and take everyone to a resolution where they’re all a little happier through unilateral action, and the kind where students need to come together organically, with some NCSA facilitation,” Miles said.

If elected, Miles would like to work with administration to designate more areas around campus for students to collaborate within, whether it be for club-related activities or simply for fostering meaningful student-to-student connections. Miles also has a plan for bettering student-police relations, which have notably been strained within the past couple of years through the implementation of body cameras.

“We’ve had a lot of tension with police on this campus, and I think the accountability given by body cameras can go a long way to relieve that,” Miles said. “This, I understand, won’t happen immediately, but from day one I’m going to start fighting for it.”

Second year Political Science AOC Rhys Shanahan has big plans for tackling high priority issues at New College, something he feels qualified for based on his prior experience establishing his own organization, New Charity of Florida.

“It’s a charity that a friend of mine from high school and I started together,” Shanahan said. “It’s mission is to help promote student learning outside of the classroom, that doesn’t mean we don’t do anything inside the classroom too, but the whole charity is focused around funding student programs that help students learn new skills to help them out later in life.”

Shanahan, who is also the founder of New College’s Law Society and a member of the SAC, has three primary presidential platforms.

“I’ve designated them as internal improvements, external relations and NCSA transparency and accountability,” Shanahan stated. “For internal improvements, we know campus climate is an issue, we know student-administration relations are shaky, especially considering last year’s Joy Hamm situation and this year’s police situation. There’s a lot of things that can be worked on internally that I want to focus on primarily if I’m elected president.”

As far as external relations go, Shanahan would like to focus on reaching out to local high schools, promoting New College within Sarasota and surrounding communities.

“I think more students in Florida should be coming to New College, as it is a Florida-based university, and no one in my home county knew of it,” he explained. “I’m one of maybe four kids who came here from Hillsborough county in my class.”

While the concept of NCSA transparency is fairly self-explanatory, Shanahan believes that improving the visibility of the NCSA, along with the varied efforts of NCSA members, would vastly improve students’ relationships with their own campus leaders.

“I try to stay informed on what’s going on on campus, but I hear more from student clubs on campus than I do from the NCSA,” Shanahan said. “I think the NCSA should be a little more active in getting the projects they’re doing known, hosting more events, and taking accountability for everything that happens on campus as representatives of the student body. I want to take that responsibility.”