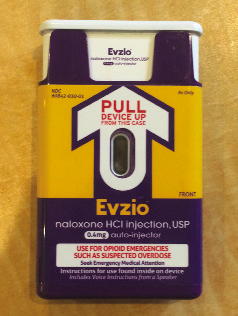 The rise in drug-related deaths in the United States has become a public health crisis as deadly and widespread as the H.I.V. epidemic of the 1980s and 1990s. An estimated 125 people a day die from a drug overdose in the United States, 78 of those from heroin or prescription pills, according to numbers published in the New York Times.

The New College Police Department (NCPD) has been equipped with Evzio, a single-use naloxone auto-injector that can reverse an overdose almost immediately, since December 2015. Naloxone is an opioid antagonist that can reverse the symptoms of an opioid overdose within minutes. It works by blocking opioid receptors in the brain, reversing the depression of the central nervous and respiratory systems caused by opiates. Harm reduction, a public health policy that deals with reducing the harms caused by drug use, encourages accessibility to opioid antagonists such as Naloxone.

“Every officer carries two of these [Evizo auto-injectors],” Chief Michael Kessie said, head of the New College and University of South Florida (USF) Campus Police Department. “It’s $495 a pair, it comes with a trainer – which is a fake one to train with – and then two of these for $495. So it’s almost $250 a dose.”

The NCPD received its Naloxone for free through a grant from the Kaléo Pharmaceutical Company – the same grant that provided Sarasota County Police Department with their Naloxone supply last December.

“There are no other departments that carry this in the area except for us and Sarasota [County Police Department]. We were one of the first colleges in the state to carry it. We were ahead of a lot of other places in the state.”

Kaléo Pharmaceuticals devised its “Kaléo Grants Program” to provide their product, “the Evzio (naloxone HCl injection) Auto-injector, at no cost to certain qualifying non-profit organizations and other groups demonstrating need,” according to the Kaléo Pharmaceutical Company website. “The Product Donation Grants Program is intended for first responder organizations for use in the field or for qualifying non-profits, harm reduction groups and health departments who intend to distribute product to patients facing financial hardships who do not have insurance coverage for prescription medicines.”

The company has a patent on the auto-injector delivery system – which allows first responders to more easily and quickly react to overdose situations.

“The nasal method [of administering Naloxone] is cheaper, but I just don’t think we should always be looking for cheaper,” Chief Kessie said. “The nasal method requires that an officer put on gloves – which he or she should also do with the Naloxone – and then actually administer this liquid into each nostril. To me I think we’re asking our officers to almost perform a medical procedure – they’re not doctors.”

To administer Naloxone via the Evizo Auto-injector you simply remove the red piece from the injector and push down on the individual’s leg. The Evizo administration system speaks out loud to the first responder, providing simple to understand instructions as soon as the case is removed. The injector will tear through the individual’s clothes, but it is preferable to remove or the tear the garment covering the injection site – Kessie compared the process to administering an EpiPen dose to an individual suffering from anaphylactic shock.

“We went to the SSDP Southeast Regional Conference in Charleston two years ago and we got trained [in Naloxone use] by the North Carolina harm reduction coalition and they went around and taught us to administer it with an orange,” Students for Sensible Drug Policy (SSDP) member and thesis student Mariana Bonilla said.

“They were like ‘Look, it’s this simple,” fellow SSDP member and third-year Hannah Procell added. “So they trained us on the proper administration, which is like recognizing the signs of an overdose and then checking for responsiveness in the person who is unresponsive and possibly overdosing, trying to wake them up if they are unresponsive and then call the authorities. Call 911.”

“They showed us how to inject it [single-dose Naloxone liquid which] with a needle and they showed us the self-injector,” Bonilla said. “The cheapest method is just having syringes and having the bottle of Naloxone. They told us thigh, arm, butt – anywhere with muscle as it’s intramuscularly available. It’s completely benign, so if you give it to someone who is not having an overdose nothing will happen to them. When you give someone Naloxone, it basically puts them into immediate withdrawal. They may vomit, they may be incredibly angry and frustrated at you, but you’re saving their life. Never question if you should use it.”

Heroin and prescription opiate use has increased dramatically in the U.S. over the past decade. Between 2006 and 2013, a study by the Substance Abuse and Mental Health Services Administration (SAMHSA) revealed that the number of first-time heroin users had doubled from 90,000 to 169,000.

“When we had the deaths on campus [in May 2015], everybody was asking ‘Why don’t we have this?’” Chief Kessie said. “Well, at that time it wasn’t legal, it was illegal until July 1 [of 2015]. So what we did was we started looking at getting it, we were working with the sheriff’s department and they said that they found this grant and I applied and we got it. In December we started training everyone, by Dec. 31 everybody had it.”

Naloxone must be administered during the onset of an overdose; it is not effective in reversing the effects after they have damaged the body.

“This [Naloxone] wouldn’t have saved those two young men because of time, there was too much time, too many hours had passed,” Chief Kessie said.

The recent resurgence in the use of heroin has been coupled with an increase in the abuse of prescription and synthetic opiates such as Fentanyl and its derivatives – some of the most potent commercially used opiates. Between 2005 and 2007, more than 1,000 U.S. deaths were caused by fentanyl-heroin overdoses, according to the Drug Enforcement Administration. Seizures of drugs containing the painkiller jumped from 942 to 3,334 between 2013 and 2014. Carfentanyl – a fentanyl derivative that is 10,000 times more powerful than morphine – overdoses can require upwards of a dozen doses of Naloxone to reverse the effects.

“I think that every community should have access to Naloxone. Specifically for New College, it’s extremely important because of the very dangerous opiate fentanyl that is very present in the heroin supply in Sarasota,” Procell said.

“Each officer carries two Naloxone doses now. We started hearing from Sarasota [County Police Department] that they would have numerous deputies show up [to an overdose situation] carrying two of these each, and they’re having to use five, six, seven of these on a person. The heroin and fentanyl and all these other things people are taking are so strong now that one of these [Evizo Auto-injector] is no longer a lot. So if somebody’s out and it’s an overdose – this isn’t going to hurt them if it isn’t – you give them one you wait three minutes, and, if you don’t get a response, you give them another. For me if I’m alone here, if I have to use my two I’m done – at least until the EMS gets there. So we’re hoping that we have another officer there so we would have up to four doses.”

At a cost of $250 a dose, the use of multiple Naloxone doses on a single overdose can quickly escalate into the thousands.

“For the students I feel comfortable that our officers are trained and they have this and I think it’s just really a good tool,” Kessie said. “The only thing that is an issue with the Naloxone is it’s cost, but it’s really a non-issue in the sense that we’ve decided to already move forward with this. The worst-case scenario is we may have to go to the other nasal method, but I’m going to try to resist that if I can. I think we should find the money for this. I think we need something quick, easy and foolproof – and I feel more confident with this. The cost is a little bit high, but to me ‘how do you put a price on human life?’ So I think we are going to try to stick with this.”

Naloxone is currently available via injectable or inhalable liquid, under the brand names Evizo and Narcan, respectively. CVS currently has both brands available, although the cost of the Naloxone Auto-injector Evizo is substantially more expensive at CVS (reaching up to $1,000). Naloxone does not require a prescription and can be obtained by anyone after receiving a brief counseling session on how to use it.

“You can get them [Naloxone] from people in Florida who are harm reduction coalitions and are trying to start up needle exchange programs and all these sort of harm reduction things in Florida,” Bonilla said. “If someone seriously wants to have it on them it is very do-able.”

“There are some organizations online where you can sign up with your family, if you as a family member can [obtain it],” Procell added. “If someone in your family is abusing opiates you can obtain Naloxone, so I personally, as a representative of SSDP, would recommend preventative measures for people who are opiate abusers, because lives can be saved instead of ended with preventative harm reduction.”

“To be prepared if you do have someone who is addicted to opiates, to have it in their home – for parents I think it is a fantastic tool,” Kessie said. “When you’re using heroin, we’re beyond the marijuana, the having a joint or a beer underage – this is serious business. Being a parent myself and a grandparent, I think all the time about the students – sometimes I know they don’t think we’re concerned about them – I tell everybody I lay in bed at night and toss and turn about ‘Am I going to get a phone call?’ ‘How’s the wall tonight?’”

Drug and alcohol abuse on college campuses can often be overlooked as a normative behavior, the effects of which will not follow students once they leave ‘the bubble’ and enter the ‘real world,’ a view that can minimize the real risks of drug use and the importance of harm reduction methods.

“For New College, we know there is a potential for high risk behavior and drinking in your age group. We know that there are decisions that are not always the best, but we just don’t want people to think of this as the ultimate safety net. I think this [Naloxone] is a great tool for us. I think it shows that we are concerned. The administration is concerned. I just want to make sure that the students know the best safety net is the other students.”

Drug abuse is often symptomatic of underlying emotional, physical or psychological issues that should be dealt with in addition to – in place of – punitive action. The use of rehabilitation methods in accordance with punishment has proven to be more successful than implementing retributive measures alone when looking at rates of reincarceration and re-assimilation into society of individuals who have been incarcerated for nonviolent, drug-related crimes.

“Let’s forget drugs for a moment – I know cops are always preaching about drugs – let’s just say an emotional or mental issue. Students here are very high achieving, with that tends to come some other issues. Everybody wants to be 100% – you’re all like wired that way – sometimes the stress just becomes really too much. Maybe talk to an RA or a professional staff member or the dean – you can remain anonymous – just talk to someone. That will probably go a lot farther than this [Naloxone] will – maybe we’ve waited too long once we’ve started using this. We’re so small here at New College, we have to look out for each other.”

Information gathered from kaleopharma.com, samhsa.gov and the New York Times