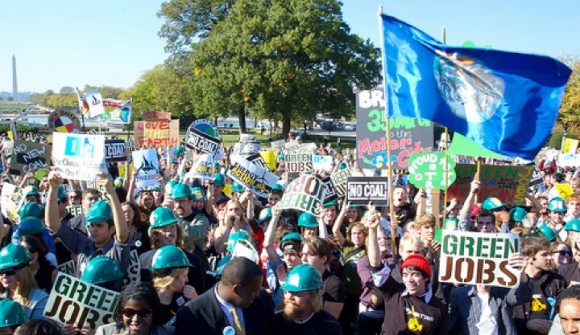 For three days, 10,000 young activists in Washington, D.C. learned about big-time polluting companies and the ways the government funds them. On the fourth day, they confronted the government. Powershift 2011, a conference about clean energy, culminated on April 18 with a march to Capitol Hill and meetings with state representatives, giving these activists a chance to bring their message to their elected officials.

Lobbying was only aspect of Powershift, which was first held in 2007. Activists staged several protests, marches, street theaters and demonstrations throughout the conference. “We were really yelling at BP and the Chamber of Commerce and Obama and the House of Representatives and the Senate, all with kind of different issues … unified with an idea of the government not supporting dirty energy,” first-year and Council of Green Affairs (CGA) representative Nicholas “Niko” Segal-Wright said. Segal-Wright attended Powershift along with third-year and CGA Vice President Johannah Birney and second-years Rebecca “Becca” Holmes and Gardening Tutorial Teacher’s Assistant (TA) Audra Locicero, who are also involved with the CGA.

Powershift 2011 began on April 15 and was held at the Walter E. Washington Convention Center in D.C. “I think first and foremost, [Powershift] is a movement-building training session,” Locicero said. “Getting people educated on how to get other people involved in the movement. They said [Powershift 2011] is the largest grassroots movement-building training ever.”  The conference involved multiple workshops, discussions and a job fair. Locicero and Segal-Wright both said the workshops were diverse, but introductory-level. Workshop topics included the BP oil spill, feminism in a green economy, agri-businesses and ways to transition university campuses to clean energy.

Outside of the convention center, marches and protests went on throughout the conference. “When you get 10,000 young, interested, active people together, madness is gonna happen,” Locicero said.

“One day there was a protest outside the [International Monetary Fund (IMF)] to say ‘Don’t fund things like mountaintop removal,’” Holmes said. “And one morning a bunch of people went and protested at a BP station long enough that they had to actually go and shut down the BP station, they couldn’t run it for the day.”

Birney, Holmes, Locicero and Segal-Wright had to leave before lobbying began, but did attend the marches that day. Holmes said one group “went around a tour of of Big Polluters, as they called it. They walked from Lafayette Square to the Chamber of Commerce and then to BP headquarters and the IMF … After that march ended, a group called Reclaim Power took over and they ended up occupying the Department of the Interior for a while, for like 5 hours, then I think a few people got arrested and they were all released that night. There was some really intense noise made about that.”

The four NCF students bussed up to D.C. for the convention with students from Florida Gulf Coast University (FGCU) and met other Florida university students at Powershift. “I think the best product that came out of [Powershift] was the networking opportunity for the activists themselves to go back and localize their efforts,” Holmes said. “We inquired a lot about getting solar panels on your school because we know that’s something that’s being tabled for use of the Green Fee, so we were asking people how that worked and what they thought about it at their schools and how they thought it was best to implement these ideas.”

Locicero said students from FGCU told her their college received $118,000 to put a food forest on their campus, leading to a discussion about “maybe making a Florida Student Gardeners Alliance. I feel like that could turn into something cool.”

Segal-Wright also got many ideas from other activists on ways to improve energy at New College. “There was a big group of people that bussed themselves up here on a veggie powered bus — I wanna do that,” he said with a smile. “I want to get our van converted to a veggie-powered van, that was one idea that got me really excited.”

Keynote speakers at the conference included Al Gore and Van Jones, the founder of Green For All, which advocates for a clean energy economy. According to Holmes, “President Obama surprised a few of the members of Powershift by meeting them, and they got to talk to him for like 20 minutes. Evidently, he was kind of upset with them because they were openly critical of his policies.”

Locicero said one major theme of the conference was that these are global issues. “To me, the most salient thing about the movement is that this affects everyone equally, even if people don’t want to realize it. It’s our environment, you know?”