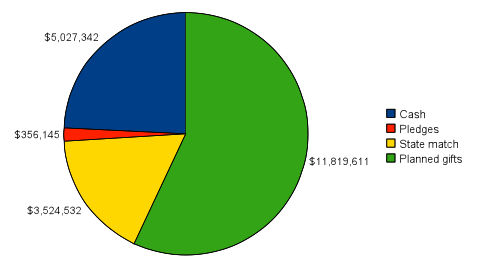 Prior to the $3 million gift attained just this past month, the New College Foundation had raised $17.7 million, but with the addition of the hefty endowment and several smaller funds, the campaign has just reached the $21 million mark. Stover claimed that if they keep up this pace, the Foundation will be well over its target funds within the planned seven-year time frame.

Though the country’s economy has generated a toxic environment in which to launch a fundraising campaign, the Foundation has remained optimistic and has continued to succeed in obtaining donations.  Stover attributed the efficacy of the campaign in part to the multiple donation plans available.

Roughly half of the gifts accounted for are “planned” or “deferred” gifts, meaning the Foundation will only receive the money after the death of the donor — as was the case with the $3 million gift.

“Anytime you do fundraising, you have to have a lot of different ways to tap your audience,” Stover explained. “If [donors] just had to give us real hard cash today, our numbers would be a lot less.”

State legislature owes approximately $3.5 million to New College in “matching” gifts — money allocated by government-funded programs that match a certain percentage of donations made to New College. The state cut out the programs at the end of last year, which gave the campaign members an incentive to raise as much money as possible before the government funds were cancelled.

“We had a little push around that time and got about four six-figure gifts over a two-week period, just by putting it out there [that] state matching was going away [and] we need people to step up,” Stover accounted.

The state has a backlog in matching gifts but New College is in the queue for payment and will eventually be granted the funds.

Another strategy the Foundation has implemented is a naming platform in which donors can, for a specified amount of money, name various New College buildings, labs and classrooms.  Significant donors have already chipped in to name the Academic Center café, the Scientific Computing Laboratory and the Academic Plaza for $150,000, $600,000 and $1 million, respectively.

“That new Academic Center is still waiting for a $5 million name,” Stover said. “That would be the largest gift in New College history.”

As budget cuts grow more frequent, New College will have to rely less on the state government and more on private funding. The future New College President, who will be determined by the end of the year, will have to find a way to meet these demands. Fundraising was a great topic of concern among students and faculty in the open discussions with the four candidates vying for the presidential seat.

“[Fundraising] has got to be in their skill set,” Stover asserted. ”There’s an element of development and resource generation that is expected in that position.

“All the candidates are very interested in how we’re doing … and they all know that they’re coming into a campaign kind of at the early stages,” he continued. “So there will be an expectation from the President to help us with some of the out-the-door fundraising as part of their responsibility.”

Though the President will need to bring in revenue by developing relationships outside of New College, Stover still expects to see the new head of faculty give a little out of his or her own pocket.

“A president can’t come in, in the middle of a campaign and not be expected to give personally to the campaign,” he said with a smile.

The Foundation wished to stress that this fundraising sprint is an “all-inclusive” push that benefits everyone. Current students, parents, recent graduates or anyone else can always make a donation no matter how big or small.

“I would encourage every graduate of New College to start giving as soon as you can … to ensure New College is here for the future,” Stover said. “There [are] lots of clever ways that you can come up with some cash and give back to the school.”