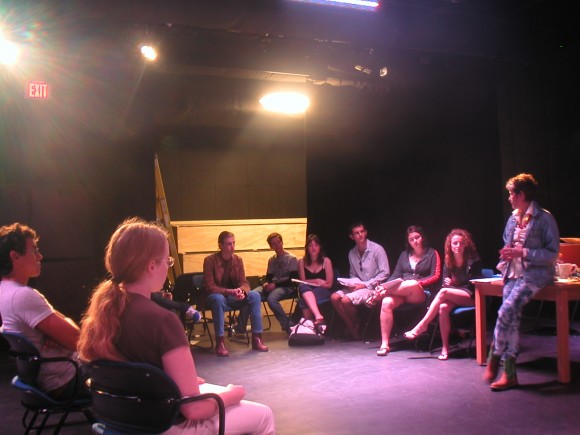 Professor Margaret Eginton leads an acting class in the black box theater on Wednesdays, after teaching movement and dance-related courses at the FSU/Asolo Conservatory for Actor Training.

No matter where one stands on the New College campus, the Florida State University (FSU) Center for the Performing Arts is always nearby. The formidable structure houses the Asolo Repertory Theater, the Sarasota Ballet and the FSU/Asolo Conservatory for Actor Training, all literally next-door to New College. Despite their physical proximity, however, the two institutions share ties that are tenuous, at best –– and from a closer angle, appear to be virtually nonexistent.

Thesis student Aaron Amram interned at the FSU Center for the Performing Arts last summer, working as an assistant stagehand with a visiting company. As a New College student intensely interested in theater, Amram has experienced first-hand what he calls “the continually not very real relationship between the Asolo and New College.”

“I often didn’t feel like me being a New College student brought anything to the situation; nor when most people saw me did they even think of me as a New College student more than just as a person from the community …” Amram said. Amram has taken a number of courses at NCF with the two faculty who offer instruction in acting and directing: Margaret Eginton and Andrei Malaev-Babel. Before they began working at New College, however, both held ­­teaching positions at the FSU/Asolo Conservatory for Actor Training.

Eginton and Malaev-Babel continue to divide their time between New College and the Conservatory. Amram said that, from his close work with both professors, he felt “that these two social or political worlds might have some intersection. But as of right now there isn’t much of a connection.

“I’ve been in situations where I’ve had to go to either of their offices at the Asolo, but I didn’t learn a whole lot as a result. It’s nice to see the facility. It’s significantly more maze-like than one should expect. … It was nice to learn all the angles and where all the stairways were. … I really enjoyed that, in fact,” Amram remarked.

Eginton is the Head of Movement and Dance at the FSU/Asolo Conservatory. At New College, she teaches Acting I and II during the fall and spring semesters respectively, but has sponsored Independent Study Projects for Novocollegians who are interested in movement and dance as well.

“I think the biggest difference is not so much the disciplines, because I don’t really draw a line between movement for actors and acting for actors. After all, when you go to the theater you’re listening to people’s voices and watching their bodies … and you have to use many of the same techniques to be truthful with movement as you do to be truthful with words,” Eginton said of her work between the two institutions.

Eginton agreed that, aside from the faculty connection, New College and the Conservatory have never interacted. “I think that it’s important to recognize that the FSU/Asolo Conservatory is a conservatory. And it’s a graduate-level conservatory whose mission is to train people for professional theater,” Eginton stated.

Eginton described her work at the Conservatory as significantly different from her work at New College: “A person goes to conservatory, I think, in order to learn established skills that will help them become employed in an existing market. A person comes to a place like New College and takes acting classes or movement or voice classes to explore their artistic potential, to create something of their own. … In a liberal arts environment, to me the job is to help the students find their own voice, their own creative voice, and to give them enough skills that they’re able to express that voice. In a conservatory environment, the primary job is to give them skills, and some creative training so that their professional skills shine in a field of many, many actors.”

From a student’s perspective, resources for the pursuit of theater at New College have always been meager, and the chance to collaborate with a nearby performance institution would seem like a dream come true. While New College’s art department has worked with students and staff at the Ringling School of Art and Design on exhibitions and other visible projects, New College and the FSU/Asolo Conservatory remain at arms’ length.

“New College has only barely begun to have a performing arts program … The impression I get is that, I don’t think the people who run the Asolo are particularly interested,” Amram said. “And because it is a heavily-endowed, busy place, I don’t really know what it would take to start building an actual communication, much less an actual exchange of ideas, resources, materials, work, etcetera. … I think that definitely the people at the Asolo have been given no reason to believe that New College can offer anything as of right now. … It’s possible that as a result of this black box [theater], some things will change. And it’s just started, so there’s really no telling.”

Eginton said that, although her students at the Conservatory have very little free time to collaborate with students from another institution, some potential to interface does exist. Conservatory students put on a series of shows called “Late Nights” that are acted, directed and produced entirely by the students. They do not charge for admission.

“I think the more that New College students went to the Late Nights, which are free, and to conservatory productions, and met the graduate students in that way, the more likely collaborations will arise,” Eginton said. She also suggested that New College could host acting or theater workshops and open them up to the community ­­–– Conservatory students included.

“Theater is really — some people say — the liberal art, because it involves the visual arts, music, history, literature, sociology, everything,” Eginton said.