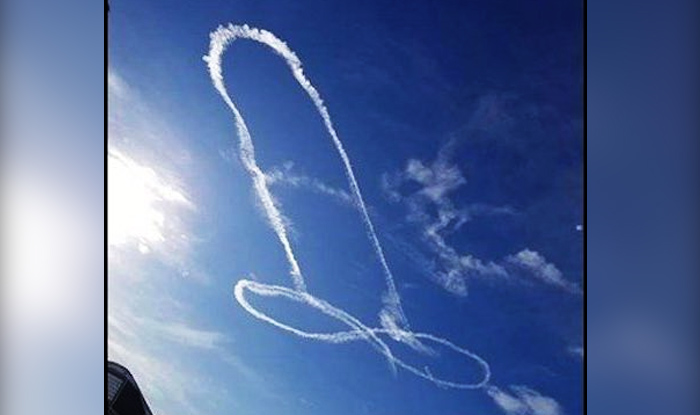 A United States Navy pilot demonstrated a sense of humor on par with the wittiest of middle schoolers when he used jet exhaust to draw male genitalia in the sky high above Washington state. On Nov. 16, residents of the Okanogan Highlands were treated to an anatomy lesson that many internet users found humorous, but Navy leadership is clamping down on such childish behavior as part of a wider effort to combat sexual harassment.

The offending sailor was piloting an EA-18G Growler jet, but most of the growling was done by Navy Vice Adm. Mike Shoemaker in the aftermath of the incident.

“The American people rightfully expect that those who wear the Wings of Gold exhibit a level of maturity commensurate with the missions and aircraft with which they’ve been entrusted. Naval aviation continually strives to foster an environment of dignity and respect,” Shoemaker said in a statement released by the Navy. “Sophomoric and immature antics of a sexual nature have no place in Naval aviation today.”

Shoemaker is part of a full investigation tasked with identifying those responsible for the aerial graffiti, photos of which were widely shared on social media. Navy leadership has not yet publicly identified the aircrew responsible. Sexual harassment in the military has received major attention from the media and the public in recent years, with the Defense Department placing heightened emphasis on prosecuting such cases.

A Navy Department conduct manual released earlier this year stated that sexual harassment can consist of “a wide range of behaviors, from verbal comments to physical acts, and can be subtle or overt.”

Even the Blue Angels, the Navy’s famed stunt and demonstration squadron, have been found guilty of similar behavior. In an investigation released in 2014, the Blue Angels were condoned for painting a giant penis on the roof of a trailer at a training facility in El Centro, California. The painting, done in the Angels’ colors blue and gold, was visible from planes and in satellite images available on Google Maps. Commanding officer of the Blue Angels, Navy Capt. Gregory McWherter, was subsequently reprimanded for doing nothing about a wide range of unacceptable behavior in the squadron, including sexual harassment, dissemination of pornography and homophobia.

If the recent incident involving the EA-18G Growler pilot is found to have been aimed at another service member, the offending sailor or sailors could face mandatory counseling, career-damaging service assessments or even a court-martial and discharge from the Navy.