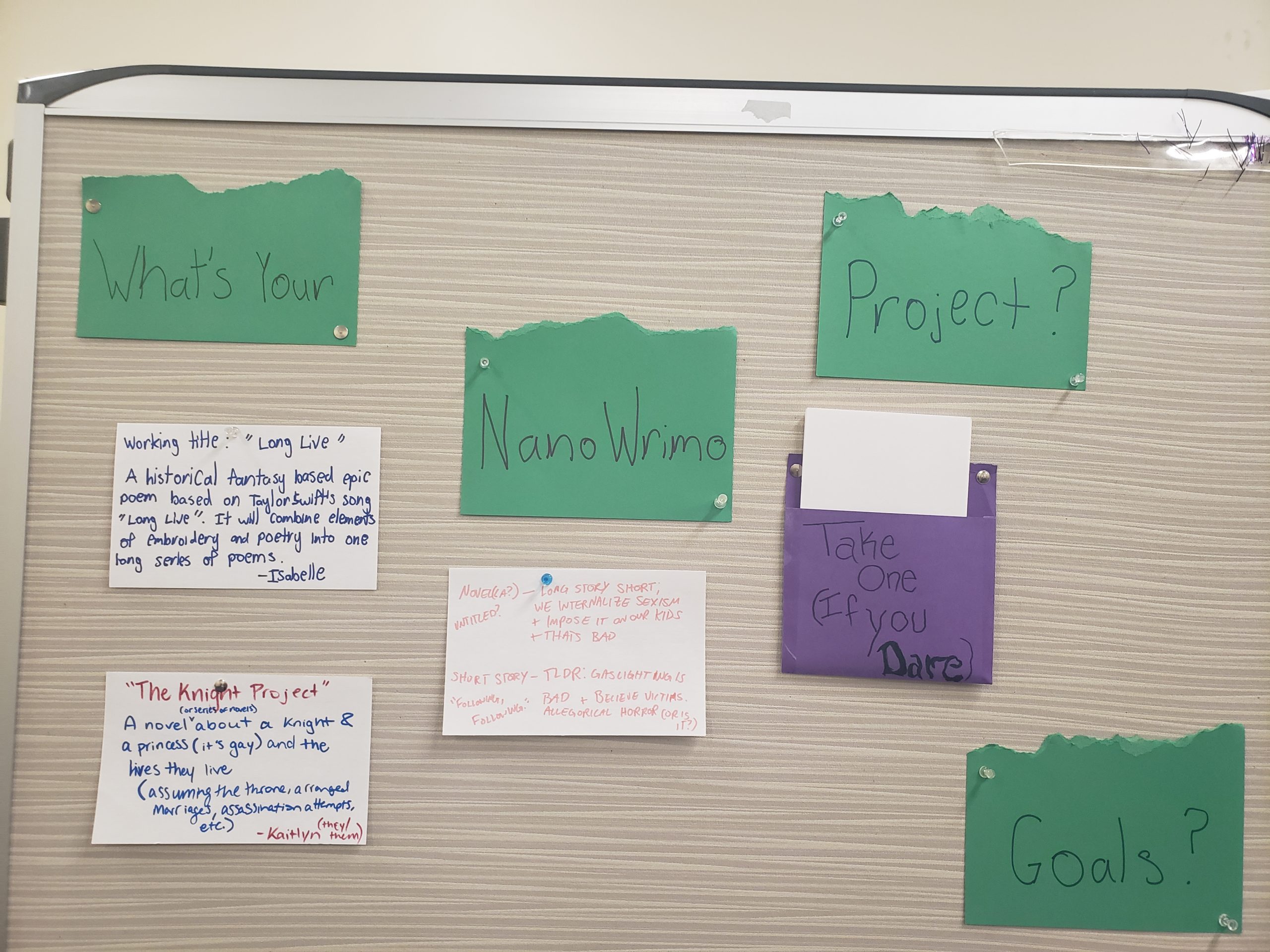 Ever had a literary passion project or idea so good, it should be a novel? If so, then National Novel Writing Month (NaNoWriMo) offers the opportunity to make this dream a reality. This challenging yet stimulating event being observed by the Writing Resource Center (WRC) is here to help writers who may not have the inspiration or dedicated space or time for writing. Two Student Writing Assistants (SWAs) and second-years, Kaitlyn Bates and Isabelle Campesi spoke with the Catalyst to give the student body all the information necessary should they be interested.

For an overview, NaNoWriMo is a one-to-two month long intensive creative writing program to help writers get started on or finish any works in progress (WIPs). In the official capacity through the NaNoWriMo website, one can participate in structured prep courses beginning in October and then compete with writers in November to produce a 50,000-word novel. Many published writers themselves compete with the event producing several published books.

Don’t let the use of the word “intensive” intimidate you. NaNoWriMo is a month about having fun and getting projects started, and to bring writers together and form a community.

“You’re not being evaluated at the end of the day, there’s no pressure,” Campesi said.”It’s because you love the project.”

“Have fun, don’t stress, and love what you’re working on!” Bates added. “We are all always working on academic assignments that we barely have time to be creative and really experiment with what we love to do.”

The WRC is not participating to the same extent as the official NaNoWriMo website; the goal to end up with 50,000 words by the end of the month isn’t very realistic for students occupied with schoolwork and jobs. The WRC is instead making this month about fostering creative writing potential and getting over the hardest part of writing: getting started.

“I wouldn’t say there are incentives in the traditional sense, but for me, I have a project that I’ve been wanting to start for years that I haven’t had the motivation or energy to do so,” Bates said,

The WRC wants students to have two things when attending their events for NaNoWriMo: the idea for their piece, and a realistic goal for the end of November.

“I would like to give myself a chance to work on a passion project and see what I can realistically accomplish in a month with my regular schedule,” Bates said.

There is no obligation involved, just a deadline, so join the four students already aiming at perfecting their creative writing abilities.

If you missed the Oct. 31 kickoff event held at the WRC and are still interested in participating, the WRC will be holding more events in the coming weeks according to Campesi. No dates are available yet due to Tropical Storm Nicole, but keep an eye on the forum for information from the WRC.

This event, geared for goals and projects, is just what any struggling writer should be looking for. While not being officially tied to the event,the WRC is respectfully replicating the ideals of what the NaNoWriMo website calls a “nonprofit that believes in the transformational power of creativity.” Whether it is a science fiction piece or a memoir, anyone is welcome in the WRC as a participant and your writing will be fostered.