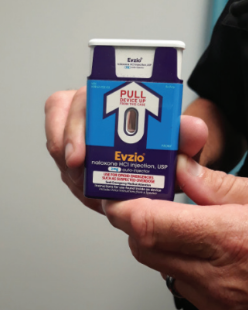 To combat the ongoing opioid epidemic and the rising risk of mass casualty situations, the Campus Police Department (CPD) has recently equipped itself to deal with potential tragedies. All CPD officers have been carrying naloxone, an anti-opioid medication, for nearly three years and are beginning to implement tourniquets, belt-like bandages employed to prevent a victim from bleeding out. The CPD will soon be offering trainings in partnership with Stop the Bleed, a national awareness campaign, on proper use of these tourniquets.

“Learning this simple skill of applying a tourniquet can be done without sophisticated medical background or particular specialized knowledge,” Captain Kathleen Vacca said.

The tourniquets will be strategically placed around campus inside of automated external defibrillator (AED) first aid kits with the idea that, if an incident occurs, the campus will be better-equipped to deal with it.

In addition to using tourniquets, officers carry naloxone. While a small percentage of students misuse pain relievers, opioid-related fatalities in the United States have tripled from 2000 to 2015.

In 2016, the American College Health Association released a set of guidelines to universities on prevention and treatment strategies for opioid misuse. One of the guidelines suggested that colleges and universities ensure emergency staff members have adequate experience with naloxone and managing the airway of an unconscious individual.

John Chirgwin, a CPD officer with more than 15 years of policing experience, knows just how life-saving Naloxone can be. Over the summer, Chirgwin and another officer administered the medication to a woman in Manatee county who overdosed on an opiate drug, ultimately saving her life.

“That person absolutely would have died if we weren’t able to get there quickly enough to intervene,” Chirgwin said.

Additionally, while Chirgwin served time as a detective in Cincinnati, he recalled a day where 17 people died from heroin that was laced with carfentanil.

The CPD’s advice to students is to stay away from heroin or any other opiates, especially when alone.

“If they’re alone in their dorm room and they do it, there’s no one to call us to come help,” Chirgwin said.

If students end up in a dangerous situation, medical amnesty protects those who seek medical action as a result of illegal actions. For example, if there’s a situation where two people are using opiates and one of them experiences signs of an overdose, the person who calls for help cannot be arrested.

“God forbid someone would use opiates here and overdose because the person with them failed to call 911 because they were scared to be arrested,” Chirgwin said.

Students interested in attending a Stop the Bleed training should look out for upcoming announcements on the New College website or reach out to the CPD for more details.