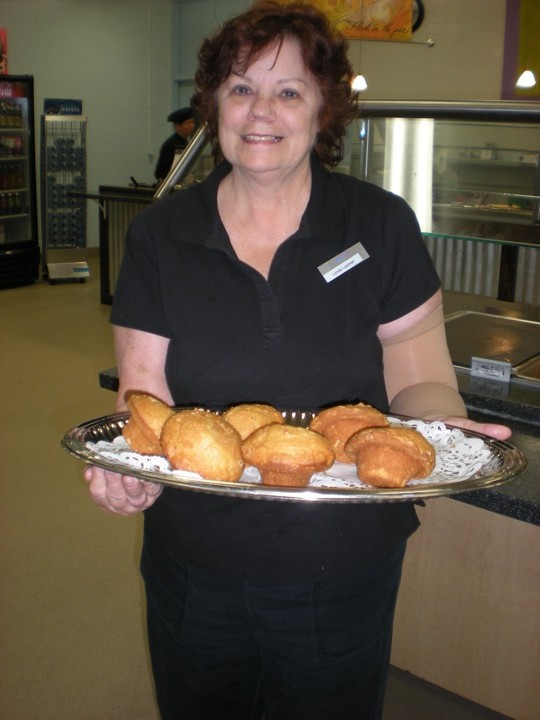 Layman holds a batch of her freshly baked muffins.

For the past six months, Sodexo employee Lynda Layman has been making muffins for the café to sell. Banana chocolate chip, pumpkin, lemon poppy seed, streusel topped and carrot cinnamon chip muffins have been her latest creations. She has been worked in Hamilton “Ham” Center for the past three years.

“I make as many as I possibly can,” Layman said. “The last several batches I’ve been making have been suggestions from the students. I began asking them when they bought the muffins as I was cashiering what kinds they liked. I got some really good ideas of what kind of muffins to make in the future. I tried some of them — I took their ideas. I keep trying different ones.”

She starts out with a basic muffin mix and then adds flavorings and fruit to it. She also bakes cookies, banana bread and coffee cake for the café. She bakes these sweet treats along with the muffins in her free time. The banana bread like many of her recipes is her own.

“A lot of them come from my head,” Layman said. “I’m a quilter. I design a lot of the things that I do. For instance, I design clothes. So it’s easy to design recipes when you do things like that. I don’t know if that makes sense to you, but recipes are kind of an extension of the way that you think about food. So sometimes you can expand your own tastes in order to design a recipe and that’s what I do.”

The muffins are moist and their flavors are nuanced. The pumpkin muffins had a buttery oatmeal crumb topping and a kick of spice that enhanced their pumpkin flavor.

Layman said that if she had the time, she would bake pies for the Café. “I’d love to make pies,” she reflected. “I enjoy making pies — unusual pies, chocolate pies. I, believe it or not, enjoy making rhubarb pies. They are an acquired taste, I’m afraid. I like making strawberry pies. I like peanut butter pies, they go over really well. I like making cheesecake too.”