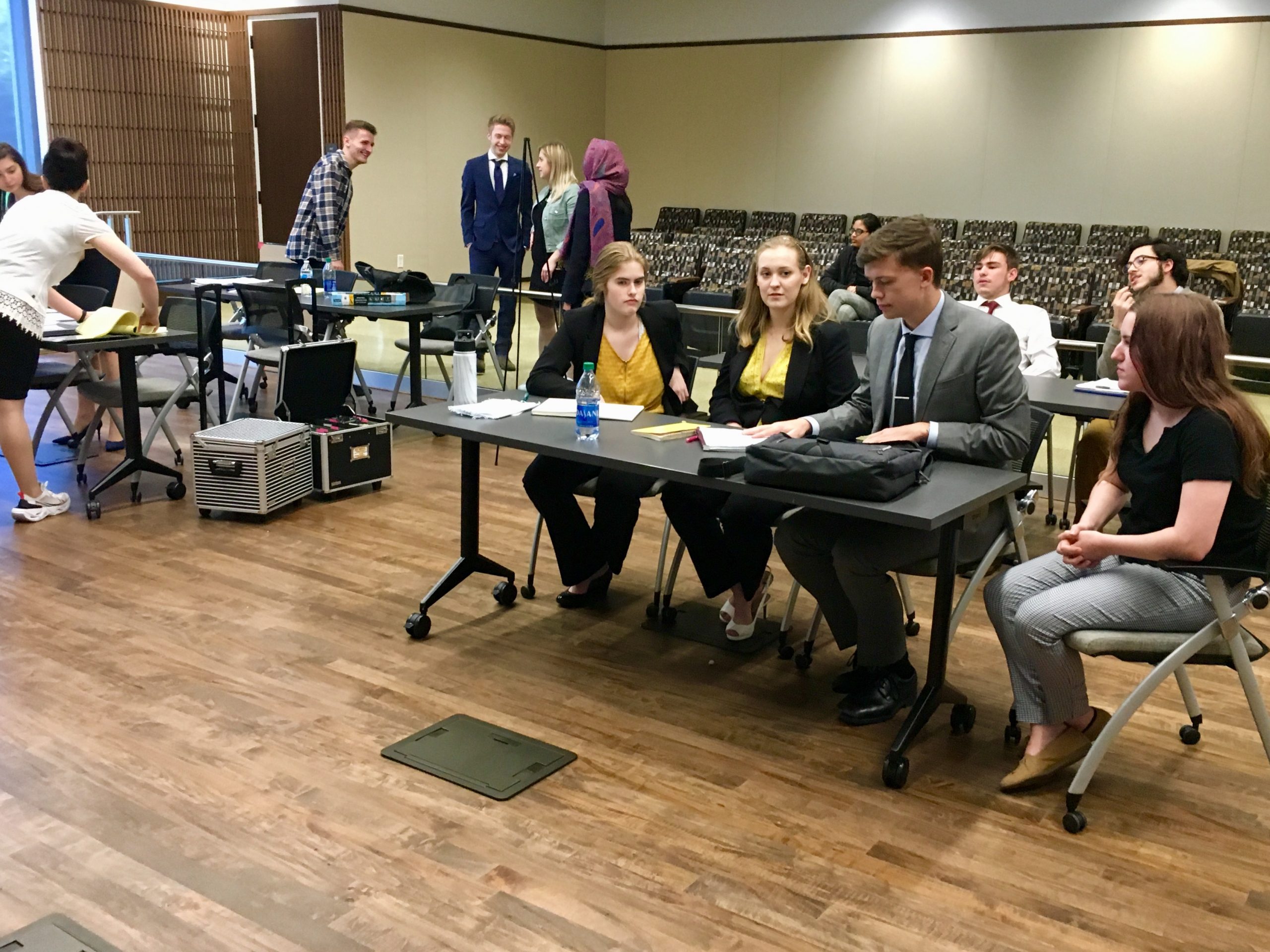 On Jan. 31 the New College Law Society (NCLS) sent a team of ten students to Orlando for the weekend to participate in a mock trial tournament. This was the first team from New College to compete in a mock trial tournament ever. They left at 2 p.m. that Friday in the New College van, in a vain attempt to beat the awful Orlando traffic, hoping that they would be able to hold their own against the more experienced teams. After getting to the hotel, the team studied and prepared for their first matches until midnight.

Early Saturday morning they went to the University of Central Florida’s (UCF) Orlando campus, and competed in the first two matches. At six p.m. they went back to the hotel to go over their notes and work through issues. Thanks to the match’s later starting time on Sunday, they went into the next stretch more well-rested. At the end of the competition, they finished 1-3, having scored better in every successive match. On that Sunday night (and, due to awful traffic, Monday morning) the team made its way back to New College, already talking about what they needed to do for next year, now that they had some experience under their belts.

“I was extremely impressed by how [the NCL] did,” David Fugett, General Counsel for NCF and NCL’s coach, said. “They showed a lot of guts; they were fearless. They went up against these schools that had been doing it for years that had all of this advanced preparation. None of our students had even done this in high school. This was their first time ever going up against another school, and they were going up some of the best in the country.”

The mock trial team is only one part of the NCLS. The NCLS is designed to coordinate smaller, more specifically focused law-centric clubs. The sub-club that encompasses mock trial is the Novum Collegium Litigos (NCL), Latin for “New College Disputers.”

The NCL is focused around law-based competitions, like mock trial or moot court. Mock trial, what the team competed in, is where two teams play the prosecution and defense of a fictional case. The evidence, witness affidavits, law statutes and stipulations are given ahead of time. Each team consists of three attorneys and three witnesses. The witnesses are drafted with the other team immediately before the match, so the teams must have some alternatives in mind going into the match. The teams also need to be able to play either the prosecution or the defense, though they can appoint different attorneys for the prosecution and the defense.

The case during this competition was the fictional Midlands State v. Jordan Ryder, on the charges of manslaughter and child endangerment or murder, depending on how the prosecution proceeded. Jordan Ryder was the recently incarcerated parent of Parker Paige, a 12-year-old girl with brittle bone disease. Jordan took Parker out to Caulkins campground, where she would fall to her death. The case includes nine witnesses 29 pieces of evidence, ranging from a crumpled napkin to Parker Paige’s walking stick. The teams were charged with creating both a damning prosecution and a complete exoneration of Jordan Ryder using the evidence and legal statutes and being able to argue either side. Their judges included law students, lawyers and actual judges. While most teams at the tournament had gotten the packet back in the Fall of 2019, NCL, due to their late conception, only got theirs in November.

“We didn’t get the money to pay for the material until the week of the deadline,” Rhys Shanahan, second year and president of NCLS, said. “We didn’t receive it in the mail until from [the American Mock Trial Association] until November. So, we didn’t start until very late.”

To make up for lost time, the NCL made use of the greater free time during ISP month to practice.

“The mock trial team, along with two other students [from the Advocacy and Persuasion ISP], practiced every single night,” Shanahan said. “Two hours each night. Sometimes, we rounded up to three. Sometimes, four.”

Izaya Garrett Miles is a member of NCL and NCLS