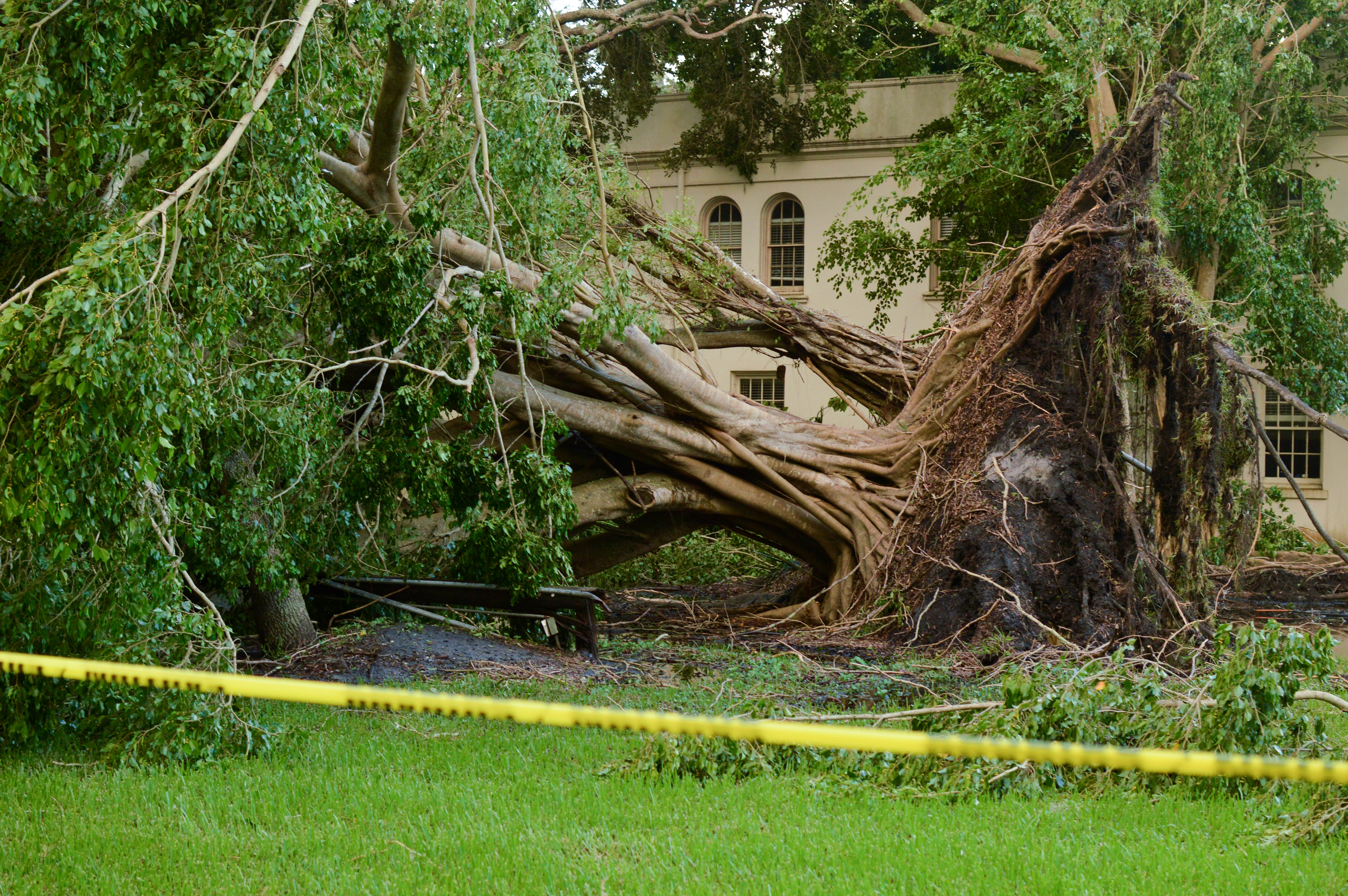 According to Alan Burr, over 46 trees were removed from campus by Physical Plant following Hurricane Irma. (Photo by Azia Keever)

The recent removal of several trees on campus has garnered attention. The absence of trees, with their often large and unforgettable presence, is symptomatic of a larger issue concerning bureaucratic processes and lack of student input.

These trees are not just valued by alums or current students, but also by researchers such as Assistant Professor of Biology, Brad Oberlee. Oberlee studied tree biology and how the diversity of trees helps influence the kind of services they provide in their ecosystems while obtaining his PhD from Washington University in St. Louis, Missouri. According to Oberlee, there are over 100 different tree species on campus–part of what motivated him to work here.

“We have a lot of cool trees!” Oberlee said. “Most native species are more diverse as you get nearer to the equator. […] But, the majority of the trees we have on campus are actually native to other places but were planted here for a service or to provide beauty for the campus.”

One example is the camphor tree, native to Asia, that is located at the bayfront side of campus.

“We have trees like the camphor tree that people like to climb that’s near College Hall–that’s what I like to call a legacy tree,” Alum and current adjunct professor of Introduction to Environmental Studies, Jono Miller (‘70), said. “That tree was planted when [John and Mable Ringling] were here. If the Ringlings hadn’t planted that tree, or the orchid trees on the way to the Four Winds, we wouldn’t have them [on campus] because they are invasive species. But because they are part of our heritage from the Ringling era, we aren’t cutting them down.”

In addition to having graduated with an Area of Concentration (AOC) in Environmental Studies, Miller is also the former director of the Environmental Studies program at New College, who also served as a Chair of the Landscape Committee in the past. Miller is currently applying to serve on the City of Sarasota Tree Advisory Committee.

Miller explained that the decision on whether or not a tree is removed from campus is decided by a tree matrix drawn up by the Landscape Committee.

According to Miller, the current Head of the Landscape Committee recently left the position.

“We no longer have a person in that slot,” Miller said. “The committee hasn’t been functioning this fall, the position is unfilled at the moment and we’ve had more trees damaged in a single event from [Hurricane] Irma than I can remember in any other single event in the last 47 years.”

The fact that the Landscape Committee hasn’t met once this semester is a major concern for Miller.

“No tree is supposed to be cut down on campus without having gone through the Landscape Committee and that includes dead trees,” Miller said.

According to the Director of Facilities and Construction, Alan Burr, the role of the Landscape Committee is minimal.

“The Landscape Committee provides input and recommendations to the president and handles things that are relatively low level as far as the landscape is concerned,” Burr said. “Any tree that is dangerous does not need to go to the committee, they’re simply informed.”

Burr states that tree removal is regulated by the state of Florida and that New College follows regulations outlined for Florida colleges and universities.

“Trees are removed from campus whenever it’s necessary,” Burr said. “Generally if it becomes dangerous and is in danger of falling on a walking area, parking area or a place with a lot of activity.”

“They’re hollow in the trunk, and that’s dangerous,” Burr said. “Its limb or itself would fall and damage people or property.”

Miller stated that dead trees were not as dangerous as people may think that they are.

“One of the things you’ll notice is that we have a number of dead pine trees on campus, none of those blew over, which people find paradoxical,” Miller said. “People assume that a dead tree is going to fail and a live tree is gonna prevail. And what more frequently happens is that the dead trees don’t fail and that live trees do. That’s because a dead tree has very little wind resistance, there’s no leaves on it, so there is nothing for the wind to push against. It’s sort of like a sailboat mast. But if you put a sail on the sailboat, there’s suddenly a lot of push.”

According to Burr, over 46 trees were removed after damage from Hurricane Irma.

“I feel as if there have been so many generations of New College students that have seen the same trees that I have and now some of them are gone,” third-year and Council of Green Affairs (CGA) Residential Garden Teaching Assistant (TA), Daniel Niedospial, said. “It instills a feeling inside of me that makes me want to be more active in producing more trees onto campus. […] While it’s really disenheartening to see these old, really important trees being taken from us, it’s kind of motivating in some way to counteract that from happening.”

However, according to Burr, student initiatives on campus are often abandoned by students.

“The students often come to us wanting to put gardens around campus and we don’t seem to have any good maintenance from the students on their gardens–they normally turn into weed beds,” Burr said. “And then they get busy with their studies.”

When it comes to accessibility, if a tree obstructs a sidewalk or a road, then it is removed.

“If you’re in a wheelchair, presumably you’re going to be confining your movements to firm surfaces, and so we allow dead trees to remain on laws and open area where they are not going to fall on anything,” Miller said. “I don’t think there’s very much risk.”

“They are so persistent,” Miller said. “Most of the the students are going to experience, they can come back during their reunion and be able to sit under those same trees. It’s just as much a part of the campus as the buildings.The whole fact that some of these trees are from the Ringling era, […] it forms a connection to place. People love climbing that camphor tree down by the bay. One of the things that happens is that people end up associating specific events with landmarks. […] The landscape becomes imbued with memories and the meaning is sort of attached to the landscape. People start associating their feelings and recollections with the landscape.”

“If we had been more thoughtful, we would have had a pre-disaster tree strategy in place,” Miller said.

“We’re making judgements about the survivability of a living organism because it’s challenged in some way,” Miller said. “Trees can live with a lot of problems.”

Oberlee has been conducting research to understand the risks of dead trees which is currently being submitted for publication.=

“If you look across the entire eastern United States, a standing dead tree from the moment it dies has a 50/50 chance of standing for the next eight years,” Oberlee said. “It really depends on where it’s growing, how big it is, and how much decomposing has happened.”

“Dead trees store a lot of carbon, when you cut down a dead tree, it is disposed of in a landfill or it decomposes quickly, the more dead trees we have, the more carbon we have,” Oberlee said. “We have a Climate Action Plan we subscribe to which is keeping more carbon on campus.”

“Losing carbon from our campus is bad because that carbon goes to the atmosphere,” Oberlee said. “One specific benefit is that they provide better habitat for different kinds of important species.”

“Our campus would really benefit from having a tree care plan, which is something a lot of   campuses have, it guides contracts with arborists, planning, incorporates benefits,” Oberlee said. “Our current Landscape Master Plan and Campus Master Plan talk about the tree but don’t have any policies that would help us with that resource effectively.”

Oberlee is also working on research with Professors Jayne Gardiner, Sandra Gilchrist and staff Julie Morris, as well as the Sarasota Bay Estuary Program, on a nature preserve that New College helps manage. Oberlee also worked with students to create an index of all tree species on campus. He is working with Professor Emily Saarinen on a map of trees on campus, as well as applying to have the campus recognized as a public tree collection.

Minutes from past Landscape Committee meetings can be found on the Students List or by contracting Alan Burr via email.

The Growth Plan and Landscape Plan can be found at ncf.edu.