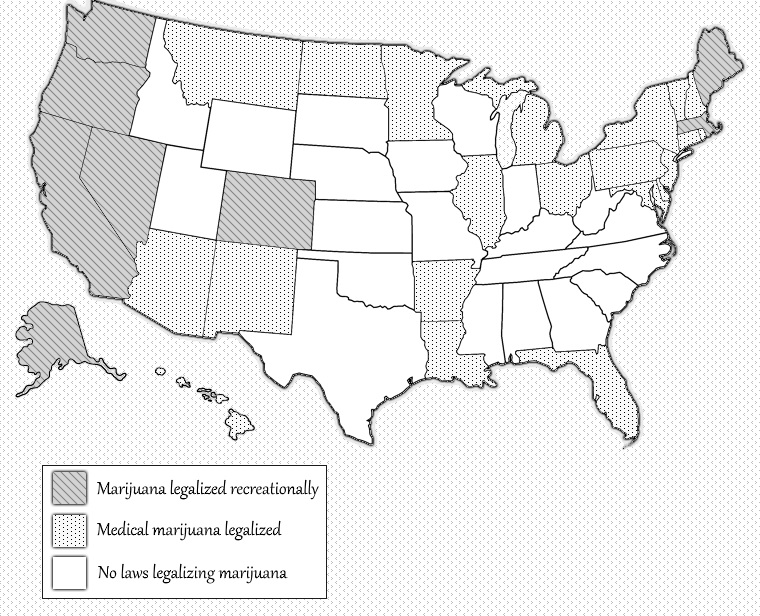 More states than ever before have laws that legalize marijuana. In the most recent election, North Dakota, Arkansas and Florida passed ballot initiatives legalizing the medical use of marijuana.

Many states have also decriminalized the possession of small amounts of marijuana. The rate of marijuana tolerance has gradually increased nationally, though states ultimately regulate the laws and conditions that allow for treatment.

National marijuana toleration is increasing, but what about psychedelics?

Though support for legalizing psychedelic drugs is low, current research suggests that there are certain benefits of both psilocybin mushrooms and lysergic acid diethylamide (LSD). Many clinical trials have demonstrated that psychedelics can profoundly improve areas of difficulty such as spiritual wellness, addiction, OCD and depression.

A Phase III trial, the final step before FDA approval, for psilocybin mushrooms could start as soon as next year.

The support for psychedelics is led by organizations such as Psymposia and the Multidisciplinary Association for Psychedelic Studies (MAPS).

Pysmposia is a magazine that provides important stories, conversations and interviews about emerging social issues on psychedelic science, drug reform and harm reduction. As a leading source on drug reform, Psymposia attempts to educate its readers about drug policy, safety and research.

MAPS, founded by NCF alum Rick Doblin (’87), is a non-profit research and educational organization that “develops medical, legal, and cultural contexts for people to benefit from the careful uses of psychedelics and marijuana.” The vision statement found on www.maps.org states:

“We envision a world where psychedelics and marijuana are safely and legally available for beneficial uses, and where research is governed by rigorous scientific evaluation of their risks and benefits.”

The 2016 United Nations General Assembly Special Session (UNGASS) on drugs is notable for increasing the voices of non-governmental actors, representing civil society in the session for the first time.

Civil society is also getting involved outside of the UN, with groups such as Students for Sensible Drug Policy (SSDP), Moms United and the Latin American Caravan for Peace, Life and Justice rallying hundreds of people to call for repealing global drug prohibition.

On April 19, 2016, a demonstration outside of the UN headquarters advocated for the support for access to psychedelic drugs.

The demonstration took place on April 19 to commemorate Bicycle Day, or April 19, 1943, the date that Swiss chemist Albert Hofmann intentionally ingested his new creation of LSD-25. Hofmann reportedly took off for home on his bicycle when he began tripping on his creation. Hofmann reported wavering vision, a sense of motionless, and a “weird, unfamiliar world.”

The demonstration was led by Psymposia and the Psychedelic Society of Brooklyn. The two groups took on the question of why to use and support psychedelic drugs by providing personal answers under the format of “Psychedelics because…”

The increased social involvement in drug reform suggests that the stigma surrounding psychedelics is slowly declining. In addition, an influx of research provides scientific evidence that psychedelics benefit areas like spirituality and creativity and can help with depression, OCD and PTSD.