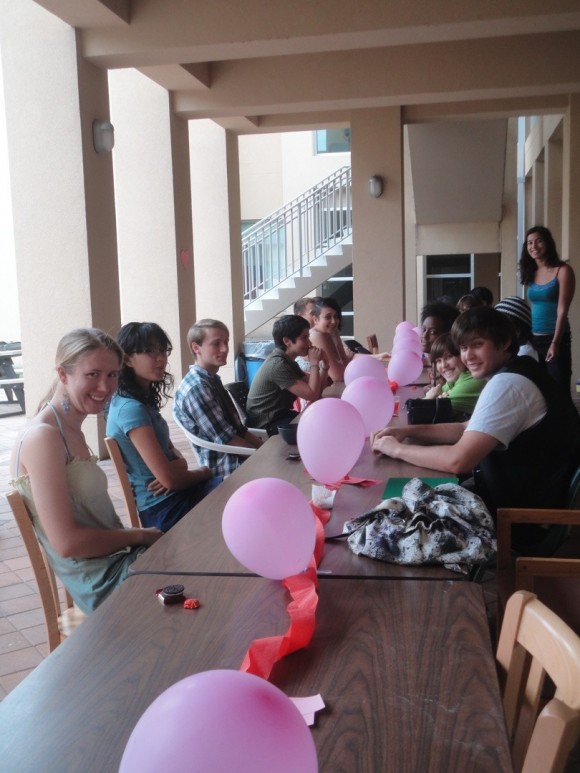 About half of those that RSVP’d showed up, while stragglers filled in the empty seats.

He asked what color my panties were. Four minutes later, it was over.

On Feb. 25, New College resident advisors (RAs) held a speed dating event and the Catalyst got in on the action. Third-years Seth Borden and Stephanie Larumbe organized the affair, asking participants to RSVP and send in awkward questions to kick off each date.

“We just wanted to get people to meet each other, so this was a cool way to do it,” Borden said. “The cool thing is you start and maybe you don’t know anyone, but you end up meeting all of them.”

Faster than a quickie and just as tantalizing, speed dating hit the scene in late ’90s. According to Larumbe, the typical setup is a long table at which women sit on one side and men on the other. Each date lasts only a few minutes, and after the organizer gives the cue, all those on one side of the table move over to the next seat to begin a fresh date.

For New College, a few changes were made. Rather than assume participants’ sexual orientations and gender identifications, Borden and Larumbe advertised the event as a way for students to mingle.

“Typically [speed dating is] very gender biased,” Larumbe said. “We decided to make it a friendship and dating thing so we didn’t really have that divide.” A good call, as in keeping with NCF fashion, over half the 20 participants were female bodied.

The event took place outside of Z-dorm kitchen, where the RAs placed long tables end to end in what would become a long strip of random conversations. Instead of alcohol, they provided chocolate squares, cookies and sugary virgin drinks, all to put the speed in speed dating. I got hyped off sucrose waiting for the dates to start. Then the cue came.

My first date was a stranger to me. She seemed super at ease and we jumped right into a conversation. I was talking fast, aware of our limited time, but still the cue to move on to the next date came faster than expected.

To be fair, as all of us were students, it wasn’t as difficult to begin talking as it might be outside of college — though I had never met most of the participants, we all had student life to bond over. The provided prompts really helped move things along in case of a lull and some of my dates were nothing but at-hand questions.

Every four minutes, I was sitting in front of a new person, starting a new conversation. The event was fast-paced and each new date was like a loop in a roller coaster, a stark change of direction without losing speed. I pondered the psyche of cats with one date, grieved over thesis work not yet done with another, connected with someone over our desire to meet more students and lightly caught up with a few people I already knew. With almost every date, I wanted more time to talk.

I had come in to the event nervous, not being a fan of first impressions, but the good thing about having a short time with someone is there is less of a chance of screwing up a conversation. There was no pressure to impress the dates, because the atmosphere was casual and friendly.

After an hour and a half, I had met all the other students and the event was over. In typical speed dating, participants have the chance at the end to tell the organizers who they would like to meet again and the organizers provide the contact information for each match. I was a little bummed that such a process didn’t happen at this event, because, okay, I did develop a slight crush. Let’s call him Anthropology Boy. He started our date by declaring that we would not be bound by preformed questions and because he was charming, I decided his statement was bold and adventurous.

Lucky for me, the RAs said they will likely have another speed dating event in the future, maybe with a few changes. “I wanted to have a big timer up, so people would be able to see how much time they had left,” Borden said.

My unbiased suggestion is for the organizers to keep tabs on who is crushing on who and play match-maker.