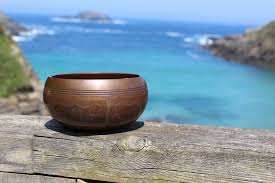 Some 20 New College students were scattered around the Bayfront this Wednesday afternoon, Feb. 13, as part of a new tutorial entitled Mindfulness. Lynne Lockie, the tutorial’s instructor and a board member of the Sarasota Mindfulness Institute, used a singing bowl nearby to cue students when to walk and when to pause as they concentrated on the sights and sounds outside by the Bay. This walking meditation is one of the many activities used in the tutorial which all aim to promote stress reduction and self-awareness among students.

“Mindfulness is basically about grounding yourself, about finding a space—mental space, physical space—where you can feel grounded, connected, present,” Professor of Religion Manuel Lopez-Zafra, the tutorial’s sponsor, said. “And that’s something that’s not always easy to do. We live in a world in which we’re constantly distracted, and sometimes it’s very difficult to even hear yourself. The tutorial’s goal is to allow people and to create a space so people can explore something that is very important to all of us, which is our own minds. But it’s not neuroscience what we’re doing here, or a psych class, it’s a different approach.”

Previously, spiritual communities primarily observed concepts involved in mindfulness. More recently, Western and secularized groups have advocated for the practice of mindfulness, such as the United Kingdom’s National Institute for Health and Care Excellence (NICE) and the American Psychiatric Association (APA). A spate of recent research has also supported mindfulness’ effectiveness for reducing stress and fatigue, enhancing creativity, increasing compassion and empathy and improving decision-making abilities, such as the ability to avoid addictive behaviors.

“One of the interesting developments that have happened over the last few years is this expansion of meditation all over the world—transforming what was a religious tradition into a secular practice,” Lopez-Zafra said. “You don’t have to be a Buddhist [to be able to] use this practice of meditation to find yourself present.”

Shifts in the way people interpret the practice of mindfulness have provided unique opportunities to use the technique in practical ways. In the context of New College, establishing mindfulness in the school’s curriculum might be a way to expand what students are capable of learning while enrolled.

“When people think about New College, as students and prospective students, they think that [mindfulness] is something that is at the core of what we do,” Lopez-Zafra noted. “We spend years here, not only as faculty members, but as students, trying to work with your mind, but sometimes we don’t really spend a lot of time looking at our own mind. I think mindfulness provides those tools, and it can be very useful, in terms of creativity, in terms of writing, in terms of managing stress.”

“The different people from the Mindfulness Institute were all good, but Lynne was very special,” Lopez-Zafra said. “Lynne has 60 years of practice and she really represents what I like about mindfulness, [which] is someone who is really grounded, who is very present and is very good at teaching. It’s not just about sitting and meditating; she can see what the students want and adapt to each one of them.”

Lockie, a clinical social worker and therapist, started the Minnesota Zen Meditation Center in the 1970s and was a founding board member of the Chattanooga Center for Mindful Living around 2012. As for leading classes in mindfulness at New College, Lockie is excited to be working with the school.

Support from students, faculty and staff ensures mindfulness a promising future on campus.

“I want to see this being offered regularly, every semester, not only for students but for faculty and staff,” Lopez-Zafra said. “I want it to be a part of the culture. Not everyone has to do it, it doesn’t have to be mandatory, but it should be something that is available to everyone on campus—that would be my goal in the next few years. And something that we just started is the idea that there would be a couple of places where you can go during the day, and you can feel like you can just do it.”

Lopez-Zafra also noted that the administration has been helpful with implementing mindfulness on campus.

“The Provost has been very supportive, and we need the support because it’s very important,” Lopez-Zafra said.

With exercises in compassion, creativity and concentration and opportunities for students to disconnect from various expectations and distractions, the goals of the Mindfulness tutorial extend much further beyond the scope of a semester.

“This is something you can use all your life,” Lockie stated. “If you just learn to just stop, breathe and take a wide view, you don’t have to get caught up in the bad decisions you might make if you’re stressed. You can use mindfulness to be skillful, and skillful is whatever is helpful to you and other people.”