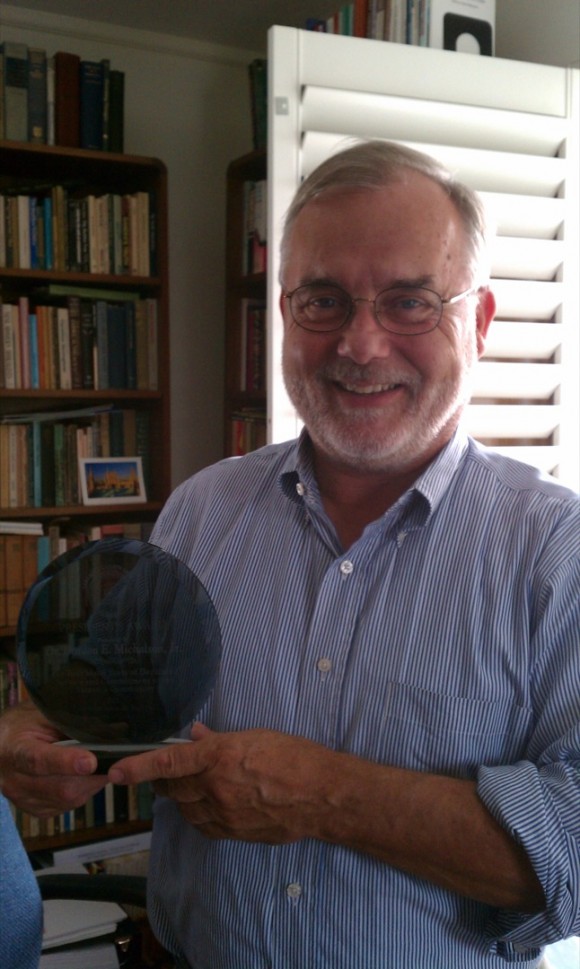 Michalson poses with the NAACP award in his office. Student members of the President’s Advisory Committee on Diversity Tristan Zucker and Destiny Lyals also attended the event.

“I think one of the great things about the local chapter of the NAACP is that it is a setting where the community really comes together,” New College President Gordon “Mike” Michalson said. Hundreds of guests filled the Sarasota Hyatt Regency ballroom for the Sarasota chapter’s 26th annual NAACP award ceremony. The theme of the evening was “Affirming America’s Promise: Looking Back, Moving Forward, Changing the Future.” Eleven awards were given to local individuals and institutions which exemplified the NAACP’s mission.

“I think I was recognized mainly because of the institution I lead,” Michalson continued.

The President of the Sarasota chapter of the NAACP, Trevor Harvey, called Michalson to ask if he would accept the award. “I said, ‘Are you sure you have the right person?’ and he said, ‘Yes,’ and I said, ‘I’d be very deeply honored, very humbled,’” Michalson said. “So long as he understood that I was really accepting it on behalf of the entire New College community.”

According to Michalson, the award honors New College’s efforts to reach out to the community and provide programs such as Next Step Tutoring, the Boys and Girls Club in Newtown, Y-ACHIEVERS mentoring program, and the PUSH/SUCCESS summer program. Professors of Biology Sandra Gilchrist and Elzie McCord were honored in the chapter’s 2006 awards ceremony for their work with the PUSH/SUCCESS program, Gilchrist with an Education Freedom award and McCord with a Community Service Freedom award. “I think we have an array of activities at the college that got the attention of the NAACP and they figured, ‘let’s reward the leader of the place,’” Michalson said.

Of the eleven awards given this year, three were President’s awards. The other two President’s awards were received by recently retired Community Foundation leaders Wendy Hopkins and Mimi Goodwill. Other awards included the Lifetime Achievement award, Rising Star award, Public Service award and the Business and Industry award,

For Michalson, the award ceremony was gratifying. “It’s always nice to see the community coming together in ways you don’t always see,” Michalson said. “The NAACP is devoted to cutting across racial and economic divisions in a community that is kind of segregated both racially and economically.”