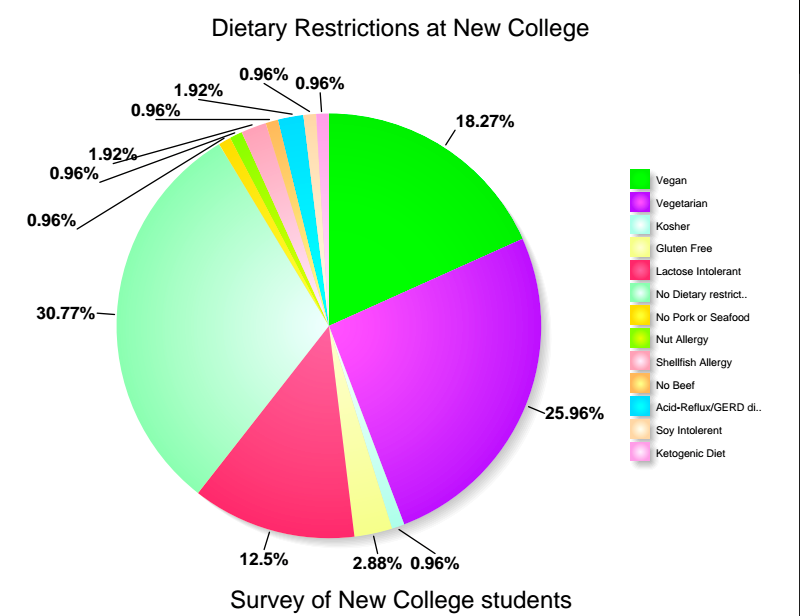 While dietary restrictions often become second nature to impacted students, they are something that many New College students live with and are searching for accommodations for.  For students who make lifestyle choices to have a vegan or vegetarian diet, finding food in the Hamilton “Ham” center does not seem to be too difficult.

“I find it very easy to be vegetarian here because of the meat-free options such as cheese pizza, tofu burrito bowls, and veggie burgers that are regularly available in Ham,” first-year Aiden Juge said in a survey of New College students.

“I’ve found lots of vegan snack foods in the C-store which is really cool,” first-year Leah Bender said in an email interview.

“Worst case I go and eat a sub from the c-store which is still amazing,” thesis student and Catalyst staff writer Dylan Pryor said, who keeps Kosher.

Being vegetarian or vegan can even sometimes be a fun or new experience for students because these options seem to be readily available to any student who is willing to take a risk and try them.

“I think it’s nice because now that I’m a vegetarian I’ve been trying a lot more options that I wouldn’t have tried before,” second-year Angela Duda said.

However, some students who have been vegetarian or vegan for longer periods of time often feel bogged down by the lack of variety in the meat free and meat substitute options that Ham provides which often seem repetitive and uninspired.

Because of the population of vegan students on campus finding lactose-free foods are not hard to find either.

Students with other dietary restrictions may find it more difficult to find food in Ham because they are part of a smaller population which require accommodations to regular Ham practice.

Thesis student Lena Santos has been on a GERD diet which consists of mostly bland things because of bad acid reflux and often struggles to find food in Ham that will not be upsetting to her stomach and enjoyable.

“Part of the reason why I don’t go to Ham, because like it’s a lot of money, and I don’t want to gamble if they have something that my stomach will be ok with. Even if they do have something it’s the question of do I want to eat that?” Santos said.

Third-year Mel Klenk has a shellfish allergy which can cause a severe upset stomach and even has to carry an epipen in case of anaphylactic shock.

“Ham, for some reason they put shellfish in everything. The only thing I have counted on for ham is that there is consistently shellfish in one of the dishes they are serving that day,” Klenk said.

Allergies and dietary restrictions like these can cause a problem if the food is not properly labeled. While things such as peanuts and shellfish are usually labeled, according to Metz manager Bill Moore, the state only requires Metz to list only particular nutrition facts.

“By state regulations you need to include calories, sugar, sodium, and trans fats […] if I start listing everything I’m gonna run out of paper. So what we try to do is get a majority of the major ones,” Moore said.

“The main thing for me for Ham is that they post like some of the nutrition facts, but not all of them. Which is kind of inconvenient because usually what I’m looking at on the nutrition fact labels they don’t post. It seems like if they have enough information to post that they would post the rest of it and maybe they could just put it on their website or just on a piece of paper that’s there,” first-year Steven Bressan said.

Bressan has a ketogenic diet and is restricted in the number of carbs that he can eat daily and needs to keep track of things like proteins in foods which are not usually present on labels in Ham.

“The thing about being Kosher, is that as long as I don’t mix meat and cheese I’m usually ok to eat what they have in Ham. A common problem that I have though, is sometimes it’s not labeled and you can’t really tell whether or not there’s meat inside,” Pryor said.

However, Ham is not the only option for students to get food on campus. There is also Four Winds Café which is a vegetarian or vegan option for students who chose to eat there. However, some students consider it too far away, and often – because of the limited ratio of Ham points that can be spent there – do not consider it to be a viable option to solve this problem completely despite it being a step in the right direction.

“Four Winds is so far away, and it’s actual money which I don’t have. I usually just buy a heap ton of groceries and try to make it through the month on that,” Klenk said.

First-year Natalia Lanao agreed in a survey of New College Students. “I can’t eat in Four winds every day. I also don’t have money or proper transportation to get consistent food from off campus that is vegan,” Lanao said.

In this situation, some students look to get rid of their meal plan when it becomes no longer useful to them. However, this is a feat of near impossibility for students who have tried this option.

“When I still lived in Pei I still had a lot of money left over at the end of the year, so I ended up having to buy out like the entire store just to not waste my money. I wanted to [get off the meal plan] I was not able to though. It’s like notoriously hard to get off of the meal plan so I just opted for the least costly meal plan in the letter dorms,” Santos said.

“I use it [My meal plan] at the C-store to just buy a bunch of snacks and stuff,” Klenk said.

Students in these situations used to be able to sell their Ham points to other students through Sodexo, however, this was stopped because of legality issues when Metz took over.

“I used to sell my Ham points until they disallowed it….  the selling of Ham points was something that was done through Metz, you had to pay them $10 to transfer your points to other students, and then that student would just give you the money,” thesis student and vegetarian Paul Cummings explained.

Some students have found that Ham employees are willing to accommodate them, and often Moore has no problem trying to help students who have dietary restrictions.

“I’ve had a good experience in Ham with my allergies. The staff never puts nuts on the salad bar and very rarely in the food. When there is nuts in the food, it’s well marked,” first-year Sarah Nosacka said in a survey of New College students.

“One day I asked Bill if a mixed salad from the salad bar had any nuts in it and after walking into the kitchen to double check, he told me they never put nuts on the salad bar,” Nosacka continued.

“Other than labeling I haven’t really had very many problems. Bill has been very accommodating,” Pryor said.

To the individuals with dietary restrictions these things become automatic more often than not and are not frequently discussed.

“If you live with a dietary restriction long enough despite any obstacles it usually becomes sort of second nature to you, and it’s pretty easy to find something that you can eat,” Pryor said.