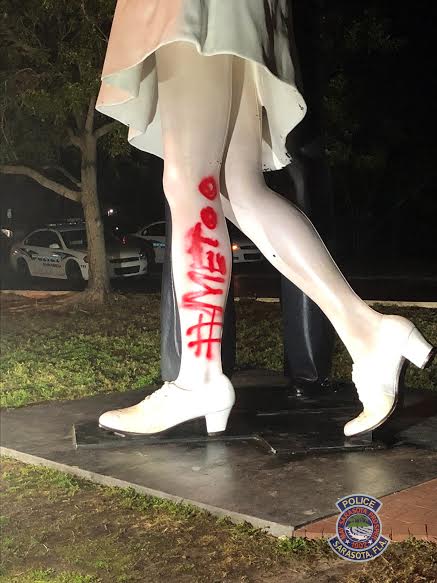 Sarasota made national news for an incident of vandalism on the Unconditional Surrender statue that stands on the Sarasota Bayfront. According to the Sarasota Police Department’s (SPD) news release, #MeToo was spray painted in red along the leg of the woman and the person responsible has not been found.

Unconditional Surrender is based on Alfred Eisenstaedt’s famous photograph, V-J Day in Times Square, of U.S. Navy sailor George Mendonsa kissing Greta Zimmer Friedman after the surrender of Japan in World War II. Tourists visit the statue regularly looking to recreate the embrace with their partners. In recent years, the V-J Day in Times Square photograph and the Unconditional Surrender statue have received criticism due to the encounter’s non-consensual nature.

“It’s worth noting that many people view the photo as little more than the documentation of a very public sexual assault, and not something to be celebrated,” Ben Cosgrove wrote in a 2014 Time article on the photograph.

The spray painting happened shortly after Mendonsa died on Sunday, Feb. 17. According to the SPD news release, the damage is estimated to be more than $1,000 due to the large area that the spray paint covered and the resources needed to repair it.

“It’s just sad to see anyone in this day and age to choose to purposely do damage to something that brings great pride to the community,” John Cloud told WECT 6 News. Cloud owns Gorilla Kleen, the cleaning business that is contracted to regularly clean the statue. Other Sarasota area residents seem to share Cloud’s sentiment.

The Bradenton Herald published an anonymous letter to the editor that accuses the person responsible for the vandalism of “diluting the reprehensible cases of rape and sexual assault with incidents of piggishness.” The writer also stated that, per a conversation with a neighbor who was friends with someone who went to nursing school with Friedman, it was a joyful moment when they rushed out of class to meet soldiers getting off their ship. According to the New York Post, among several other sources, Friedman was not a nurse. She was a dental assistant walking to Times Square from her office. The same Post article reported that Mendonsa was not fresh off of any ship, but on a date with his future wife and said that he was so drunk that he did not even remember the kiss. In the same New York Post article, Friedman was quoted saying, “The man was very strong, I wasn’t kissing him, he was kissing me.”

“We have to engage with it critically, otherwise we are just passively accepting a problematic history,” third-year Art History and Anthropology Area of Concentration (AOC) Evan Murdoch said. “I think it’s really important to look at it in the contemporary moment and see it as grounded in the present and not just this past monument.”

Murdoch expressed the opinion that the statue should be taken down.

“Its charter ends next year, I personally don’t think it should be kept up,” Murdoch said. “The Public Arts Committee is a volunteer committee so hopefully enough people will join it or go to the meetings so that multiple perspectives can be considered.”

Professor of Art History Katherine Brion also offered her perspective on the matter in an email interview.

“The sculpture, and associated plaque, both falsifies the particular historical event/encounter it purports to represent, in part by associating it with both romance and increased aggression due to the sculptor’s choice of scale and color,” Brion said. (Her comment on the associated plaque refers to the sculpture’s plaque describing the surrender of Japan as “spontaneous,” purposefully omitting the nuclear bombings of Hiroshima and Nagasaki.) “The debate and controversy inspired by its presence is nevertheless a great opportunity for education and advocacy around sexual harassment and assault. Not through vandalism, but through more effective reframing techniques like counter-monuments, protests and educational programming.”

Information for this article was gathered from tampabay.com, nypost.com and bradenton.com.