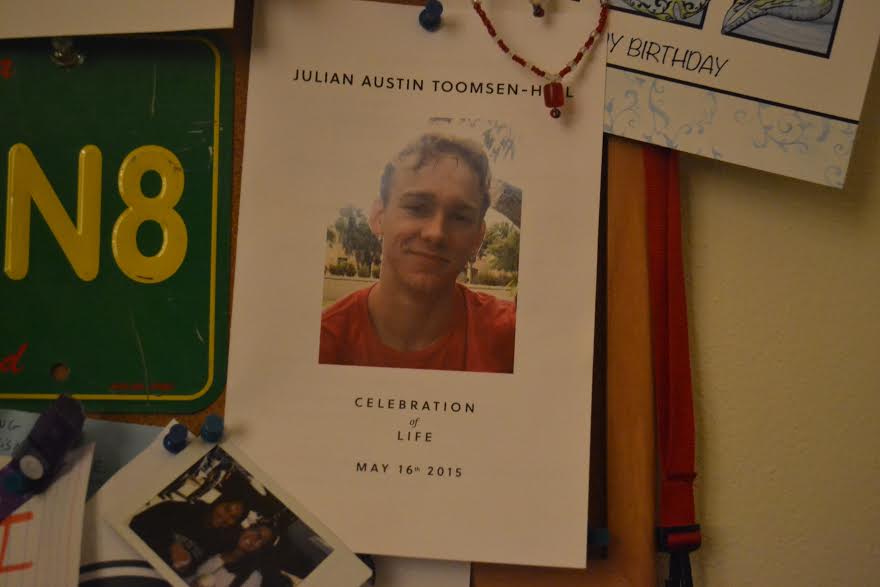 A pamphlet from the memorial that had occurred in Toomsen-Hall's hometown has hung in second-year student, Mei Jing Bernard's, dorm room this school year.

Photo caption: A pamphlet from the memorial that had occurred in Toomsen-Hall’s hometown has hung in second-year student, Mei Jing Bernard’s, dorm room this school year.

This Tuesday marks the one-year anniversary of May 10, the day in which first-year student Julian Toomsen-Hall passed away less than 72 hours after University of Central Florida (UCF) and campus guest, Dylan Besser, also passed away on campus. Both deaths were drug-related.  A memorial service will be held on this day to honor the lives of these two students.

“Oliver [Goldsmith] and I were talking about how we both feel as if this school, and the students, have not fully healed from last year and how we wish there had been more [done] this year to pay attention to that fact,” second-year Hannah Procell, a Students for Sensible Drug Policy (SSDP) member, said. “We really believe that there needed to be something.”

As a response to these events, Graduation Center of the Universe Party (COUP), then known as Palm Court Party (PCP), was cancelled. Additionally, the Drug and Alcohol Task Force, consisting of students, faculty and administration was implemented to review drug safety policies at other colleges and universities. A task report was submitted to the community. Many members of the community point to this event as a source of tension on campus, and a trigger for initiatives from the New College Campus Police (NCPD) to Housing to the Students for Sensible Drug Policy (SSDP) to address substance use on campus.

“There were several different people who felt that organizing a memorial event was something that would be necessary and appropriate for the New College community,” third-year Oliver Goldsmith said. “I ended up speaking with Mark Johnson, Paige, Shelby, Hannah Procell, and Orion Morton, all of whom wanted to work together to make this event happen. This event is receiving funding from the SAC for candles and it received money from the CGA for a tree which will be planted during the memorial event.”

Goldsmith, along with Procell, third-years and co-presidents Paige Pellaton and Shelby Statham, and Council of Green Affairs Orion Morton have been collaborating with Interim Dean of Student Affairs Mark Johnson to organize the ceremony. Pellaton and Statham were also contacted by the family of Toomsen-Hall who would be in the area during this time and wanted to participate.

“This has been on a radar for the past year,” Pellaton said. “We are kind of looking at ideas of how we could make something else in the most respectful way.”

Bernard, who met Toomsen-Hall when they were both 16 years old, was a fellow homeschooled student in the same area in Atlanta, Georgia. The two were enrolled in a Calculus class together.

“We talked about how this would be an important thing to do and why it was so important to not just let it be forgotten,” Bernard said. “[Forgetting] is not something that I think is healthy. I think that the New College administration took the whole summer as an opportunity to never address the problems that were affecting the community as well. They never addressed sensitive drug policy or how badly it affected the community or how much it still affects certain people.”

The tree will be planted on campus in the area behind Second Court and Palm Court. At 6:00 p.m., a ceremony will take place in the Nook consisting of a discussion and a moment of silence. This event will be followed by a candlelight walk to the bay at 7:45 p.m. Counseling and Wellness Center (CWC) counselor Duane Khan will be present at the event due to the sensitive nature of this memorial. Candles were donated by second-year student and Student Allocations Committee (SAC) representative Rebecca “Becca” Caccavo.

Multiple individuals involved in the planning of this event said that administration has been very supportive. The event is being treated as a much necessary moment for the community to reflect. “There has been a lot of tension that has to do with grief and it’s important for us to come together and get some closure as a community,” Statham said.

Pellaton shared this sentiment. “Because Julian’s family is going to be in the area, we definitely think it’s important to see how appreciated their son was. […] We as a school also have a short institutional memory. This is definitely a moment that merits coming together for.”

“I think this sort of event is really important because it provides an opportunity for individuals to express themselves openly in a safe community environment,” Goldsmith said. “Last May following the two deaths, there was much contention regarding appropriate ways of expressing grief and respect to those who had passed. I felt that due to this contention many community members never had the opportunity to fully experience and process their emotions related to the deaths. It is my hope that this memorial event will provide an opportunity for community members to re-approach those feelings in a safe and supportive environment so that those emotions can be fully experienced and emotional healing can occur.”