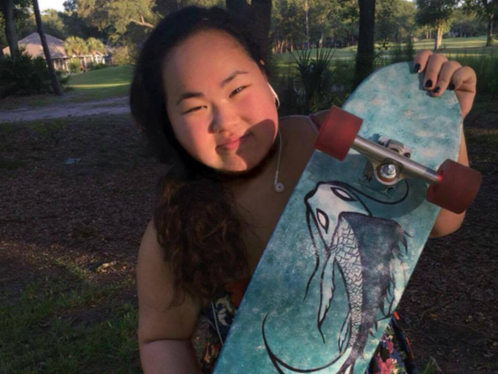 Third-year General Studies student and new Chief of Staff Olivia Van Housen is a fresh face in the New College Student Association (NCSA), yet many students may be familiar with her from such roles as the co-President of Animal Interest Club, or looking dapper in front of the Florida Capitol in the latest issue of the New College Nimbus. She spoke with the Catalyst to share about her approach to her new position, as well as what the community can expect from her in the coming months.

“I saw the position was opening and I felt that it would be cool for me to be an actual part of the NCSA, because I’m interested in government, and I hadn’t been involved in a role in student government before, so it was something that interested me,” Van Housen said. “I saw the position as a way to gain experience and help the student body, and the position is a helpful position for keeping things on track, doing things that I was comfortable doing.”

Van Housen’s previous positions include serving as co-President of Animal Interest Club with fellow third-year Codee Vogler and as a Resident Advisor (RA) during the fall semester of her second year.

As Chief of Staff, Van Housen serves as the chief administrator of the Executive Cabinet and assists Co-Presidents Paul Loriston and Miles Iton with anything they need. She is the second Chief of Staff to serve under their presidency, after deciding not to apply at the start of the term due to studying off-campus as part of the Semester in Tallahassee program.

“I had been off-campus in the spring, previously, and because I had been off-campus, I felt that some of the dynamics and New College itself could have changed in some way and I didn’t want to come in as someone who had been away for an entire semester, into a situation that could have possibly changed a great deal,” Van Housen said. “So I felt that it would be better for someone who was part of New College’s growth while I was away to take the position.”

After easing back into the campus climate during the first half of the semester, Van Housen has hit the ground running with her new role within the NCSA and looks forward to working with many people on campus to help the NCF community.

“I’ve been pushed to talk to people I wouldn’t necessarily talk to, and form relationships with people I might not have without being in the position that I am, just because I don’t really get out much,” Van Housen said. “I’m working with the security officers, talking with them, talking with the library staff, other members of the NCSA cabinet, talking with all of the TAs [Teaching Assistants].”

Going forward, Van Housen hopes to continue reaching out to students, hearing their concerns and gauging what projects would be most helpful to the community, while also encouraging more interaction between the NCSA and the student body.

“I like hearing other students’ ideas for changes they would make to the school, or projects ideas that they have, just in general, and seeing how feasible the ideas are, and try to help them get those ideas implemented,” Van Housen said. “I am trying to get people involved, and encourage them to change the things that they see as problems.”

Van Housen also promised to get a head start on such responsibilities as working with staff to set up late night library hours for upcoming finals, after scheduling issues during midterms resulted in multiple late nights at the library being canceled.

More information on campus issues and events will be provided via email as they come. Van Housen also has office hours Fridays 12 to 2 p.m. where students are welcome to ask any questions with answers that are not online.

“I know I send a lot of emails, but I try to make them important, since there are things that some students really need, they might not pertain to everybody, but they might pertain to someone, that’s why I send them out,” she said. “I’m both trying to be involved with the growing of New College and the changes that are coming to New College, and trying to understand those.”