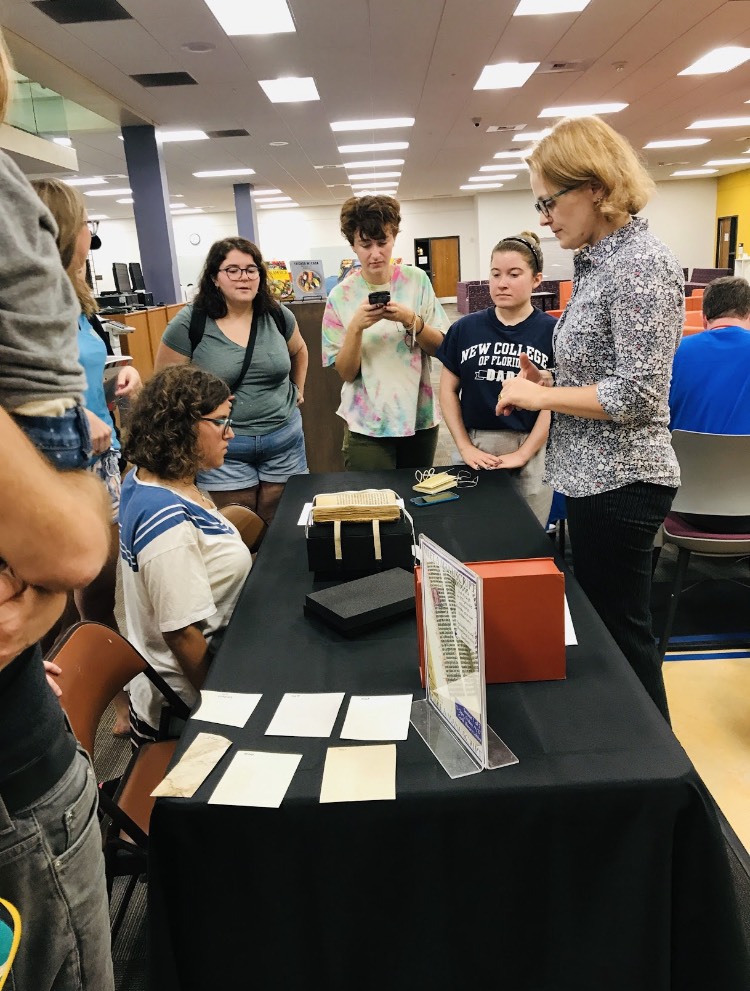 Sometimes, older history can seem distant and out of reach and it can be difficult to contextualize human existence beyond a few decades. Historical artifacts can help with the disconnection by allowing historians to bridge the gap between time periods. This fall, Professor of Medieval and Renaissance History Carrie Beneš offered the course Introduction to Manuscripts that allows students to do just that.

“Manuscripts are something that has been a passion of mine for a long time,” Beneš explained. “[Introduction to Manuscripts] is a course that tries to combine the history of writing culture with with more practical considerations of what these objects look like and how we talk about them.”

Beneš explained that New College does not own many manuscripts, so she was able to collaborate with the Paris-based program Manuscripts in the Curriculum that archives valuable manuscripts and loans them to institutions.

Through this program, Beneš was able to borrow ten Medieval manuscripts, one of which is a German copy of the Book of Psalms, which was shown at the first Meet a Manuscript that was held in the library on Friday, Sept. 28. This particular manuscript was created circa 1240-1260 and remained in Germany through the fifteenth century.

“The main idea [behind the Meet a Manuscript event] was to bring the manuscripts out and let people get their noses right up close to it and turn the pages and feel the parchment,” Beneš stated.  “Our other goal was to get people to try calligraphy and book-making.”

Two more events like this one will be held in November and December. Exact dates will be announced.

Medieval history thesis student Emily Lovett is a student in the Introduction to Manuscripts class.

“I was really drawn to the opportunity to work with material history, not just in the general sense of studying books and their production, but having the opportunity to physically handle medieval manuscripts and apply what we learn about historical context and trends to the manuscripts,” Lovett said. “One big reason that I like studying manuscripts is that it humanizes history. You can see where a scribe misspelled a word and had to squeeze the letter in or where a scribe got bored and started doodling in the margins.”

“You can still see the ruling on the pages, the prickings along the edges of the parchment, and other things like that which clearly indicate how the manuscript was made,” Lovett said.

Beneš also discussed the humanization of history in the manuscripts course.

“That’s one of the really great things about this class in particular because of its focus on material culture,” Beneš explained. “They’re physical objects and things that you can see and feel.  The thing about manuscripts is that every manuscript is different. Every manuscript was a deliberate choice by a person to commit these resources to write down a specific text.”

The more personal manuscripts were often handed down through generations and listed among luxury possessions or pawned.  Each manuscript was unique and sometimes even contained mistakes made by scribes.

“I was showing my students a manuscript a couple weeks ago that had doodles and marginal annotations on a page that was half blank,” Beneš recalled. “These annotations were in such a shaky and ill-formed hand and I said, ‘Look at this. I bet this is a kid.’”

Information for this article was gathered from lesenenluminures.com.