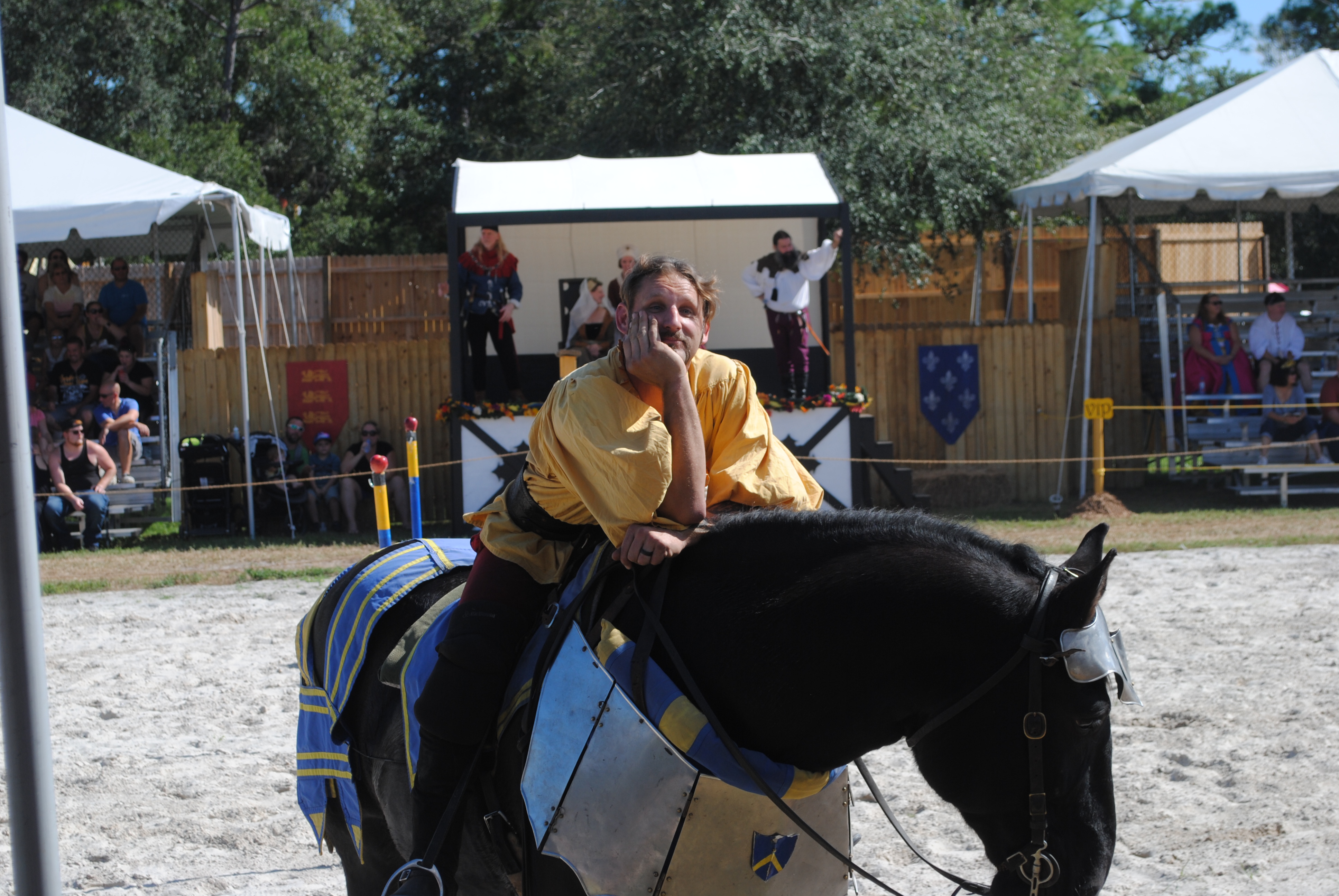 Horseman lounging on his horse at the jousting tournament.

All photos courtesy of Claire Newberg

“The year is 1428 AD,” the fair’s website states. “The Hundred Years’ War has devastated the once-beautiful landscape and vibrant economy of France. Word has spread that a mere peasant girl has received divine visions of the Archangel Michael instructing her to support the rightful King of France, Charles VII, and to help recover the true lands of France from the scorned English occupiers.”

The fair provides a family-friendly experience while still having events for an older crowd, such as the pub crawl. The first weekend featured an Irish dancing troupe, jousting matches and a humorous witch trial. The second weekend will feature a fire-eater, pipe musicians and acrobats. The third weekend will feature a dancing show centered around Sirens, a juggling show and a thrilling act called the Wheel of Death. The final weekend will feature a medieval Father Christmas, a jester and a clown show.

Besides the obligatory jousting tournaments, the main attraction of the Medieval Fair is the Wheel of Death. The mind behind the famous wheel of death is Ichabod Wainwright, a life-long circus performer who specializes in knife-throwing, acrobatics and other circus activities in his wheel. Wainwright has been performing on the Wheel of Death for almost eight years. The wheel stands at an impressive thirty feet tall and Wainwright built it himself.

Wainwright comes from a family of circus performers and grew up working mostly with circus animals, such as horses and elephants, but developed an interest in acrobatics as he grew older.

“When I was about sixteen, I started training myself in hand-balancing because I thought that was really cool and I thought handstands were a great way to stay in shape,” he elaborated.  “[Handstands are] a very difficult thing to get good at and it requires a lifetime to become a real hand-balancer. I wasn’t going to dedicate to that.”

Wainwright begins his Wheel of Death act by juggling axes that are on fire and balancing on a chair. He then moves onto the wheel, bringing elements of acrobatics to that part of the show.

“I learned how to do most of the tricks I do for my Wheel of Death show and leveled-off there, so I have a balancing act, but I am not a formally-trained acrobat,” Wainwright explained.

For most of his act, Wainwright remains silent, a bit like a mime, gesturing to the crowd. This adds to the overall comedic effect of the show and distracts from the danger of his act. It is no surprise that the Wheel of Death is one of the bigger attractions.

The giant jousting field sits just a bit further from Wainwright’s stage. During the tournament, the audience can expect nothing less than excitement and humor as the knights squabble amongst themselves. Each side of the stadium is assigned a knight to cheer for.  The jousting match is theatrical in the level of audience participation, with each side cheering the names of their assigned knights and booing the opponent as he rides by.

The tournament on Nov. 9 featured Sir WIlliam and Sir Jacob. The two knights and their squires had a light-hearted row as half of the crowd chanted “Jacob! Jacob!” and the other half chanted “William!” In the end, Sir Jacob won as Sir William collapsed on the ground feigning unconsciousness.

The fair runs through Dec. 1. Student admission is $16.95 with presentation of a valid college ID, and regular admission is $18.95. For more information, go to the fair’s website at sarasotamedievalfair.com or call them at 1 (888) 303-3247. Follow Ichabod Wainwright on Instagram at @thewheelwalker.