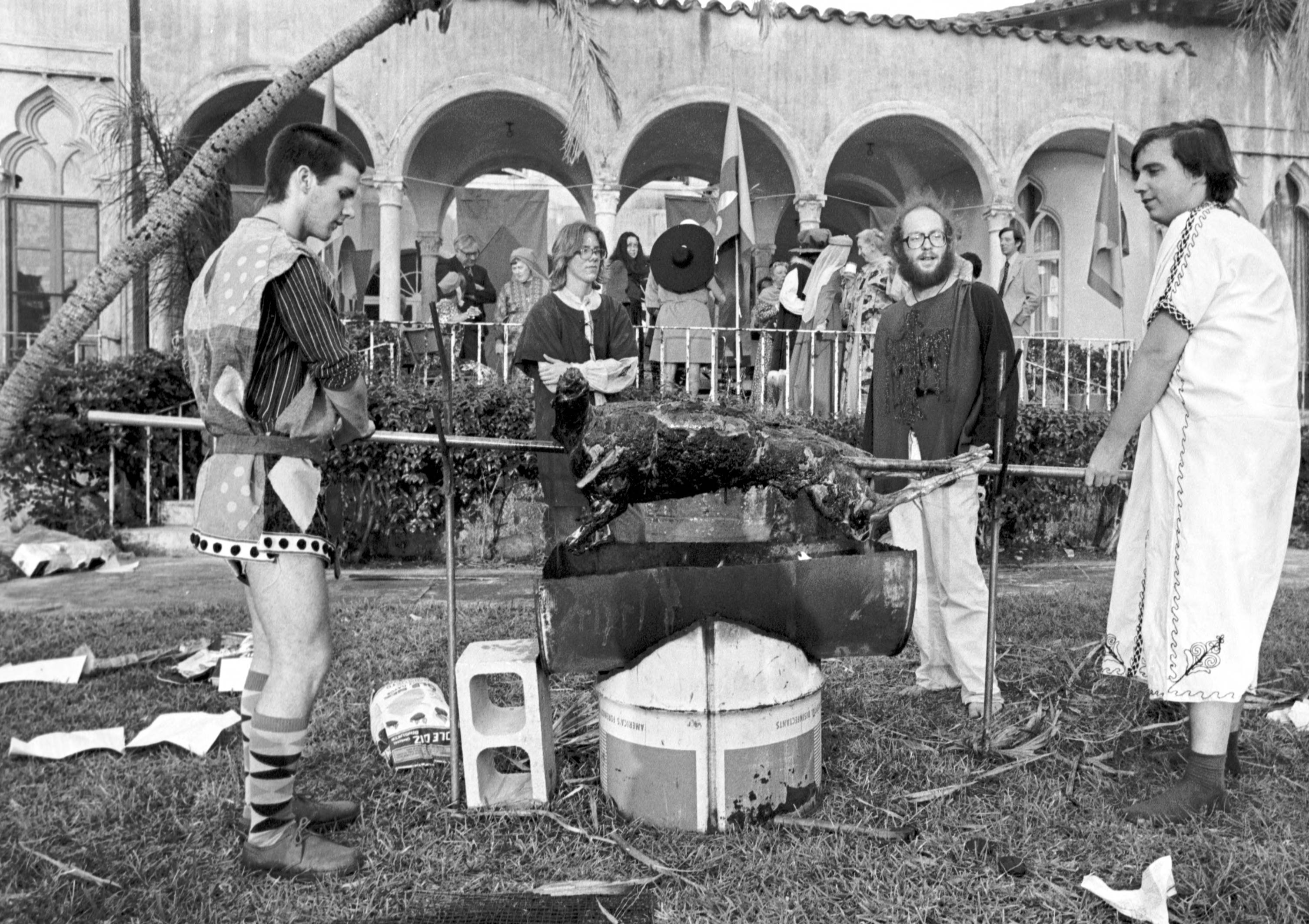 The words “medieval studies” may conjure images of stuffy old men clad in wool, smoking pipes, polishing pocket watches and debating the ecclesiastical reforms of Pope Gregory VII. However, nothing could be further from the truth, and on Mar. 8-10 New College will open its doors to a talented set of medieval and Renaissance scholars with interests from faeries to fratricide. 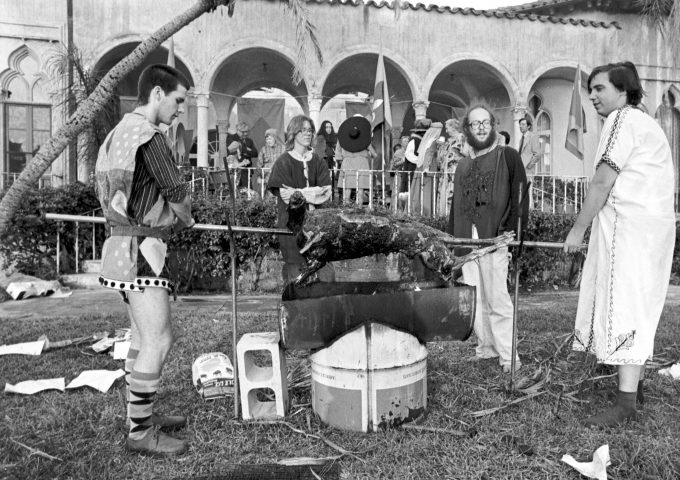 For many years the conference included a medieval fair, which concluded with a banquet. Here, fair participants circa 1977 prepare a pit roast. (Courtesy of Manatee County Public Library Digital Collections)

I’m a thesis student studying 20th-century American cultural and gender history. My area of interest is about as far away as one can get from the so-called Dark Ages–at least in a strictly chronological sense. I’m ashamed to admit that I’ve never attended the New College Conference on Medieval & Renaissance Studies (NCCMRS). With that said, I wanted to update myself on the state of the field and talk to the people working to expand the frontiers of historical inquiry. The conference is interdisciplinary, and this year’s program shows a range of topics including literature, art history and gender studies. I cast a wide net and spoke with many of the scholars who will be making an appearance at the conference. But first, a bit of history.

The NCCMRS is a longstanding institution at New College. Organized in the mid 1970s by the late Professor Emeritus of History, Lee Snyder, the conference originally had a markedly different character: the academic conference was accompanied by a medieval fair. According to a schedule from the New College-Ringling Museum Medieval Fair, a visitor could be culturally enriched by novel research on the Black Death and then catch a jousting tournament, all in the same hour. Other attractions included an archery contest and performances by jesters, magicians and acrobats. There were groups that performed medieval dances, music, quarterstaff tournaments–and it was all topped off by a themed banquet.

The NCCMRS’s past highlights a thought-provoking divide between popular and academic understandings of medieval and Renaissance history. Many of the scholars I spoke to expressed a feeling that the era is often typecast in popular culture and robbed of its nuance. Likewise, popular depictions of medieval and Renaissance culture are overwhelmingly centered on Western and Southern Europe, ignoring the complex cultural and political histories of Asia and the Arab world. Sherif Abdelkarim, an Ph.D candidate at the University of Virginia, told me he is presenting a paper at this year’s NCCMRS because he feels he has research worth sharing. 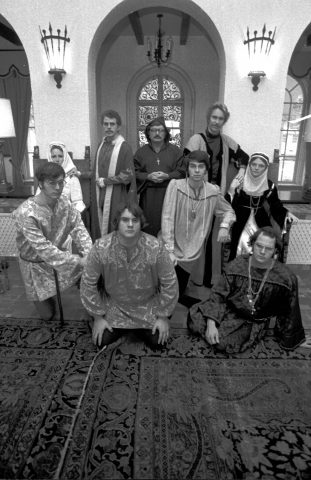 Abdelkarim’s passion for the pursuit of knowledge comes through in the tone of his voice. Measured and steady, it reminded me of the kind of academic writing that can pull a seemingly inscrutable idea from lofty heights and make it clear to the non-expert. I spoke with Abdelkarim about the stereotypes and preconceptions that plague medieval and Renaissance studies.

“Medieval history is stigmatized as the ‘Dark Ages,’ but our present society is predominantly based on medieval thoughts, insights and methods,” Abdelkarim said. “Pop culture might have something to do with it. It’s stereotyped as a period of neverending warfare, the crusades, unscientific methods and just general barbarism that you get from a lot of pop culture. It’s even in our idioms, right? ‘I’m gonna go medieval on this guy’ or ‘That’s so medieval.’ It conjures this association of pre-Enlightenment thought, that perhaps because they were not as technologically advanced, [medieval people were primitive.]

“There’s a lot of political science being written during this period,” Abdelkarim continued. “You have medical treatises being written on the plague, on how to actually deal with pandemics. Then there’s just a lot of really beautiful literature that really gets at what it is to be a human being.”

Abdelkarim is studying the character of the hypocrite in Old English, Middle English and medieval Arabic literature. His research highlights intriguing continuities between the medieval world and ours.

“What strikes me now about when [hypocrite] is used—politics comes to mind, or shady business practices—[is that] there’s a direct continuation between the character of the hypocrite in the medieval world and the character of the hypocrite as we conceive of him or her today,” Abdelkarim said. “It’s very modern, recognizable, there’s nothing foreign about it. The biggest misconception today is that the medieval world is foreign […] It’s strikingly similar to the types of conversations we’re having today, in terms of political hypocrisy, or the everyday masks we have to wear to present ourselves to the world.”

Angana Moitra, a doctoral student at the University of Kent, will also be presenting a paper at NCCMRS. Like Abdelkarim, Moitra feels strongly about the importance of understanding history.

“One is usually asked: why should we care about what happened thousands of years ago when there are more pressing matters at hand in the modern world?” Moitra said. “However, it has to be borne in mind that history does not occur in a vacuum. The events of the past have always had a bearing upon the present, and by studying them we can gain greater insight into the problems which plague us today as well as realise that, at its core, human beings have always grappled with the same things throughout the course of time.”

New College Professor of English Nova Myhill, who co-chairs the conference with Associate Professor of History Carrie Beneš, decided this year to bring a student intern on board to help organize the conference. The NCCMRS intern, thesis student Victoria Deal, studies the economic and financial history of Renaissance Italy.

“It’s gonna be awesome, we have a really interesting spread of people [this year],” Deal said. “We’re kind of a small, boutique conference, so we have a lot of people farming out cool and new ideas. It’s pretty friendly, I’ve definitely shown up to a panel barefoot.”

This year’s New College Conference on Medieval & Renaissance Studies will take place from Mar. 8-10 in the Sudakoff Conference Center. Information is available at NewCollegeConference.org. Attendance is free for all undergraduate students.