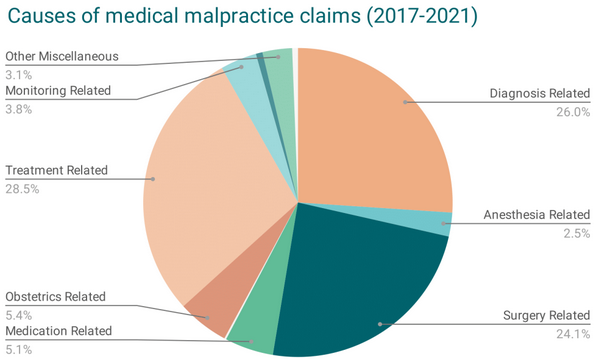 Chart of medical malpractice claims and their causes from 2017 through 2021. Photo taken from JustPoint.

The day has come. It was a hard decision, but the only choice you have is to amputate. All was well when you arrived at the hospital and surgery went smoothly—the only problem is you were sure it was your right leg, not your left.

A study done by John Hopkins has attributed over 250,000 deaths each year, making medical malpractice the third leading cause of death in America, following heart disease and cancer. It usually goes without saying that a medical professional can be trusted with the level of expertise and education they have under their belt, but the recent rise in medical malpractice cases calls this inherent trust into question.

Medical malpractice is defined as occurring, “when a hospital, doctor or other health care professional, through a negligent act or omission, causes an injury to a patient,” according to the American Board of Professional Liability Attorneys (ABPLA). “The negligence might be the result of errors in diagnosis, treatment, aftercare or health management.”

After combining and averaging the mortality rate of four separate studies, researchers attributed what they call a “lower limit”—the smallest possible number that could be factually attributed to the research—at a whopping 210,000 deaths associated with preventable harm and 400,000 deaths attributed to preventable premature death. While these accidents can result in death, more often than not the patient is instead left alive, but with lingering physical and mental scars.

Medical errors cost the United States $19.5 billion, about 87% of which was directly associated with additional medical costs to help to avoid such errors.

Carelessness is human nature, but in a field such as medical care extra precaution should be taken to avoid what often is a simple overview. Trust is waning between healthcare providers and Americans are looking for change. With malpractice rocketing to number three, people are looking now more than ever for someone they can look to for the care they need without having to worry about whether or not they’ll make it home.