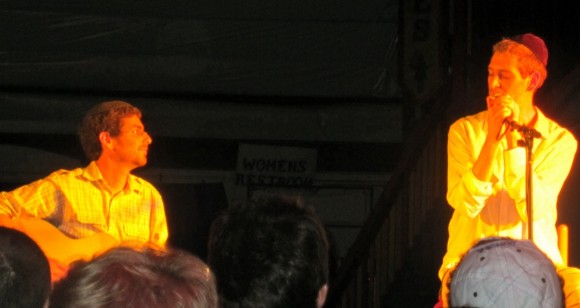 Matisyahu announced to his fans via Twitter in December 2011: “No more Chassidic reggae superstar. Sorry folks, all you get is me…no alias.” He noted that he was reclaiming himself from a life of strict religiosity. Although he shaved his signature Hassidic beard, he told his fans not to worry, “you haven’t seen the last of my facial hair.

Matisyahu, in all his beatboxing glory, was brought to the stage of the Sailor Circus Arena on Saturday, courtesy of the Jewish Federation of Sarasota-Manatee.

I’ve been a fan of him since around 2005, right when his single “King Without a Crown” emerged as a hit single. I’ve missed him every time he’s played in Florida over the past few years, so there was no way I would miss his Sarasota show. Plus, come on, Matisyahu – in Sarasota? Last big act we had was Dolly Parton and I couldn’t even afford to go. Sadly I missed every wave of free tickets that were offered to New College students, so I paid the $18 ticket price.

Matisyahu, which is the Hebrew and stage name of Matthew Paul Miller, 32, blends hip-hop, reggae and a uniquely spiritual perspective to create a style that is all his own. His Jewish background comes to the forefront in many of his songs, such as “Jerusalem,” “Exhalation” and “Ancient Lullaby.”

While I don’t personally identify with some of his more overtly religious, Zion-touting lyrics, I am a huge fan of any artist who writes lines such as “youth is the engine of the world” and “ slam your fist on the table and make your demands” – both from the song “Youth” off of the 2006 album Youth. However, I do enjoy his more rhetorical spiritual messages of rising up, survival and loving oneself.

Musically, the show was all there. I didn’t learn that the performance was acoustic until I arrived at the venue, but he proved to be hiding nothing but raw talent behind his more beat-laden songs. While this was no ordinary show, Matisyahu did not disappoint.

The artist, usually clad in regular street clothes, came on stage in a suit and tie and had one accompanying guitarist. He sang soulful renditions of older songs, and provided a preview of his new album, tentatively titled Warrior. Matisyahu noted that he wanted to change the title since he already has a song of the same name. He stopped his guitarist mid-melody to hear a suggestion yelled from the crowd – “Schvitzing Warrior” (“Sweating Warrior” for the Yiddish illiterate)! I think they were alluding to the ironically hellish temperature created by the herd of concertgoers in the poorly ventilated circus tent.

While it was an effort to drown out the annoying screams of “Play ‘King without a Crown’!” coming from some bros standing behind me and to ignore the middle schoolers complaining to each other about their moms texting them, I went into an almost trans-like state as Matisyahu went on a musical voyage, stringing multiple songs with beatboxing interludes. The longest of these journeys seemed close to 20 minutes.

Overall it was a great show. Though I would have loved to jump up and down on the bouncy acrobat floor of the arena, the slow pace of some of the songs helped me to hear and understand his lyrics more clearly.  He concluded his set with his 2009 hit “One Day,” a song that prophesizes a day when there’ll be “no more war … and our children will play.”