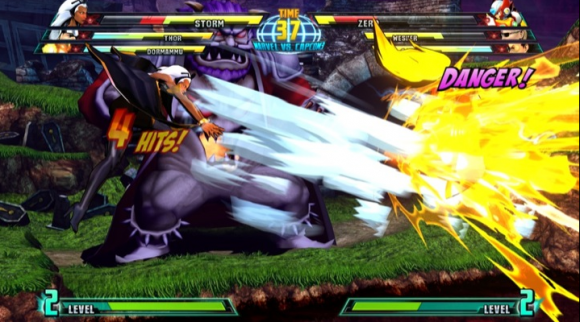 KABLAM! The game offers endless hours of mindless simulated violence for gamers. Players can button-mash it out with a variety of avatars, such as the grotesque Modok seen above.

After a decade of silence the popular Marvel versus Capcom franchise was revived on February 15th in its third installment: The Fate of Two Worlds.  The premise is simple: Albert Wesker, the main antagonist of the Resident Evil series, and Doctor Doom of Marvel fame have joined forces, merging together their respective dimensions in an attempt to rule both. Why this push for cross-dimensional world domination results in a string of three-on-three fighting tournaments is never really explained. The point of the Marvel versus Capcom series has always been to cram as many disparate characters onto one screen and, as is the case with any game in the fighting genre, they are here to K.O. — driven by an inexplicable bloodlust and their love of advanced martial arts. Ultimately, we don’t really need a narrative to justify Street Fighter’s Chun-li stopping Wolverine mid-Berserker claw with a giant blue ball of energy, slipping the play screen into a frenzy of lights, colors and ever-increasing damage counts. That’s why the game remembers to shout “Awesome” for you, just in case you are too absorbed in the display.

The mesmerizing spectacle has been the initial draw for fans of the series from the beginning. Always one to lunge for shiny things, my 11 year old self bee-lined for Marvel vs. Capcom II A New Age of Heroes when it hit arcades in the early 2000. Having no idea what each button did or who half the characters even were, it was enough to let the colors and sounds wash over me. At the time the rushed physicality of button mashing was enough to hook me into the game. I realized that the faster I tried the more likely I was to trigger a screen consuming energy blast. Absorbed by the ends but having no understanding of the means, it would take several years and the 2009 release of the game on Xbox for me to realize the depth of that shiny thing.

The Fate of Two Worlds retains the beloved aspects of the original. It combines glitz and accessibility but, with time, reveals layers of complexity that can satisfy even the most hardcore of gamers.

The preservation of this balance is a remarkable accomplishment in the era of 3rd generation consoles. Since complexly immersive worldscapes and dynamic characterization have been introduced to mainstream video gaming, the fighter genre has become vestigial. Its formula is the product of limited technology surpassed by game developers years ago. In The Fate of Two Worlds and games like it, players battle in a distinctly uninteractive and two-dimensional space. One can act only through various button combos. Most modern game development pushes to create more and more intricate and interactive environments using complex engines that imitate the physics and textures of the real world. Fighters do none of these things. They operate under an artificial constraint. Finding ways to innovate within this constraint is a challenge few have met.  Nintendo’s popular Super Smash Brothers franchise markedly does so by combining the fighter with the equally retro platforming genre. Characters still battle over a two dimensional backdrop but a varied vertical space and interactive environment allowed for more intricate gameplay. This innovation carved Smash Brothers a place in a gaming market that includes fewer and fewer traditional fighters. The Fate of Two Worlds works with a more traditional model than Nintendo’s franchise but arguably offers a more dynamic and complex experience.

The setup in which each player chooses three avatars with which to do battle, introduced in A New Age of Heroes, has been transfered over to the sequel. Also as before, it allows a player to bring a high level of personalized strategy to the game if he or she so chooses. Each fight is an opportunity to assemble your own dream team. Veteran players will figure out the strengths and weaknesses of each character and how they fit within their own playing style. Interchange between the characters is particularly important. While only one character can be controlled at a time during gameplay, players can switch between their team of three at any time to find the best match for your particular opponent. When one of your characters is ‘on-the-bench’ off-screen health slowly returns, making the switch-out an integral part of any strategy. Calling on off-screen characters for an assist move can help an offensive onslaught but also opens that character up to damage for a few precious moments. While these elements of the game may seem technically arbitrary, they are an important part of what sets this franchise from the rest of the selection.

However, as is the case with such games, strategy often gets thrown out the window as the player loses himself in the rhythm of air-combos and specials. The game encourages this kind of frenzy in players. The more quickly damage is inflicted the higher the power level of the character. When a character reaches the critical mass of level five, devastating special moves become available that can decide a match in an instant. Getting to this state can take equal parts skill and enthusiasm, but often it only takes copious amounts of the latter.  No matter how many hours of arcade play one clocks in it, it’s not rare to be outsmarted by someone fresh to the game who can see right through pet combinations of muscle memory.

Despite my clear infatuation with the game there are some aspects with which I’m less than satisfied. At only 36, the game has considerably less playable characters than its predecessor. It still has far more than the average fighter, but with a franchise that is almost defined by its excess of options, this drop off is a little disheartening.  Still, the characters they did include are beautifully realized and fans of their respective traditions will be pleased by the little details included. Deadpool saunters around the screen in a way that befits his wisecracking attitude and Chris Redfield uses many of the same weapons that appeared in 2010’s Resident Evil 5.

The game’s greatest shortcoming is the lack of plans for any arcade release. The game will only available on the Xbox 360 and the PS3. This is compounded by the clunkiness of its Xbox live interface. Consumers across the board bemoan the inability to peek in at friend’s matches and crashes have been widely reported. Of course, this change is representative more so of a development in how people are playing videogames than the quality of this particular title. As users have gone from punching buttons in an arcade hall to punching it out over an Internet connection, the way games are designed and sold has had to adapt to survive. But the fact remains that otherwise excellent titles like this will forevermore be marred by the death of the arcade. In a fighter game, driven by user-user interaction, the lack of a sleek social space to play outside the living room is disappointing.

But these minor shortcomings don’t ruin the big picture. Overall, The Fate of Two Worlds is an excellent game and one of the best fighters to have come out in years. Novice users will be pulled in by the comic book aesthetic and simple combos, while diehard fans of the genre and franchise won’t be disappointed as they peel back more and more layers of the interface. For that, it earns a strong sat.