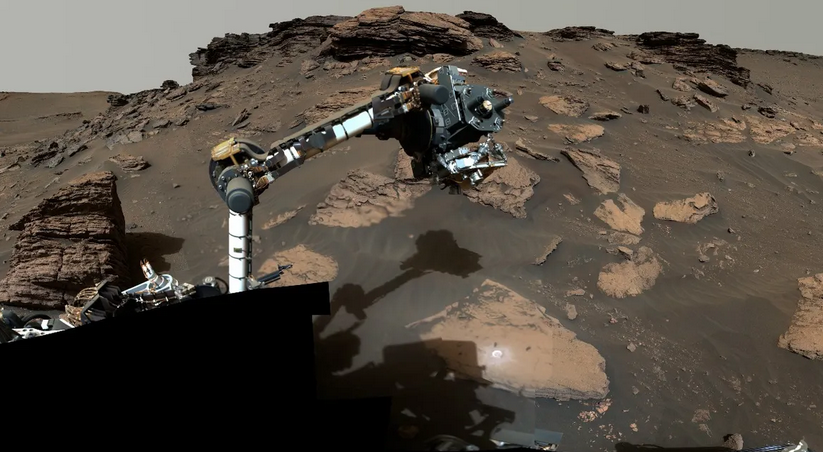 A photo of the Perseverance rover examining a sample. Photo taken from CNET.

NASA’s Perseverance Rover has found organic matter in rocks on Mars after just a year and a half on the planet. NASA held a press briefing on Thursday, Sept. 15 to discuss.

Perseverance, nicknamed Percy, found the matter within an ancient river delta in the Jezero Crater. The sedimentary rock which the samples were taken likely formed billions of years ago from mud and sand settling in a salt lake as it evaporated.  Analysis of the material indicates a high composition of what correlates to sulfate molecules. Percy collected two samples from this rock nicknamed “Wildcat Ridge,” and the organic molecules found within are considered a potential biosignature by NASA, which will assist in cataloging the history of the lake which it formed.

Organic molecules are defined by a wide variety of compounds, usually made primarily of carbon and including hydrogen and oxygen atoms as well. They can contain other elements like nitrogen, phosphorus and sulfur. These compounds are usually considered the building blocks of life, and although they can appear without life—it’s worth further investigating to find out if there is life. The presence of these molecules is considered a potential biosignature.

In 2013, NASA’s Curiosity rover also found evidence of organic matter and Percy has found organic compounds in Jerezo Crater before. This discovery is unique, however, because the sediments were deposited in a lake under conditioner in which life could have existed. This is also the most abundant organic detection on the mission to date.

Percy’s primary mission is to collect samples that may contain signs of ancient microbial life.