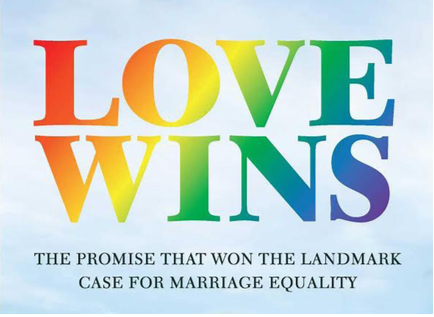 Since 2015, Jim Obergefell has become the face of the recent wave of the LGBTQ+ rights movement. His fight for gay rights reached its climax when he was the plaintiff in the landmark Supreme Court case, Obergefell v. Hodges, where he claimed that state officials violated his Fourteenth Amendment rights by denying same-sex couples the right to marry.

Obergefell and his husband, John Arthur, were together for two decades when they decided to get married in Maryland in 2013 when the state legalized same-sex marriage. Arthur passed away soon after their union, and Obergefell fought for legal recognition as his surviving spouse on Arthur’s Ohio state death certificate.

Obergefell’s fight made it all the way to the Supreme Court. In the resulting historic decision, the Court ruled that the Constitution supported same-sex marriage for the entirety of the United States and established the legal right of same-sex couples to marry.

After his role in winning marriage equality for Americans, Obergefell has been on the road, touring across America to energize tides of passionate LGBTQ+ activists by sharing his story. All across the nation he has been received as an iconic hero for social equality.

Next week, on Oct. 26, 2016 Jim Obergefell will visit New College of Florida “to tell the story of his taking the case to the Supreme Court and winning federal same-sex marriage rights,” according to the New College Gender Studies program Facebook page.

Obergefell’s talk is part of New College New Topics, a lecture series focused on contemporary issues. The conversation will take place at the Mildred Sainer Pavillion at 5:30 p.m. The lecture is free and open to the public, but seating is limited and reservations are recommended.

The discussion will be followed by a cocktail reception in the Isermann Gallery celebrating Obergefell’s commitment to the fight for LGBTQ+ equality. Tickets to the reception cost $125, which includes a signed copy of Obergefell’s book, Love Wins: The Lovers and Lawyers Who Fought the Landmark Case for Marriage Equality. All proceeds will benefit New College’s Gender Studies Program.

Obergefell’s work fighting for LGBTQ+ rights is far from over. He is actively lobbying in Washington D.C. for the Equality Act, an update to the 1964 Civil Rights Act to ban discrimination based on sexual orientation and gender orientation.

Obergefell is also continuing to fight for a ban on conversion therapy, a controversial form of counseling aimed at changing a person’s sexual orientation from homosexual to heterosexual. “No child should be forced into therapy that has been debunked and disproved and is a form of child abuse. We’re seeing movements in the right direction when it comes to that because medical professionals, they all say it’s harmful,” said Obergefell in an interview with Sarasota Magazine.

After the announcement of the Supreme Court decision recognizing same-sex marriage, Obergefell addressed a crowd outside of the Courthouse saying, “If we’re truly dedicated to our democracy and the values that we as a nation cherish, we must be equally committed to ensuring that all citizens are treated equally, that all Americans deserve justice. That’s when we’re all united.”

To reserve a seat for the free New Topics New College lecture and/or the following cocktail reception, visit donate.ncf.edu.