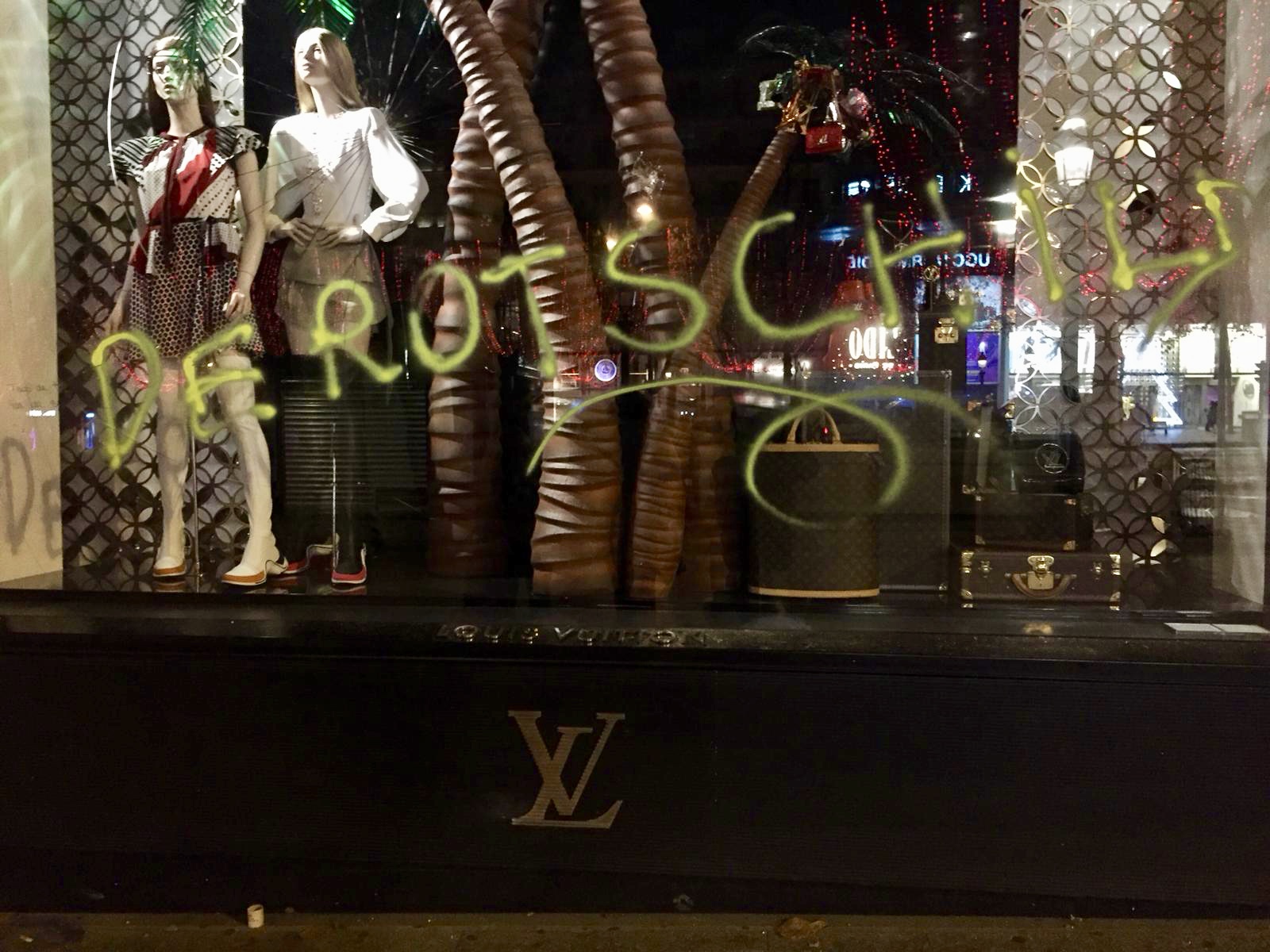 photo courtesy of Victoria Cheng The word "Rothschild" tagged on the Louis Vuitton store is a direct reference to Macron's work with the financial group, as well as a criticism of the elite classes, luxury brands and the cost of living in France.

Thousands of demonstrators organized in streets and highways throughout France over the weekend to protest proposed tax hikes on gas. The activists are organized under the Gilet Jaune, or “Yellow Vest,” movement, a name which references the fluorescent yellow safety vests that French drivers must carry in their vehicles in case of roadside emergencies. Despite offering sympathy for the protesters, French President Emmanuel Macron stood firm on the decision to increase taxes.

The demonstrations started in early November to express severe discontent for planned tax hikes. Since Nov. 17, hundreds of thousands of protesters have blocked highways across the country by setting up barricades and deploying convoys of slow-moving trucks. One protestor, 63-year-old Chantal Mazet, was ran over and killed by a mother trying to take her child to the doctor. Demonstrators in the streets of Paris threw bricks and bottles at police, who responded with water cannons and tear gas.

Macron says the taxes will help reduce France’s dependence on fossil fuels. By raising the cost of diesel, the government hopes to convince more people to purchase vehicles that are not powered by fossil fuels.

These proposed changes are particularly serious for the working-class people who live outside of France’s large cities.

“There are two Frances: There are the better off people who live in the cities who can afford to think about climate change, and then those living in the rural areas and small towns, a lot of blue collar workers, [who] can’t make ends meet,” NPR’s Eleanor Beardsley reported from Paris.

“And this is where the movement came from,” Beardsley added. “It rose up from the French heartland.”

Despite the movement’s grassroots beginnings, an Odoxa survey conducted for Le Figaro and Franceinfo showed that 77 percent of French people find their demonstrations legitimate.

The national attention that the protests have gained has opened the door to wider criticism of Macron’s presidency, his attempts at economic reform and discontent with the high cost of living in France.

The movement has united retirees, the unemployed, farmers, housewives and people who have never protested before through a common anger at the government, as well as disapproval for Macron in particular. A second survey by pollster BVA showed that only 26 percent of French people have a favorable opinion of Macron.

He is believed to be out of touch with the majority of French society and is often criticized for prioritizing money and the economy over social concerns. During the election, he was portrayed as a “candidate of finance,” primarily because of his former career as an investment banker with the elite Rothschild & Co.

“I sympathise with my fellow citizens,” Macron said in a national speech on Nov. 27, “but I will not give in to violence. You cannot be pro-environment on Monday and then when Tuesday comes be against rising fuel prices.”

Referencing decades of French policy that encouraged citizens to move farther from cities and travel by road, Macron said:

“We pushed them into this situation. They are the victims of this situation, they have not created it. We should listen to the social alarm and protests, but there is also an environmental alarm.”

Macron made it clear that the fuel hike isn’t going away, but promised to take steps to help the working class. The government is also offering financial incentives to help people switch to more eco-friendly cars, such as ensuring automakers fund new car trade-in payments. But the demonstrations are a definite blow to his presidency and show the disconnect between Macron and society.

As New York Times opinion writer Agnès C. Poirier said: “[H]e must do more to acknowledge the deep anxiety expressed by the Yellow Vests. He has to behave as if he has not only seen but also heard them.”

Information for this article was gathered from npr.org, nytimes.com, bbc.com and lemonde.fr.