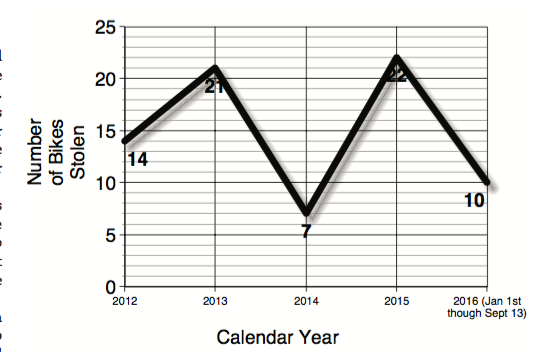 In the 2016 calendar year up until September there have been ten bike thefts on the New College Campus. This is in comparison to twenty-two bike thefts in 2015. In the 2016-2017 school year yet, students and campus police, are making efforts to stop that number from growing.

“Make your property, whether it’s your bike, or anything, make yours more undesirable to take, or more difficult to take,” Interterm Lieutenant Chris Rivett of the campus police for New College and USF Sarasota-Manatee said.

“That being said, if you have a car, and you have stuff in the car keep it locked, if your car door is locked and the other person’s isn’t and someone does come on campus that we [New College and USF police] don’t identify right away as being a suspicious person, and they’re gonna’ go through vehicles obviously they’re going to go for the unlocked vehicles first. It doesn’t make any noise it’s easy to get in and out of, it doesn’t draw as much attention.

“But with bikes, you have to use a lock that’s always better,” Rivett continued.

According to the Federal Beauru of Investigation (FBI)’s Uniform Crime Reporting Database (UCR) larceny theft, which includes bike and laptop theft are is among the most common crimes reported on college campuses. While New College doesn’t seem to have a problem with laptop theft, there seems to be a trend among bike thefts. Despite the fact that New College is a relatively safe campus, and a high ratio of police to students.

The feeling of relative safety here has led some students o feel safe letting others use their property and not worrying about it.

“We all know each other and trust each other so I, along with everyone else who shares the lounge, have always just parked our bikes, unlocked, inside of our lounge. Later when I walked into my lounge, my bike wasn’t there. Sometimes a friend borrows my bike so I just didn’t think too much of it and drove to Caples … Later that same night I started asking around about the location of my bike. The friends who I thought might have borrowed it did not borrow it,” Second year Jason D’Amours said in an email interview.

“I completely dismissed the idea that it might’ve been stolen straight out of our fairly private lounge. I couldn’t even fathom the idea that another New College student would steal my bike. It was really concerning for a bit to think that that might’ve been the case. I thought that we all respect each other here, and also it would be a pretty stupid idea to steal another student’s bike. We go to a small school. Someone would spot it eventually.”

“I ended up finding it. A friend borrowed it thinking it was another friends bike. My bike spent the night locked up behind BON House that night, I guess.” D’Amours continued.

“Sometimes a bike is borrowed by a student, and it ends up getting borrowed and they forget that they even loaned it out, or it gets moved from place to place because they’re not locked up. That happens but it’s very rare,” Police Chief Kessie said.

But, that is not always the case, such as that of Catalyst Staff Writer, and thesis-student Katelyn “Kat” Grimmett.

“At least for me, this campus feels really safe compared to where I come from at least, so I think I got a little too comfy and lost my instincts, my protective instincts, but never lose those, always lock your bike. That’s what I have to say,” Grimmett said.

While, New College according to the UCR has a larger percentage of police per student then most other state schools which can help contribute to this feeling of safety that some students feel, they can’t catch them all. So, despite feeling safe students should remain vigilant be careful with their property in the face of unpredictable outside forces that are likely to burst the safety bubble that New College students have created and remember to take precautions to protect their property.

“See, I’m not even so much mad at the situation as I am mad at myself because I left it right in front of my room on the first floor of Dort, unprotected, and unloved and that’s why it happened, really,” Grimmett said.

In an attempt to solve this problem, the New College Student Alliance (NCSA) provides locks for students though a bike lock program where Dawnn Shongood the NCSA administrator will buy locks which will be distributed by the New College Police for free to students to be turned in at the end of the year. These are quality locks that often have to be cut off by Physical Plant in the event of a lost key or other circumstances in which the lock would need to be removed.

“They’re tough to get off, we sometimes have to cut locks off the bikes, a student will say, ‘Oh I lost my key, or I can’t get it off’ well, physical plant won’t do it without us being there, or okaying it but once we do it, then they’ll cut the lock off.” Chief of Police Michael Kessie said.

“The regular, the old fashion chain locks, that are just like links we’ve had people come up here, and the ones with the small cables, we’ve had people before, what we’ve seen on video where what they have done is at for example the library, and we can see that what someone has done is had like a pair of cable cutters and just snapped it, and they’re in and out but those big locks that they have right now at the bike program are a lot more difficult, even when Physical Plant has to cut them off it takes him a little bit of time to get them off.” Interterm Lieutenant Rivett said.

If a bike is stolen, a student can go to the Campus Police Department (Cop Shop) to report this robbery, and if the bike was registered, there is still a chance that it will be found.

“Because what happens with these bikes is somebody either is riding it, it it’s sold to ten different people for drugs or for transportation before it ends up going to a pawn shop so the pan shop might be six months from now so or a year so we constantly are checking. So we do a lot to try to get the bikes back. The pawn shop has to hold anything that’s pawned at least for thirty days so that gives us time within that thirty days, and we run the serial number at least three times within that thirty days,” Kessie continued.

Students whose bikes have been stolen can also check the local Sarasota Craiglist for their bike, although it is unlikely that the bike will appear there, or call around to local bike shops if they know the serial number of their stolen bike and ask if the bike has shown up in the shops for a repair.

Even if the bike is not registered the police will still take a report and make efforts to find the bike so if a bike is stolen a student should not be afraid to report their bike stolen and can contact the Cop Shop either through email at police@ncf.edu  or phone, (941) 487-4210.

Because, as Chief Kessie said, “Even one bike being stolen is too many.”