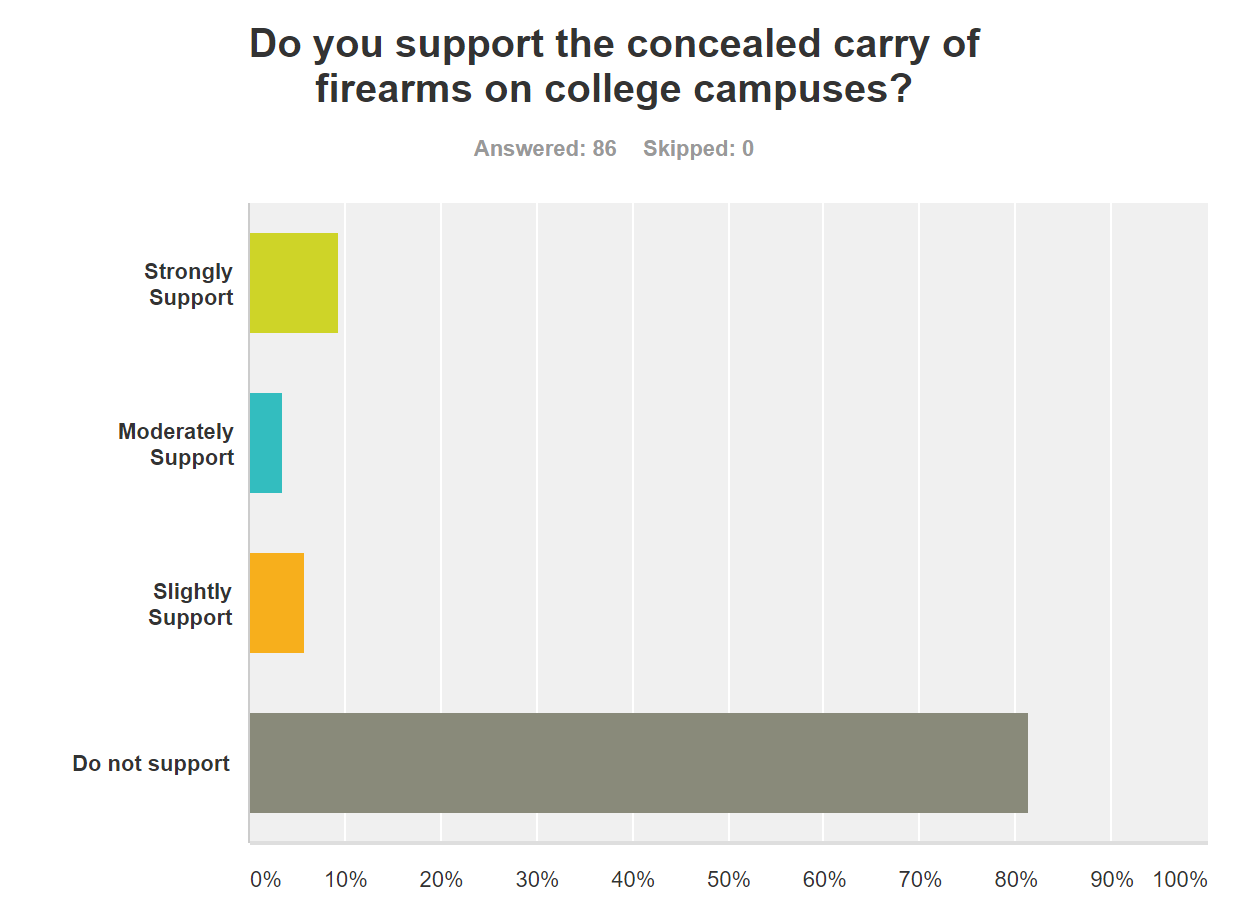 Florida State Senator Greg Steube, R-Sarasota, known on campus for his win against Professor of Political Science, Frank Alcock, last November, has introduced a slew of gun-related bills that would reduce penalties or expand freedoms for firearm carriers in Florida. The current session of the Florida Legislature began March 1, and Steube has already introduced 10 gun-related bills as of the time this issue went to print.

Initially presented as an omnibus bill, Steube split the different provisions proposed regarding handguns in Florida into a number of bills, which may give them more traction in the legislature.

“Nothing’s going to sail through the Senate,” Alcock said. “It’s his signature issue. He is one of the more prolific filers as a freshman. It doesn’t surprise me. Part of what he is doing at the moment is trying to increase his name recognition and his brand.”

When asked what he would do differently if he were in Steube’s position, Alcock did not pause to search for his answer: “Everything.”

Steube’s proposals strike through a number of provisions in the list of places where licensed concealed carriers of firearms currently may not bring their weapon.

On Feb. 14, Senate Judiciary Chairman Steube was denied entry to the Sarasota County Clerk of Court for being in possession of a concealed firearm. Steube brought this to the attention of Sarasota County Sheriff Tom Knight, whose legal counsel determined that the Clerk of Court is not considered a gun-free zone under state law.

The initial restriction was enforced due to the Clerk of Court’s status as a historic courthouse, despite few hearings being held in the building’s courtroom. Following the incident, the Sheriff removed its security officers from the Clerk of Court, under the recommendation of counsel.

This action precipitated a constitutional crisis in Sarasota when Chief Judge Charles Williams ordered Knight to return deputies to their former positions in the Clerk of Court. Knight responded that this would “[encroach] upon the second and fourth Amendment rights of citizens and [expose] myself, and most importantly my deputies, to personal liability.”

Deputies could be sued individually for stopping a person with a concealed weapon.

Shortly after the debacle with the Sarasota County Sheriff, Steube introduced a bill which would allow concealed handguns into state and municipal courthouses if the carrier follows policies and surrenders the firearm to courthouse security upon entry (SB 616).

Steube’s first bill, SB 140, amended prior legislature referring to the locations into which a person with a valid concealed carry permit may not take a firearm. These currently include courtrooms, police stations, airport terminals, detention facilities, polling places, meetings of governing bodies, and schools and colleges.

The Senator split this omnibus legislation into a number of bills that may be easier to pass separately than together. These redact the restrictions on concealed carrying into legislative meetings (SB 620), local government meetings (SB 626), career centers (SB 640), airport terminals (SB 618) and elementary and secondary schools and college campuses (SB 622). SB 644 allows for open carrying of handguns according to all laws surrounding concealed carrying.

If that seems like a lot, it’s because it is. Let’s continue.

SB 646 reduces penalties for those who temporarily display their firearm in public, and allows members of the Florida Cabinet to carry a concealed weapon if they do not have full-time security. Finally, under SB 610, private businesses who choose to prohibit a licensed person from carrying a weapon on their property would be liable for any injury, death, or loss the licensee incurs while on the premises.

“If a private business wants to ban guns, it’s OK to do so,” Steube told the Miami Herald. “But if you’re going to do it, in my opinion, I must assume that I’m going to be protected because they’re taking away the possibility of me defending myself.”

SB 622, to New College students and staff, is easily the most contentious gun bill that Steube has presented. The permittance of concealed weapons on college campuses throughout Florida would require an evaluation of policies and procedures from administration, campus police, residential life and faculty.

Still, many question whether the increased safety in an active shooter situation (which is why Steube and other pro-gun legislators say weapons should be allowed on college campuses) is actually necessary or more safe.

“That’s an objective fallacy,” first-year Sophie Ledden said. “The fact is it’s not going to be trained people in an active shooter situation anyway.”

“There’s no data to support that gun-free zones are a magnet for killing,” Alcock said. “College campuses tend to have less violent crime than other space.”

“For better or worse, a campus environment is more closely controlled than the world at large, therefore, it is less likely that an individual would need or seek to acquire a gun for ‘self defense’ purposes,” first-year Aiden Juge said in an email.

Third-year and Police Liaison for the New College Student Alliance (NCSA), Dominic Theofan, said he would feel less safe if he had to share a classroom with someone carrying a firearm.

“The perceived sense of safety that one individual would have from a concealed carry would compromise the safety of everyone,” Theofan wrote in an email. “History dictates that the potential for an individual to become a ‘hero’ in one instance is not worth the risk of injury or death from potential misuse that comes from having firearms on campus.”

If Steube’s campus carry bill were to pass and become state law, New College would face a disconnect between following state law and assuaging the fears of students on campus.

Particularly on a residential campus, the idea of not carrying, but storing, poses a potential risk to students living in proximity to someone who wants to exercise their second amendment right.

“We would comply with the law,” Alcock said. “Life moves on, but I think people would be less comfortable here. It does have a chilling effect on what we do on campus, even if there’s not an incident.”

First-year Ledden hopes that New College would ban concealed weapons on campus, if the bill were to become law.

“There’s no good reason to have a gun at a school,” Ledden said. “Even if they weren’t used, it’s the attitude that having a gun at school comes from. The idea that violence is the solution. There’s also this paranoia that almost always accompanies this. The sort of mindset that that is a part of, is what makes me feel uncomfortable.”

Although on our public campus, fully prohibiting concealed weapons under the proposed legislation would be difficult, the administration would likely have some authority to create campus-specific policies regulating the carry and storage of firearms.

“I would hope that the administration would be free to enact policies such as restricting gun owners to single-occupancy dorm rooms and requiring guns to be kept under lock and key when not on the permitted individuals person,” Juge said. “I would also hope that the administration would, given the opportunity, designate some spaces, such as classrooms and club meeting rooms, to be gun-free zones.”

It is unlikely that student life would continue as usual if SB 622 were passed.

“They could have underclassmen dorms as ‘substance free and gun free,’” Theofan said, in the case that students over 21 were allowed to carry concealed weapons on campus. “Maybe a concealed carry LLC.”

Information from the article was taken from heraldtribune.com, orlandosentinel.com, miamiherald.com, flsenate.gov.