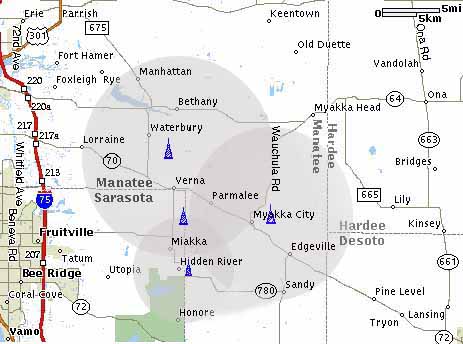 A map of the areas currently covered by Myakka Technologies.

The screeching tones of dial-up were left behind in the 1990’s by most Internet users, but many in rural areas of the U.S. still have no other option. Local independent Internet service provider Myakka Technologies is set to receive $7.9 million in federal funding to expand broadband service throughout the eastern portions of Manatee and Sarasota Counties to eradicate the tones of dial-up.

Currently providing service to Myakka City area residents via wireless connections, Myakka Technologies is expanding high speed Internet access where companies like Comcast, Verizon and Bright House Networks refuse to do business. “It’s a very rural area and a place that big guys didn’t want to bother with because the population density is so sparse, and in that respect it just didn’t make it feasible for them to lay cable or fiber,” Myakka Technologies President Charley Matson told the Catalyst.

Matson estimates that large telephone companies would need to invest anywhere from $20,000 to $40,000 per mile of cable or fiber laid, and with a population density of 14.20 people per square mile according to the 2000 Census, Myakka City isn’t an appealing place for large Internet service providers.

“When we started the business and decided to call it Myakka Technologies, we liked to kid each other and say that when we submitted our application for corporation papers that the people in Tallahassee would send it back and say that, ‘You can’t put those two words together. Myakka and technologies, It doesn’t work,’” Matson said. “We’re totally rural. We have no stop lights in the area, we have no major grocery stores . . . and you can’t even get a pizza delivered anywhere in our service area.”

Even Myakka Technologies matches the small size of Myakka City. Myakka Technologies is comprised of Charley Matson, his son John Matson and Charley’s son-in-lawn Mark Ackaway and began out of dissatisfaction with dial-up. As a programmer in Sarasota, Ackaway made as much use of his work’s Internet connection as he could since living in Myakka City left him with no option but dial-up.

Ackaway called his father-in-law, who moved from Texas to Florida after agreeing to take on the venture and formed Myakka Technologies. Their wireless Internet service “grew over the last 9 years to the point now where we have between 1,200 and 1,300 wireless customers. And we’re getting to the point where the frequencies that we’re allowed to use by the FCC (Federal Communications Commission),” Matson said.

The next important development in Myakka Technologies’ growth and the spread of broadband service to the Myakka City area came this year in the form of a $5.9 million grant and a $2 million loan from the federal government.

The $7.9 million dollars it will receive come from the Broadband Initiative Program which was established under the American Reinvestment and Recovery Act signed by President Obama last year.

In an effort to expand broadband coverage to rural areas across the U.S., the Broadband Initiative Program was created with $7.2 billion to give to small, independent Internet service providers like Myakka Technologies.

While the program initially seemed like a perfect fit for Myakka Technologies, it was structured in such a way that it would have burdened them with too much debt. “No matter how good we thought the project was, it wasn’t going to be able to allow us to pay back 4 million dollars in loans,” Matson explained. “So, we said no. We can’t do it, it’s just not in the cards.”

However, the program was restructured to award companies with a sum that was 75 percent grant and 25 percent loan.”We did the numbers and said, ‘Okay over the life of the project we could pay back that loan, so it’s going to work,’ Matson told the Catalyst. “We thought, ‘It says here we should be pretty much the ideal.’ So we wrote the grant, submitted it thinking we had nothing to lose and if we are like the poster child for this, we have a lot to gain.”

On August 4, the application filing paid off when the United States Department of Agriculture’s Rural Development department announced $1.2 billion were to be invested in 126 broadband infrastructure projects, including Myakka Technologies.

The $7.9 million award will enable Myakka Communications, Myakka Technologoies’ sister company started specifically for this project, to lay fiber optic lines to houses throughout Eastern Manatee and Northeastern Sarasota counties. As a result, Myakka Communications will be able to offer its service areas speeds up to 20 mbps, which is roughly ten times faster than that of New College; and that’s just the beginning. The same fiber optic cables could theoretically offer speeds of up to 2 gigabits per second in the future. Unfortunately, New College will still be outside of Myakka Communications’ service area.

With $5 billion dollars the Broadband Initiative Program has yet to distribute and only $7.9, Myakka Technologies is just a small part in the larger narrative of expanding broadband countrywide as an essential utility.