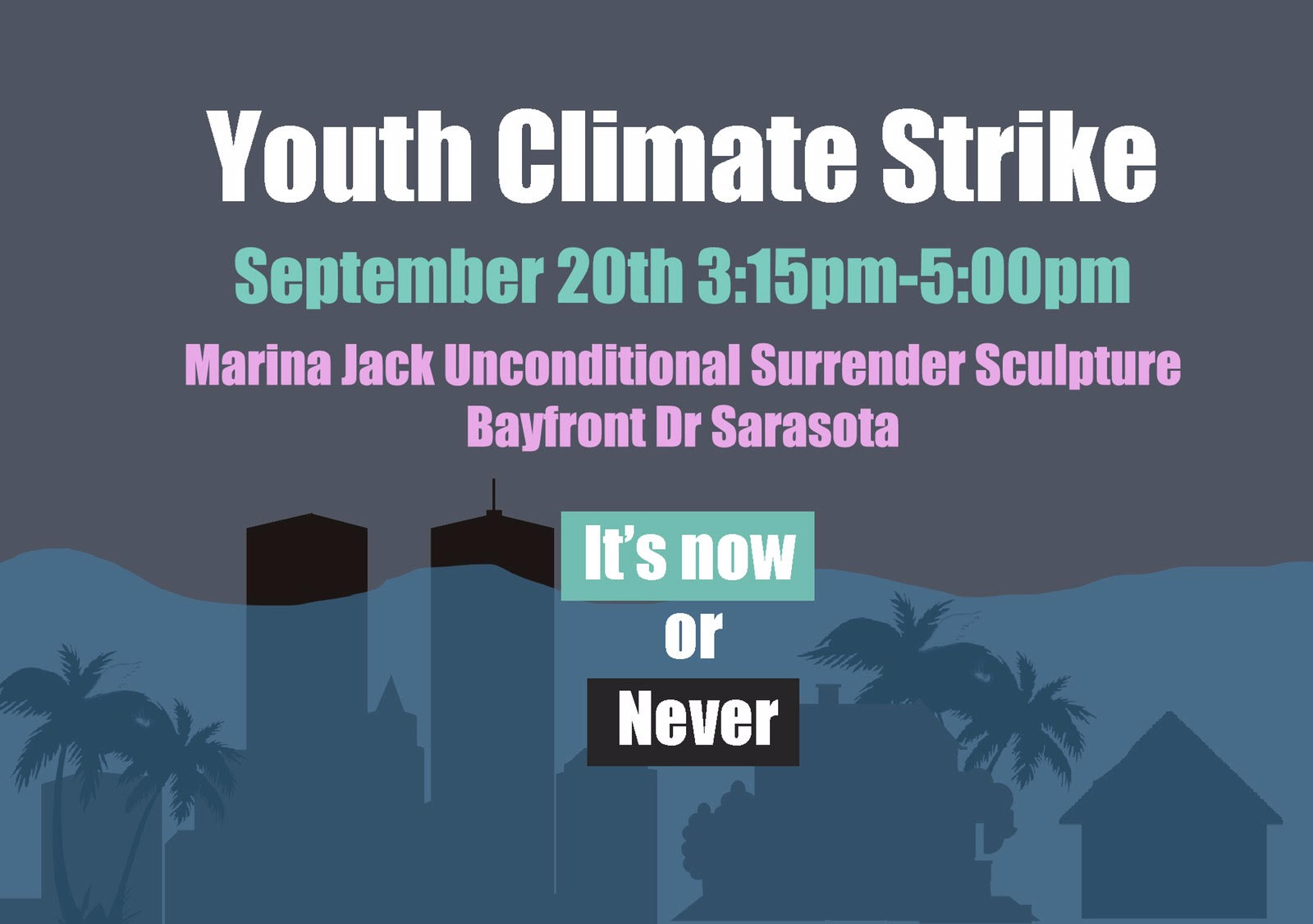 Ella Mirman, a junior at Booker High School, is the lead organizer for Sarasota Students 4 Climate, an organization pushing for climate action and hosting the Sarasota Climate Strike on Sept. 20. Mirman started the group last year after being inspired by Swedish climate activist Greta Thunberg. Currently, Sarasota Students 4 Climate consists of six organizers but hopes to expand to a larger team by including students from across Sarasota county. Now with less than two days to go, Mirman hopes to inspire students to come out and demand climate action.

“For the very immediate future we want as many people to come out as possible for this upcoming Global Climate Strike on Sept. 20,” Mirman said in a phone interview.

The Sarasota Students 4 Climate began with the Fridays for Future movement, a movement that Greta Thunberg started by sitting outside the Swedish Parliament every day for three weeks, sacrificing her education to push for climate action. Fridays for Future called for a global protest on Mar. 15. Since then the Sarasota Students 4 Climate has continued to take action. They hosted a climate march to Sarasota City Hall on May 24, a climate strike on May 31 and a strike every Friday of June and July. Mirman and her fellow organizers recognize the importance of sustained activism to push for climate justice in Sarasota.

“This movement started a year ago and it’s only grown since,” Mirman said. “Millennials realize what the future holds for us, I just think that we’ll become more passionate, more determined and driven to make change and societal shifts.”

Another Sarasota Students 4 Climate organizer Moriya White, a junior at Pine View School, became inspired by Mirman to join the fight for climate action and has since helped lead strikes and provide signs for demonstrators. Mirman and Whites involvement in organizing climate protests reflect the overall ideals of the Climate Action movement that has been predominantly led by youth activists.

“Our goal is to make our voices known,” White said in an email interview. “We are hoping with our dedication government office officials and the voter population will provide accurate representation until we can vote ourselves.”

With a shared feeling that the time for action is now, climate activists around the world feel a global student led movement will be enough to achieve the action required for a sustainable planet. Mirman and White actively believe and promote these ideals as they continue to look for opportunities to expand and promote their local movement. A student-led grassroots movement in Sarasota county is cause for motivation among young activists to get involved.

“The strikes are finally getting publicity,” Mirman said. “If every student in the world left school in order to go strike for climate action it would make a statement. We can’t be ignored if we are sacrificing our education.”

At New College, The Council of Green Affairs (CGA) has already made plans to transport students to the Sarasota strike by setting up ride shares and hosting sign-making events. CGA co-presidents and thesis students Liliana “Lili” Benitez and Nora Flower have actively supported the Sarasota Climate Strike and have collaborated with Professor of Economics Mark Paul to host a teach-in inside Sudakoff to discuss climate change and how New College as a community can work to combat its effects.

“A big part of making change on campus is encouraging students to get involved and engaging administration and faculty,” Benitez and Flower said in an email interview. “The majority of students are aware of the climate crisis and want to see positive change but don’t know how they individually can get involved. We hope to give them clear paths to make their voices heard and contribute to projects and movements that make real changes.”

Currently, the CGA works as a branch of the New College Student Alliance (NCSA) to handle the money gained from the Green Fee, which every student pays to contribute to campus sustainability. However, as a result of a lower incoming cohorts, this year’s CGA budget was smaller in comparison to previous years. Regardless of budget, Benitez and Flower are assisted by a dedicated team of eco-reps who work hand-in-hand with residential advisers (RAs) around campus to educate students on living a more environmentally friendly lifestyle.

“The eco-rep philosophy has evolved over the last couple of years, so we are still trying to solidify it into what we want it to be, but we really wanted to focus on working with RAs to make residential life more sustainable,” Flower said.

Both Benitez and Flower, like Mirman and White, promote and encourage students to get involved in the effort to achieve climate action, whether it be here at New College or in Sarasota County. With student activists leading the charge for climate change and a now or never mentality, a wave of change can be felt in the Florida waters.

The Sarasota Climate Strike will take place in front of the Unconditional Surrender Statue at Island Park from 3:15-5 PM