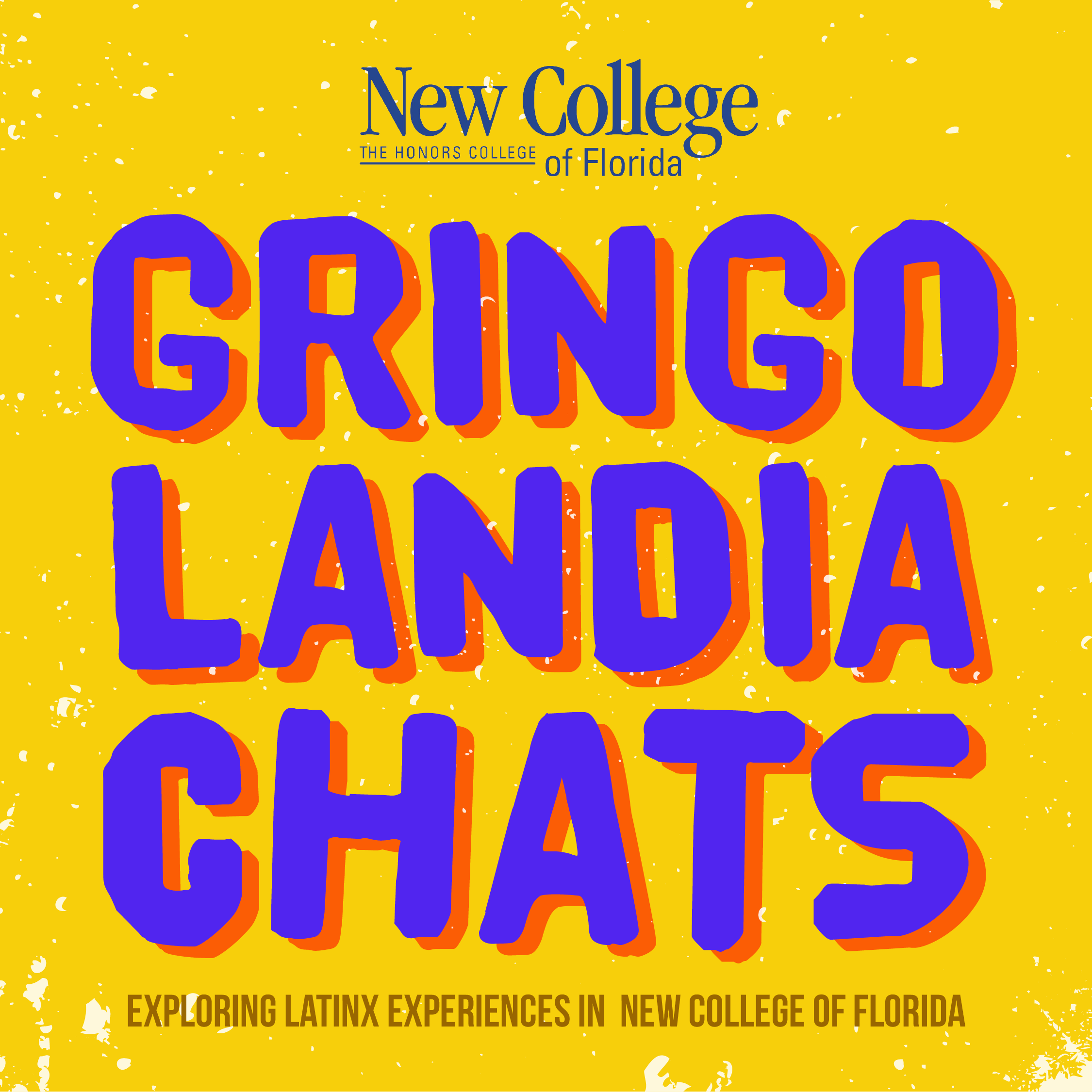 The logo for Gringolandia Chats, produced by Making a Better New.

In a year that can be characterized by forced isolation and a yearning for connection, thesis student Elizabeth “Liz” Mena’s Gringolandia Chats stitches together a quilt of stories and experiences that bring the New College Latinx community closer together. Having released its latest episode—”Episode 4: Brazil”—on Sept. 8, Gringolandia Chats is a tender, dynamic and informative podcast that seeks to explore Latin American identities in New College of Florida.  As a branch of the Making a Better New podcast series, Gringolandia Chats expands upon the theme of promoting open conversations on inclusive and often sensitive topics, and is available on most podcast streaming services, including: Spotify, Podbean, Apple Podcasts and Google Podcasts. A collaborative series, the show regularly incorporates voices from students and faculty. However, one constant voice throughout the series belongs to Mena, the student leading this project.

“The idea of the podcast was not necessarily mine,” Mena said. “I was sitting in with Latinx faculty who were planning for Latinx Heritage Month of last year, and two faculty members—Hugo Viera-Vargas and José Martínez—were really thrilled about the idea of creating something that was for Latinx students and viable in a pandemic, but that still promoted conversations about Latinx identity and being Latinx on campus.”

Mena emphasized that she was deeply thankful for the support she has received through working with Viera-Vargas and Martínez, as well as their contributions to the success of the podcast through their music and representing the show from a faculty position.

“They wanted it to be for students, by students: which is where I came in and said ‘I guess I’ll do it!’” Mena continued

Episodes are based on themes that span intersectional topics, approaching Latin American identities from a multifaceted perspective. Each edition of the podcast serves as a platform for hosting rich discussions on issues ranging from the difference between “Hispanic” and “Latinx” labels, to immigration stories and memories or to the role that language plays in structures of identity within Latin communities.

Mena explains that while the series is meant to help create spaces of community and connection for a particular identity group at New, it is also meant as a way to inform others about particular issues relating to the Latin American experience.

“While this is very much for Latinx students and faculty, I thought it would also be cool if we could act as a resource for other people who were not part of our community to learn, but in a way that didn’t burden us to ‘teach,’” Mena added. “ I wanted it to be a very relational experience.”

The series begins by tackling distinctions between the terms “Latinx” and “Hispanic” and New College student’s experiences with each of the labels, as well as their origins.

“I think it is funny because ‘Latinx’ wasn’t something I was using until I came here,” Mena noted. “Both the faculty members I was working with and myself were wondering, ‘Where does that term come from?’”

Mena highlights that it is important to consider that Latin American individuals embody a plethora of intersecting identities, and that it is necessary to develop language which honors that.

“There is the gender neutral perspective of ‘Latinx’ which is also important in a Spanish speaking, or a Portuguese speaking world where the language is gendered,” Mena said “[The term] ‘Latinx’ offers that same opportunity to belong to some community without having to compromise your identities.”

When asked what moments or interactions in the podcast interviews resonated with her the most, Mena had a moving reply.

“There was this one question that I asked for all interviews, regardless of topic, which was, ‘What makes you the proudest when you remember where you’re from?’” Mena said with a smile. “Those responses… man, let me tell you, they never ceased to surprise me. It was really cool to see the look on all of their faces because they always made a ‘sigh.’ There were so many different responses, but I never got tired of hearing them. It was very wonderful to see how people interpreted the question, and how they answered it. Sometimes both of us would be tearing up as they answered it, so that stuck out to me the most.”

Although the conversations and topics may change, Mena strives to ensure that the core message that connects them stays the same: building and celebrating Latinx community at New College.

“I don’t think you see too much of this kind of thing in an academic, college setting,” Mena said about the importance of a young Latina woman leading this kind of work. “Also, online, you see a lot of men doing podcasting. That is why it was really important for me to use a more relational structure when coming into this, rather than an analytical structure. I’m not trying to analyze anything, I’m trying to meet people and hear their stories.”

Mena said that she believes that it is this welcoming structure that made students more receptive to talking about such personal and complicated topics in a public format.

“I have to give them credit for being so willing to talk to me about their experience,” Mena said. “It can be a very vulnerable and scary thing, especially in the context of an isolating identity situation on a primarily white institution (PWI) campus. That is what makes this even more important, I think. It isn’t about me, it’s about an ‘us’ type of thing. I have to give credit to the representation that they also all offered me and Gringolandia Chats, which is why I think the project was so beautiful.”

In looking towards the future of both Gringolandia Chats and general Latinx programming at New, Mena was enthusiastic. With Latin American Heritage Month having begun on Sept. 15, she encourages students to attend the Latinx programming that will extend throughout the rest of fall semester.

Mena also underlined the importance of finding a balance between programming that centers Latinx issues and programming which celebrates joy and creativity in Latinx identity.

“A lot of events will reflect on the struggle that the community faces, but I also want to highlight the events that are going to showcase our vibrance, our talents, our diversity, who we are—that represents all aspects of us, and not just the trials we face,” Mena said.

One upcoming program will be “Music in Transit: Music and Mexican Migration”, showcasing Latinx talent on Sept. 23, as well as “El Mercado de las Identidades” which will be in early October and showcase the art, music and food of New College Latinx students.

“I encourage Latinx students to support these events, as well as all New College students,” Mena said. “They are going to be very fun, engaging, and very informative.”

As for the podcast, she hopes that this series will remain a New College project and a fixture of campus diversity work even after she has graduated.

Mena reiterated that there will be future episodes that are in-the-making and to keep an eye out for them throughout the year.