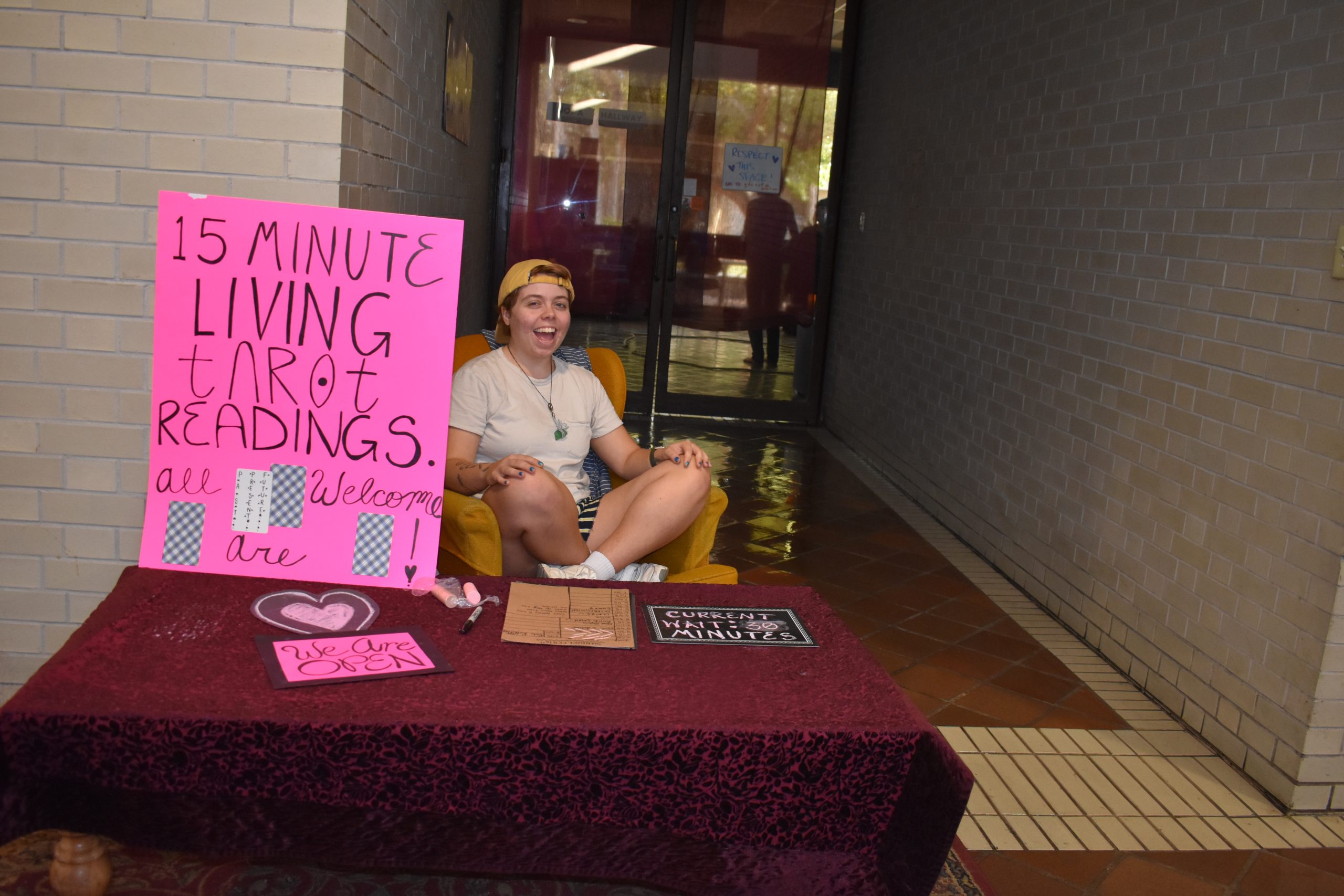 Thesis students Erin Everdale, Julian Hunter and alumni Jules La Rosa’s create the beat for the Magician tarot card’s frenzied polyrhythm; their hands bang spoons and knives on metal cups in one of the 22 scenes that makes up Everdale’s haunting “living tarot” thesis production. Thesis student Alexandra Barbat perches on the couch nearby, ready to jump to action at any moment. This interactive, experimental show took place over the course of Valentine’s Day weekend—a ripe time for tarot readings addressing questions of love and loss among the New College community.

Tarot reading is the practice of using tarot cards to gain insight into the past, present or future by asking a question and interpreting an answer based on the cards drawn. The 22 scenes in this production were written to represent each of the cards from the Major Arcana tarot deck.

Audience members were led into the performance area alone by thesis students and High Priestesses Cait Matthews and Olivia Siegel, who provided the structure that facilitated the entire performance. The High Priestess instructed audience members to draw three cards from the deck and announced each card to the performers one at a time. One card represented the past, one the present and one the future. Following the drawing and the dinging of a triangle, the actors embodied the scenes written for each of the cards pulled, creating a striking and intimate performance unique to the individual audience member being read.

Thesis student Evan Murdoch was astounded by the amount of effort and creativity put into each scene. Her cards for past, present and future were the Emperor, the Fool and Judgement, respectively. Murdoch felt that she could apply all three to her life at that moment.

“Remembering that you can interpret the cards in so many different ways, and that they can be applicable to any moment in life and being intentional in your interpretations is so important,” Murdoch reflected after her reading.

Everdale’s motivation for choosing tarot readings as the basis for their thesis, which was originally about Joan of Arc, stemmed from a fascination with myth and mysticism. Tarot fit that bill as well, providing the perfect foundation for the collaborative, intuitive acting and writing process Everdale wanted to facilitate.

Barbat, Everdale, Hunter and La Rosa wrote four to six scenes and each acted in some capacity in all 22. La Rosa created the reverberating synth tones that set the mood for the performances, but neither he, Hunter nor Barbat had much experience in theater, although Barbat did improv with Comedy Friends. Barbat participated in the production despite her lack of experience with scripted theater to support Everdale, her friend since their first year.

A recurring theme among the performers was the importance of trusting the creative process and maintaining an openness to experimentation. Barbat was apprehensive during the days leading up to the performance but elated once the group was in front of an audience as everything fell into place.

Describing English, Theater and Performance Studies Professor Nova Myhill’s advice to them, Everdale reflected that “you can’t make somebody get ready for an audience, they just have to feel what it’s like to have an audience member in the room, and that’s what changes everything.”

“It was a great learning experience for how much faith you can really put in people’s abilities to create good art just by making the space and time to do it with each other,” Everdale said.

Since it was such a small production, each of the cast members did a little bit of everything, culminating in a unified yet distinct group production spearheaded by Everdale’s creative direction.

“Tarot is a really fun way to put yourself in conversation with a part of yourself that we often get disconnected from,” Everdale explained. “The same goes for acting, and for art—anything that bridges that gap between the conscious and unconscious.”

Everdale’s goal was for their audience to leave feeling hopeful and optimistic, able to pull their own meaning from each scene.

“You can’t force somebody to have a mystical experience, but you can build the container for one and let people come in.”