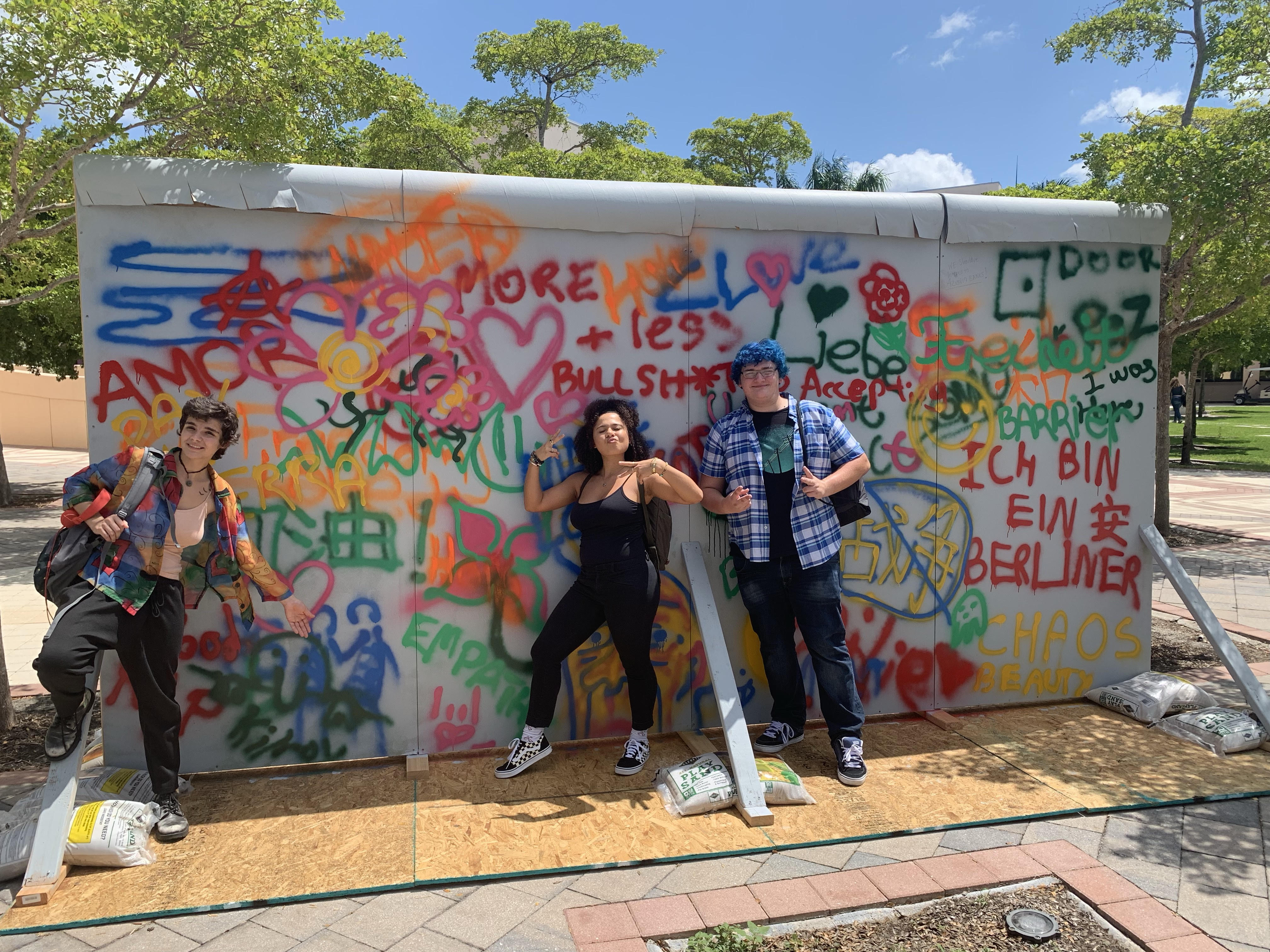 The collapse of the Berlin Wall is one of the most notorious events in recent history with the well-known Ronald Reagan declaration, “Mr. Gorbachov, tear down this wall.”  Nov. 9, 2019 marks the 30th anniversary of the Wall’s collapse and German studies Professor Lauren Hansen’s Berlin Wall in German Literature and Film class has erected a replica of the wall in ACE plaza.

After World War Two ended, Germany was divided by the Allied Powers into four quadrants, with East Germany (the German Democratic Republic, or GDR) belonging to the Soviet Union and West Germany (the Federal Republic of Germany, or FRG) being split among America, Great Britain and France.  The Berlin Wall was initially constructed in part to interrupt massive population flows from East Germany to West Germany, since quality of life was generally better in West Germany.

“The Wall was actually around West Berlin,” Professor Hansen said.  “West Berlin was like an island.When you think about it, it was really West Berliners that were walled in, but West Berlin was democratic and you had freedom of the press, for example.”

The wall itself was explicitly designed to keep people from getting over or under it, with a rounded off top that was slick and hard to grasp, floodlights, over 300 watch towers with armed soldiers and guard dogs. There were only six border-crossing points.  The wall quickly became a jarring symbol of the Soviet oppression of East Berliners.

“They had a lot of sophisticated ways of making sure nobody got to [leave].  It got increasingly sophisticated over the years. It started with barbed wire and the building bricks and adding more to the barbed wire,” Professor Hansen shared.

Economist Frank Heilan discussed the population flux after the Wall fell in his 2003 article ‘The Collapse of the Berlin Wall: Simulating State-Level East to West German Migration Patterns’ published in the monograph Agent-Based Computational Demography.

“From July 1989 to June 1991 about 675,000 East Germans, or roughly 4.1 percent of the population of the former German Democratic Republic, emigrated to West Germany,” Heilan wrote.

“During that period, unemployment was on average lower in the East than in the West but it had already taken-off at an unprecedented pace. Before thc summer of 1989 there was essentially no possibility for a person to emigrate from the German Democratic Republic to West Germany before retirement.”

The Wall created political polarization within Germany, pitting the communist East against the capitalistic West that remained after the Wall fell.  Professor Hansen likened this polarization to the current political climate of the United States, mentioning the border and immigration issues with Mexico.

“It’s important especially now to study the Berlin Wall because of the forefront of borders in the political arena and talking about the US/Mexico border and keeping people out who want to make a better life for themselves,” Hansen said. “We see history repeating itself.”

“It’s super important to learn how violent it really was.  So on the one hand, this project is supposed to be fun and bring students in to have fun and come together.  On the other hand, I want to keep in mind that the Wall was very violent. We see that going on now with families separated at the border [of the US and Mexico] and losing their lives.”

Professor Hansen also compared the Berlin Wall with other current political crises, such as the conflict between Israel and Palestine, North and South Korea and the annexation of Crimea by Russia being among the examples.

“Even if it doesn’t include a wall, the Berlin Wall encapsulates a lot of these recurring ideas and themes,” Hansen said.

The replica of the Berlin Wall carefully oriented so the side with the graffiti facing the West and the bare side facing the east.

“It was fully intentional [that the western side of the wall is the only side painted with graffiti] and the eastern side is blank, because you couldn’t get close to [the eastern side] without being shot or blown up by a landmine,” Hansen stated.

Professor Hansen expressed excitement from the level of student-engagement already made with the wall, talking of the different drawings and phrases in different languages painted in bold colors and fonts.  In the bottom right corner of the replica, one can read the phrase “Ich bin ein Berliner,” or “I am a Berliner.” This was a famous line spoken by President John F. Kennedy in 1963 when he visited Berlin. It was meant as an empowering exclamation of freedom.

Professor Hansen and her class are excited by the traction the wall is getting now that most passersby know that it represents the Berlin Wall.  They look forward to the opportunity to educate the New College community further on the issue.

Information for this article was gathered from link.springer.com and berlin.de.