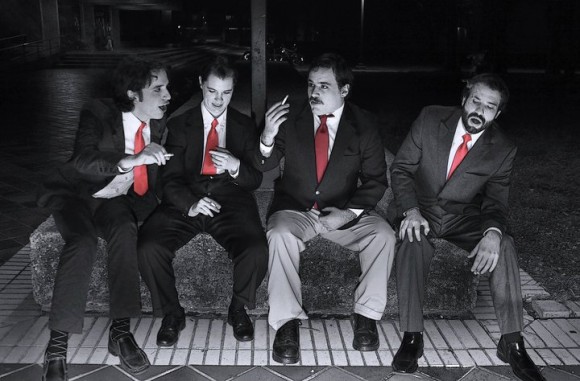 All photos courtesy of Wyatt Kostygan.

Aaron Amram is ready to take on the difficult questions. Why else would he, a thesis student with an Area of Concentration in humanities, come to write a play about Nixon’s conversations with staff on April 13, 1973, ending with Nixon keeping Henry Kissinger on hold to sway and hum along to Tchaikovsky’s first piano concerto.

During his second year at New College, Amram was roommates with thesis student Alex Cline, an actor in the play. The way Amram put it, their desks were next to one another. They did homework while Cline streamed the Nixon tapes from websites Nixontape.org and Whitehousetapes.org–Amram’s primary sources when he later began writing his documentary play, Don’t Listen To What We Say, Watch What We Do. Amram thought the Nixon tapes were weird and, possibly, good art.

From there it was a matter of two years of research, a January ISP to the National Archives in Washington DC, which houses 4000 hours of “fragmented and almost unavigable” Nixon tapes, and inspiring classes like Race and American Identity, which Amram credits with “greatly impacting the way he thinks about an American social milieu.” 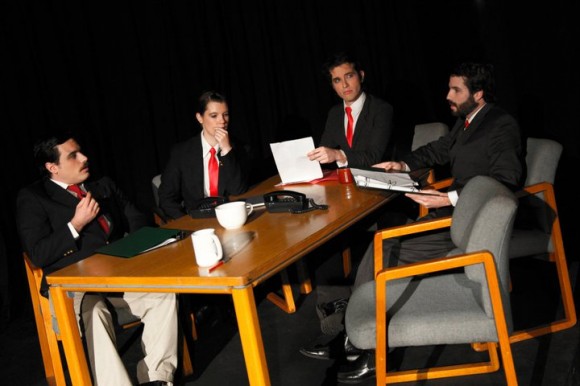 Excited, fast-talking, clean cut and seemingly guileless, Amram spoke the day after his play’s opening night in New College’s new black box theatre. (Showing February 9 and 10th. ) New College Graduate Randi Reams, is the director, and thesis students Sarah Stovall, Alex Cline, Michael Anderson and Dolan Cochran are actors, switching between various roles, including the red tie-wearing Richard Nixon. The cast alternated each playing the various roles.  Effectively, the switch between actors of the red tie was Director Reams’ characteristic gesture that informed viewers an actor was to be Nixon proper. “She really beat the slowness [of the gesture] into us,” Cline said.

The play was set in two acts and featured conversations between Nixon and staff, selections made by Amram from speeches, phone conversations, audio tapings as well as diary entries which were read by the actors. “The thing to remember when you’re trying to act like these people is that they are all vile despicable men,” Cline said.

“The subtext of the entire play is that Kissinger is Nixon’s boyfriend,” he added, more seriously. 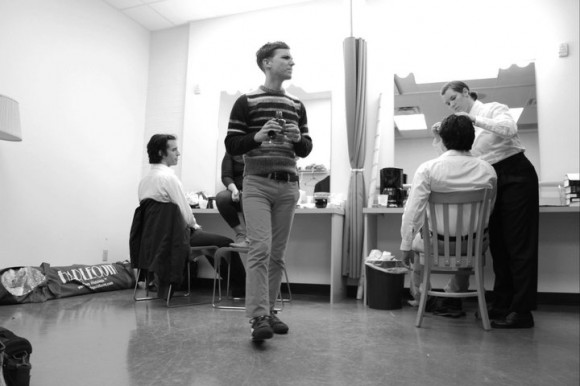 “Who was Nixon?” was a pivotal question for Amram who felt that while his parents experienced Nixon first-hand, his generation got only the old bath water, in which the Nixon scandal and his fall have consistently held mass media appeal. “Until I started dealing with the tapes, I don’t think I knew Nixon outside of anything but reference or parody, ” Amram remarked. What he found is a complicated Nixon. He’s managed to stay mysterious for 50 years.

But why should audiences care about Nixon, about the tapes declassified in 2009, about the genre of documentary theater? According to Amram, who is writing his thesis on the genre, documentary theatre is socially councious. “When your using sources from the real world, what kind of material are you going to be using?” You’re going to use things that grab people,” he said. “What are the issues?” People should react, if not feel something. It’s not just a story for the history books.

Student audiences agreed that it was really cool to see a playwright (Aaron) getting started. It’s part of what made the play so very delicious to watch.

The play may show again during All Power to The Imagination and Amram will try to show it at the National Archives, after graduating.